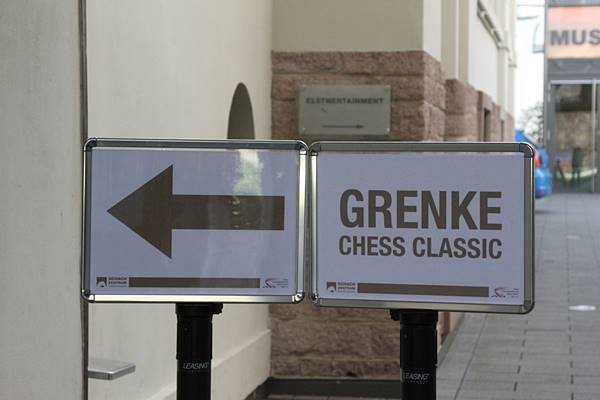 After a quick taxi transfer beetween Karlsrühe and Baden-Baden during the rest day, I took residence in a town and an hotel that I get to know pretty well ! The next day, I approached my game against Carlsen half a point ahead of him, but with black.

4th round: Carlsen (2843)-Mvl ½-½
I didn’t really expect him to enter this variation of the English opening ; especially since after the game, he said he had something special in mind, which he finally didn’t play. I don’t know what happened exactly, because he looked rather well prepared in this variation, which requires to remember very specific moves. I had already analyzed the exchange of Queens, a new try for white, and his later choice of sacrificing a pawn by 17.d6+ Kxd6 18.Rad1+ Ke7 19.Be5 wasn’t an easy follow-up to find, but it was certainly the best practical chance.

Thanks to this good prep, I never left my comfort zone, though it was not so trivial to keep things even. Observers might have expected more suffering from me against Magnus, who loves that kind of endgame, but I feel I found the precise moves to neutralize him rather quickly !

At the end of the tactical sequence, he uncorked the excellent 25…g5!, which looks anti-positional but locks down the position. I should have tried 26.Kh2 (idea 27.Rg1) 26…h6 27.h4! in response, as Levon mentioned after the game ; white can still continue to press, but it probably wouldn’t have been enough against an accurate defense.
Then, I didn’t play well the ending that followed, notably when I foolishly decided to trade rooks. In fact, after 28.Rd1?, I was the one at risk in this Bishop endgame where my pawn on a5 falls, even though it holds by a hair’s breadth ! And yet, instead of 28.Rd1?, almost any move keeping the Rooks on the board would have guaranteed an immediate draw…

I completely forgot that after 15.Rf1 Nd3, white was not forced to play 16.h3 Be6 17.Nd4 which leads to a draw, but had the strong 16.Nb3! at his disposal, after which I had to suffer for five hours before to salvage the draw.
Instead of 14…Rfd8?, 14…Nbc4! would have prevented white to establish a Knight on d4, and after 15.Nxe5 (15.Nxc4? Nxf3+) 15…Nxe5, black has adequate compensation for the pawn. Afterwards, I think I defended rather well the difficult position, but I could have spared myself sixty additional moves !

7th round : Mvl-Caruana (2784) 0-1
Against Fabiano, I decided not to face his new weapon, the Russian defense.
But I didn’t expect him to play the …Bb4 variation of the 4 Knights English. I took time to decide how to react and how to handle the position, the more so as my theoretical memories were a bit distant ! After hesitating quite a lot, I finally chose one of the safest lines, 9.Qc2, which is obviously also one of the less ambitious ones. By the way, I had forgotten during the game that the theoretical reference after 11…Bf5 was a game of mine ! (against Van Wely in 2008, draw in 37 moves -Ed.).
Anyway, I quite liked my position after the opening, and that’s why I tried 14.Qb2, followed by the unorthodox 17.Bf1!?, to try keeping the Bishop pair in the long run.

But I lost too much time immediately afterwards, with two moves in a row which didn’t fit together, 18.a4 and 19.Rac1 ; I could have played 18.a4 and 19.Qb5, or 18.Rac1 and 19.c4, perhaps even 18.a4 and 19.c4, but not the combination of moves I chose !
Actually, in the course of the game, I underestimated the strength of 20…Qf5! because I hadn’t anticipated 21…Qc5+ at the end of the variation. Thus I was adequately punished, as Fabiano could even choose beetween the actual 22…Bd5, which does the job, and 22…Bxf3+ 23.exf3 Qf2!, which also wins.
Of course, this game remains a disappointment, and that day was clearly not mine, but it is no disaster either ; I just tried something different in the opening, and it backfired.

8th round: Bluebaum (2631)-Mvl ½-½
I didn’t really anticipate to face this brand new fashion line in the symetrical English, with 5.e3 and 6.dxc3, which is no great danger to my mind. I even thought he was going to exchange all four rooks at move 18, leading us back home very promptly ! With his move 18.g4!?, he gave me new hopes of creating something, but it wasn’t to be enough. At the end, I must say I’m not that far, but he still holds an impregnable fortress, because not enough lines are open in the position.

9th round : Mvl-Meier (2648) ½-½
There again, with white, I wanted to change. I was rather pleased with the position which came out from this atypical Reti opening, with my rare 6.Qd3 opposed at his early …b5 ; indeed, there was room for creating imbalances, against a black setup which looked a bit passive.

I must confess that Georg reacted pretty well, proving that he knew that kind of setup and its ressources. He succeeded in playing the freeing 21…c5, even though I thought I could reduce his pieces to extreme passivity with my pawn sacrifice 22.Rec1 cxd4 23.Qd3, in particular with the Nb8 which could hardly move.
But in this kind of dynamic equilibrium, I was the one who ultimately found himself in bad shape, because of my try to force events with h4-h5… At the end, I had to be precise to earn my half point.

All in all, I would define this tournament as a sort of dress rehearsal one, with an average result at the end, but very interesting games, which is rather good news in view of the season’s follow-up.
Even if I messed up a bit with white at the end, my opening prep was satisfactory on the whole. Especially after a few months break from the highest level, since I probably had less fresh ideas in store than other players…
However, I was suprised to lack energy at the end ; I was rather expecting to struggle at the beginning of the tournament to find my form.

Kudos to Fabiano for the impressive achievement of scoring twice, Candidates and Grenke !
Next rendez-vous, the Norway Chess in Stavanger, with the opening blitz on May 27, and the tournament from May 28 to June 7.

[otw_shortcode_quote border=”bordered” border_style=”bordered” background_pattern=”otw-pattern-1″]Take me homeThe rail strikes in France didn’t interfere with Maxime’s travel for the Grenke tournament in Germany. Indeed, he took the train for his outward trip just before the strikes began ; and as for the return path, it was scheduled on Tuesday, April 10, a right timing as this day was spared by the union calendar… But others in Baden-Baden weren’t that lucky, although they were not heading towards France ! It turns out that the ground staff of four huge german airports, including the nearby Frankfurt hub, were on strike that day, forcing Lufthansa to cancel more than 800 flights ; among them were numerous long haul ones that some of the players were supposed to catch in order to fly back home. About star chess24.com commentator, IGM Jan Gustafsson, who had planned to fly directly to Thailand in order to play in the Bangkok Open, he lamented himself during the last round show, unable to know if he would be able to make it to Asia the next day ![/otw_shortcode_quote]