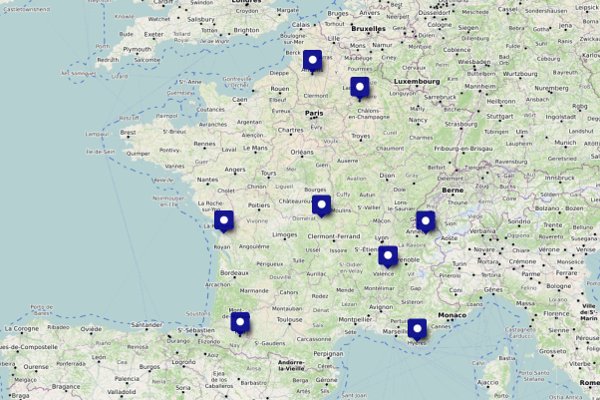 It’s a quiet period before the next tournament, end of April in Norway. I take this opportunity to recharge batteries, think about what lies ahead… and train !
At the present time, the French Youth Championships 2018 are taking place in Agen (south west), with almost 1.600 youngsters gathering during one week. I thought it was a good moment to introduce « my » Youth Championships, which I played uninterrupted for eight years, from 1997 to 2004.

Being beetween 6 and 13 at the time, I don’t necessarily recall precise memories, and I most certainly forgot a lot of details. But I keep nice recollections of these tournaments, even if I couldn’t enjoy them as a teenager. Moreover, I seldom played in my age category, as I was often upgraded, and found myself with people older than me. Well, as I was already used to moving around during my games, I still was able to spot a few familiar faces !
My eight Youth Championships have been evenly spread over France, which enabled me to visit the country with my parents and sister !

Here is a quick overview of these tournaments…

I was 6 and it was my very first French Championship, at the end of my first season in a chess club. My first two tournaments had indeed been the Val-de-Marne and the Ile-de-France U8 championships, through which I qualified narrowly ! When I arrived in Montluçon, I had no specific ambition of winning the championship ; so I played, and I was just happy when I was finding a nice combination and won !

But I started winning against the favourites ! Among them, I mostly recall Edouard Bonnet (great frenh hope of years 2000, who doesn’t play a lot anymore, but now excels in computing science ! http://www.lamsade.dauphine.fr/~bonnet. In the U12 World Championships 2001, he ended up =2nd in the same group than Maxime, just behind no less than Karjakin ! -Ed.). I took the lead of the tournament, and the titled came in as a surprise for everybody, including myself !

I was 7 and starting to get reasonable results. Therefore I was upgraded in U10 and, even if I wasn’t aware of it at the time, I didn’t have the solid technical background required to challenge the very best in this age category. Indeed, some of them had already celebrated their 10th anniversary.

The tournament began well (3.5/4), and then I lost round 5 after playing the Morra Gambit against the Sicilian. From memory, it was an improvisation on the board. I finally got my gambit pawn back, but with a devastated position ; it was my first and last Morra Gambit ever ! (this game was played against another promising youngster, Helder Frade Marques, who will end up stopping chess when a teenager). A further loss in the tournament had me on the 9th place of the final rankings.

I was 8 and I remained in U10 category, once more facing my main opponents of Montluçon 97.

Things began rather well, with 4/4, but then I just blundered my Queen in one move in the opening of my game against Edouard Bonnet ! Probably the worst blunder of my whole career… I still won the next three games, and secured the title with a last round draw, but after an epic opening (see sidebar at the end of the article).

I was 9 and I played in U12. But I was still in the pre-tournament favourites. From then on, I would always be upgraded in the subsequent championships.

In my memories, it was a diffucult tournament, with lots of hard-fought games. You didn’t win material with easy tactics as happened two or three years earlier ! But the tournament unfolded in the most perfect way as I scored 7/7, taking revenge on Frade Marques in the process, thanks to a very well-played game!
However, I lost round 8 against Edouard Bonnet, in a crazy game that began with the Accelerated Dragon I cheered at the time, having worked on it with my trainer, FM Eric Birmingham.

I missed the draw and ended up losing the game, allowing both my opponent and Frade Marques to catch me up at 7/8.
Fortunately, I won the last round, though after a very chaotic struggle, and as none of my rivals did the same, I was able to pocket my third national title without going through the playoffs which seemed to be looming.

I was 10 and upgraded in U14. I started strongly with 4/4, before to suffer a serious setback with three losses in a row ! I wouldn’t have anticipated to break this record one day, but that’s what I actually did in 2015, enduring four consecutive defeats at the Khanty-Mansyik tournament…
I was thus in no position to claim anything for the rest of the tournament, and despite two wins in the last two rounds, I ended up at a humble 12th place, my worse result of all youth championships.

I was 11, but I still went up to U16 category, the more so as I had the best U16 rating in France (2278 -Ed.). I remember the tournament was tense all along. The resistance level of my opponents had grown much higher, but I didn’t burst into flames as I did the previous year in Amiens ! In the end, I scored 7/9 with four draws, as did three other players, Xavier Beudaert (today rated 2275 -Ed.), Jean Netzer (IM, 2410 -Ed.) and Kevin Bordi (2288 and chess commentator on Internet, https://www.youtube.com/channel/UCcXH6W9ey_h8LEx2lFxp5fg/featured -Ed.).
So I had to participate in my first playoff, and not a head-to-head one ! I recall having 1.5/2 and Beudaert 2/2, and that we met in the last game, title at stake. A draw was enough for him, but I went on to win, and earned my fourth title.

I was 12 and I played U18 as I once again had the best rating (2382 -Ed.). But I started badly, notably by scoring a meagre 0.5/2 from the traditional 2 rounds day, the one of rounds 2 and 3. So I had to play the rest of the tournament as an underdog, and ended up at a reasonable 7/9, even though it wasn’t enough to get the title, earned by Matthieu Cornette. I still had to contest a playoff for the second place, which I won. From memory, I got points from rook endgames, and I have in mind a R+P f/g vs R+P h !
At the time, I felt a bit disapointed by this second place, but objectively, it wasn’t that bad, especially if you look at the beginning of the tournament.

I was 13 and I played in the highest category, U20. It was to be my last France Youth Championship. Things went on quite well all along in Reims, but I must admit that 2004 was a year during which I had a huge boost in terms of playing level. We were four favourites, all rated beetween 2400 and 2500, with Matthieu Cornette, Sébastien Mazé and Fabien Libiszewski (all IGMs as of today -Ed.)

I started with 4/4, including a win against Fabien in a very complex Trompovsky. I then drew with Sébastien and Matthieu. Before the last round, Seb and I were at 7/8. He drew, and for my part, I defeated another Sébastien (Plantet, who stopped chess two years later… -Ed.), though I had offered a draw he took too much risk trying to justify declining.
Following this title at 13 in the premier class category, I rounded off my history with the Youth French Championships, a few months before to begin another one, in the French National (Adults !), which was to take place in Val d’Isère in August 2004.
But that’s quite another story !

[otw_shortcode_quote border=”bordered” border_style=”bordered” background_pattern=”otw-pattern-1″]FingerfelherRomans-sur-Isère 1999. Before the last round, Maxime is on 7/8, leading the U10 tournament tied with Alexandre Pottier (one more player who seems to have stopped chess when he was a teenager !). He loses his last round game, and Maxime is black against Julien Hirth ; a draw would be enough. Against 1.d4, he’s ready to play his then usual Tartakover Queen’s Gambit (yes, he was not yet a Grünfeld enthusiast, and not even a Najdorf one !). So he plays 1…d5, writes down his move, and raises his head to realize with horror that he had in fact pushed his pawn 1…e5 ! You can easily conclude that, already at 8, Maxime was not a fan of morning games ! But in spite of this improvised Englund Gambit, Maxime will pocket the half point needed to secure the title.[/otw_shortcode_quote]