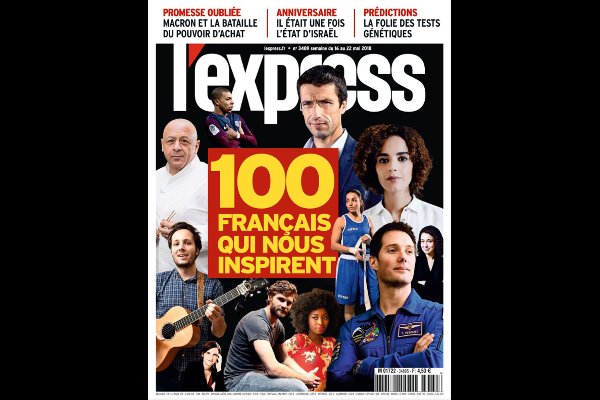 L’Express is one of the biggest french magazines. Incidentally, it celebrates its birthday this very week.

As soon as november of its first year (1953), the weekly already published a « list of 100 », which offered a review of the hundred french people « who map out roads for the future ». In 2018, L’Express does it again to mark its 65 years of existence : only differences with 1953, parity is respected, and the political field has been excluded. As Guillaume Dubois, L’Express Director, states, the main purpose is to « bring to the fore French men and women who […] believe in their own future and in their country’s future. Coming from a broad range of areas, « reflecting a diversity of careers, of jobs, of sensitivities, and of origins, […] [the 100] are acting », he adds.
And among them, in the section of « Those who act to surpass themselves », you will find Maxime ! Do we have to see a symbol in the fact that he’s just next to Thomas Pesquet, the famous astronaut ?

Still, this recognition constitutes a huge incentive, for Maxime will jump back on the campaign trail in 2019, trying to move through the qualifying stages leading to the world championship match.

Find out Maxime’s presentation below, with the kind permission of L’Express management  (see translation below):

Caption: 27 y.o, chess player. He wants to become world champion.
Text: For the best french chess player in history, #1 at home, and World #5, 2017 was a terrible year. Maxime Vachier-Lagrave narrowly missed a spot in the Candidates, the tournament which selected the challenger of World Champion Magnus Carlsen, for the forthcoming title match in November. Thus, Maxime decided to treat 2018 as a transition year. Among other things, he hired a mental coach, in order to master this touch of impulsiveness which sometimes puts him at a disadvantage, despite his extraterrestrial skills (he belongs to the small circle of those who have reached 2800 Elo points, the method for calculating relative levels of chess players). Our International Grandmaster knows that his creative and sharp play can disarm Carlsen, less at ease than him in complex positions where anything can happen. Maxime has already beaten him, last time the previous year. At only 27, « MVL » has plenty of time ahead of him. But it is out of the question to miss the next opportunities of reaching the « title of titles », in 2020.

[otw_shortcode_quote border=”bordered” border_style=”bordered” background_pattern=”otw-pattern-1″]Titled tuesdayThere’s no way we would miss on this website games played by Maxime ! Thus, let’s have a slight month-long flash back, to revisit the « Titled Tuesday » tournament organized by www.chess.com. As its name indicates, this online blitz tournament takes place once a month on Tuesdays, and is restricted to titled players. Maxime played in the April 17 Titled Tuesday, probably the strongest one so far, with tens of GM’s around. The fact that an Argentinian FM prevailed, before to be banned from the website soon afterwards, contributes to global suspicions over the fairness of online chess…On his part, Maxime first crushed the competition, with 7/7 against 6 GM’s (!), before to give up two draws, and ultimately lose the decisive last-round game because of a huge blunder, even if not without finding ways to fight back (see Viewer below).[/otw_shortcode_quote]