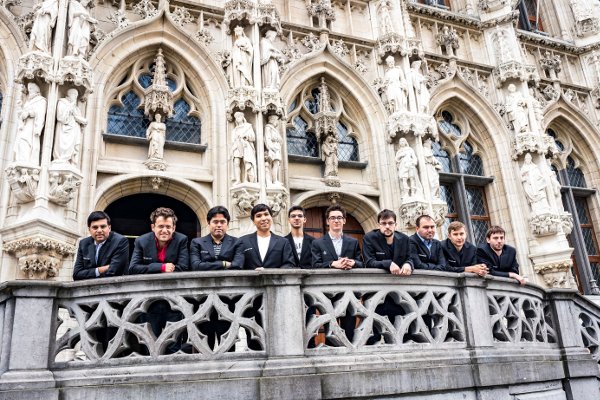 I arrived in Leuven after a quick stop in Paris, on my way back from Norway Chess. I was eager to be back on track after a poor showing in Norway.

Day 1
A slow start, as I have to admit I was in dire straits in all three games of the day ! I was obviously not very proud of myself, as I managed to pull through and earn three draws quite miraculously.
For sure, I was dead lost in the endgame against Karjakin.

Then, Caruana missed a win…

And to finish the day on a high note, with white I had to defend a pawn-down Rook ending against So !

Day 2
I approached this second day with the firm intention to do something else than defending inferior endgames !
Against Grischuk, at last I gained an advantage, but a detail escaped my mind…

Thus the position became balanced, except for the fact that I was carried away by a transposition into a Bishop endgame, as I simply forgot about 42…Be8.

And here I am again, forced to defend a difficult endgame, for the fourth time in a row ! I haven’t verified yet, but I guess I was probably lost. However, I’m sure that the pawn endgame which followed was a draw.

Then against Nakamura, I erred in the opening, but he let me back in the game by allowing a very interesting positional piece sacrifice. I got an initiative by sacrificing my Queen!

In the final position, I decided to take the perpetual, as I didn’t see any clear way of playing on without great risks. For sure, the dynamics of the game were a clear incentive to play on, but the position remained particularly unclear.
I closed the day against Anand, and things didn’t really go my way, as I found myself in a sub-optimal version of the « Berlin endgame ». But over time, Vishy let me do what I wanted, and had to transpose into a pawn-down endgame : at last, I was on the right side ! Nevertheless, he defended accurately for a long time, before to stumble in the Rook ending.

He could draw with 46…Rh4, and probably also with 46…bxa4, even if a lot of accuracy would still have been required. But he chose the neutral 46…Kb8?, which clearly is not the solution, as after 77.a5, white is already winning.

Just before the Rapids last day, I had mixed feelings. Certainly, I was at +1, unbeaten, and that was the good side of it. But it was not in a pretty way, which was a bit worrying.
Against Mamedyarov, I easily drew with black. Maybe I could even have stopped him from giving back the exchange and levelling the position.
Against Giri, I succeeded in putting pressure all way long, and that was a rather nice game. My advantage was maybe not tangible, but Anish was suffering in the tournament, and he was calculating less and less accurately.

I ended the Rapid portion with a black draw against Aronian, after a game both very interesting and full of dynamic and complicated options. He took the upper hand, was much better, and probably even winning at some stage. But after I exchanged Queens by 35…Qg6!, although still in danger, I managed to draw somehow.

Day 4
Beginning of the blitz portion, and things started rather well, with a solid draw against Grischuk, and a win against Giri, who once again made a tactical mistake at the end of a game he had slightly dominated.

I just had to consolidate the position, and convert the pawn advantage. After two uneventful draws against Caruana and Mamedyarov, I managed to cause problems to long time leader Wesley So in a technical position. Unfortunately, this type of tiny edge is difficult to convert in a blitz game, because you need utmost precision, and I finally had to share the point once again.

This first day of blitz ended badly, with a 0.5/3 relegating me far away from leader Wesley So… At first, Karjakin didn’t let me any chance, despite minor compensation for my sacrificed pawn. Then, a Queenless middle game played inaccurately put me on the verge of disaster against Aronian.

Finally, against Anand, I had the confirmation that I was not up to the task for a few rounds already, and he never let me escape…
In spite of a good beginning, this first day of blitz was a disappointment, the only good news being that Wesley’s lead in the rankings was slightly narrowed before money time..

Day 5
The morning of the last and decisive day, I decided to play more quickly, in order to increase the pressure on the clock. Of course, this strategy is always risky as you play without safety net in tactical phases. But it worked out pretty well, as soon as in the first game against Grischuk, where I could make a mess with my two minutes vs ten seconds.

Against Giri, I won a pawn at the end of the opening, but contrary to appearances, it was not easy to convert, and I even went through an inferior position, before things settled down. Against Nakamura, I messed my opening up, and white got a nice edge.

After I went back into the game with the exchange sacrifice 23…Rxf4, the American collapsed. Against Caruana, when I got a new opportunity to part with an exchange in order to play for a Kingside attack, I didn’t hesitate for a second !

Afterwards, I think I played the best attacking moves.

I took one minute to play 29…Nd4!, and I calculated the whole line until the winning endgame after 38.gxh5. Against Mamedyarov in the next round, I was a bit unlucky in the critical position.

I saw 30.Nxf6 Kxf6 31.Be5+ Kg5 (31…Ke6? 32.Bc3+) 32.Rg3+ Kh6 33.Rg4 with perpetual.
So I tried to make Nxf6 work better, and I included 30.h4. Unfortunately, I underestimated his counterplay on the Queenside, which is very quick; by the way, I probably should have stopped it with 36.b4 instead of 36.h5.
After a quick draw against an unambitious Wesley So, I got what I wanted to get against Karjakin, namely a position with slight pressure, where you can ask concrete questions. But he defended very well, and I ended up losing my edge, then going for a poker strike in the Bishop endgame.

In the penultimate round, I had up to a three-minute edge against Aronian, which helped me a lot. I could counter his Kingside attack and counter-attack on the other wing, in a game that went perfectly well all way long.
Therefore, before the last round, three players stood within a half-point (So 22, Karjakin and Mvl 21.5). And the most unlikely scenario occured, all three leaders losing to players of the second half ! For my part, I had decided I would have to play for the win against Anand. By the way, the opening went fairly well, and I even got a crushing position.

But in the critical position, I looked at 24.Bb4 Qf6 without seeing any decisive blow, although the crushing 25.Bxb7! Nxb7 26.Rc6! was there ! A small detail which costs dearly…

Anyway, there’s no time for lamentations, as the Grand Chess Tour caravan goes on, with a next step in Paris Canal + offices, as early as Wednesday, June 20th.

[otw_shortcode_quote border=”bordered” border_style=”bordered” background_pattern=”otw-pattern-1″]Autour du tournoiThe games broadcast had a hiccup for the very last round, as at the beginning, Mvl-Anand (0-1) and Mamedyarov-Karjakin (1-0) games were inverted. Those who followed Maxime’s game without having refreshed their browser may have believed that he had won the game and the tournament ! Which, unfortunately, was just a mirage…[/otw_shortcode_quote]