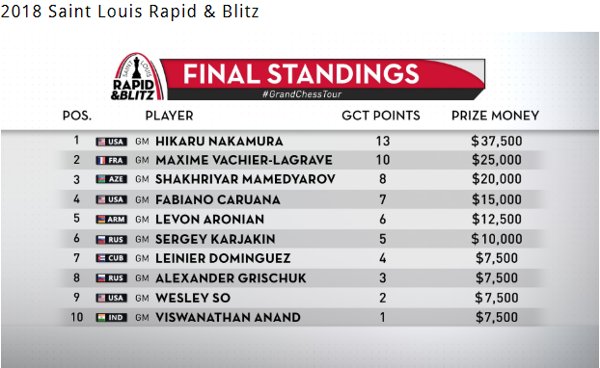 The Rapid & Blitz tournament opened this long August month of chess in Saint-Louis. It was organized on the now customary model of Grand Chess Tour (GCT) rapid competitions, with three days of Rapid games 25/10, and two days of blitz 5/3.

I began the tournament against wild card Dominguez, whit whom I had just played 31 games online a few days before!

But I didn’t remember all the details of the opening, and white got the advantage. Luckily, Dominguez didn’t show enough precision in the follow-up (draw).

Against Anand, for the first time in the tournament (but not the last!), I entered the Berlin endgame. My advantage was minimal, but Vishy somewhat lost the thread.

The third round draw against So is of no great interest, but even in the most insipid positions, there are things you can still look at!

Because of a visa problem, Grischuk landed in Saint-Louis on the morning of the tournament, after a long journey. In our round 4 game, he looked tired, playing particularly slowly, even by his standards! He ended up losing a difficult, but maybe tenable endgame.

With Caruana, we resumed our Najdorf theoretical debate. Even if the opening is not perfect after 18…h5, I got a playable position. The advantage swang from one side to the other, until the final position where I repeated moves whereas I was probably winning!

Here, I quickly repeated moves a second time by 50…Rh2+ 51.Kc1, before to understand that I should have played 50…Qa8+! straight away, as after 51.Rb7+ Kf8, the black Queen threatens to penetrate decisively on a2 with check. In the game, with the King on c1, I couldn’t follow up with 51…Qa8 anymore, because white would have had a dangerous counter-attack with 52.Qf3!, taking advantage of the fact that my Queen no longer penetrates with check! (draw).

Against Mamedyarov, I made an early opening confusion (7.d4?), after which my position was a disaster. I thought I managed to get through at one point because he hadn’t been immediately decisive. But he came back to his senses early enough to cleanly complete the work.

A bad game against Nakamura to begin with…

Then I lost a third game in a row, against Aronian, and it was clearly the most painful one. Despite an opening which was maybe slightly suspicious, I took a decisive advantage with the nice tactical shot 29…Rh2!, and in the following position, I looked for the cleanest way to wrap it up.

After three losses, what I wanted most was to end the rapid portion by mitigating damage. However I got an opprtunity against Karjakin:

With only 4/9 in the Rapid tournament, I was very conscious of the fact that I would have to be much more efficient in Blitz to catch up with the leaders. A good night’s sleep and the prospect of a completely new rhythm of play allowed me to wake up the next morning with a conviction: either I would blow up in flames in the blitz, or I would come free of any pressure and raise my game. There would certainly be no half-measure!

I began the blitz tournament with a win against Anand and a draw against Grischuk. Then, my game with Dominguez was a first turning point:

Here, I made the insane décision of castling Kingside, expecting to follow up quietly with 18…f6, but completely omitting 18.Ng5!, after which my King is too much on his own. The fact that I pulled through in this game allowed me to launch my blitz tournament. (0-1).

After a draw with Aronian, I was in great danger against Mamedyarov:

Instead of 26.Bf3 which lets me breathe, white had 26.Ng5!, idea Bh3, which I would certainly not have appreciated! Then I got a superior Knight ending and, by the way, I quite liked my technical conversions in this blitz portion (0-1).

Immediately afterwards against Caruana, I also converted a minor pieces endgame, which was by no means easy:

Keeping the momentum, I won a third game in a row…

After a black draw against So, the last blitz of the day was against Nakamura. A weird fight, where I earned a clear edge but somehow managed to deteriorate my position at great speed.

Here, the American probably thought he had missed the win previously, otherwise he would never have played 39…Nxd5 40.Rxd5 a1=Q+ 41.Bxa1 Rxa1+ Draw. Instead, 39…Ne8! would have kept good winning chances.

Unbeaten with 7/9 halfway of the blitz tournament, I was back chasing the leaders before the last day… But as early as my first draw against Anand, I felt that things wouldn’t go as smoothly as the previous day. Impression confirmed the next round against Grischuk, where I had a terrible position; after escaping the worst, I got the following position:

When I played 34…Nf6, I had anticipated that the white Queen couldn’t leave the Nc4 unprotected. And when he uncorked 35.Qg2?, I inexplicably answered 35…Qh5? instead of taking the Knight! Luckily, he commited further mistakes, allowing me to end up winning the game.

Maybe the only game where I didn’t convert properly, missing the simple fork 41.Ne7 followed by Rd5+, forcing resignation. Instead, I chose 41.Nf4? Bc2! which makes my task much more complex, because I will have to give up my Queenside pawns. (1-0).

I sacrificed a Bishop on a2 in order to get this position, in which I had calculated 26…axb2 27.Rxb2 Qa5 with a mating attack, forgetting 28.Nc2, which covers everything! I should neverthelees have played this way, as after 28…Rc3, it is not so easy to unravel for white. Understanding my mistake, I preferred 26…Qa5?, but after the consolidating 27.Qd2! followed by 28.Nf4, black has nothing left to play for (1-0).

The next game against Mamedyarov was particularly important, as it was against one of the leaders, just after a loss, and only a few rounds before the end!

I got nothing from the opening and after the normal 18…Nxe5 19.Nxb7, the position would have remained roughly equal. Instead, Mamed played 18…Bg4?!, allowing 19.Bb5 and white is better. This time, I converted a Rook ending a pawn up.

After a good win against Caruana, I had two further draws, quite an obscure one against Karjakin, and a savourless one against So. So I entered the very last round in second place, together with Mamedyarov, behind Nakamura who could already not be overtaken anymore. Only problem, I was black against him!

Even with the tournament’s win in the pocket, the American decided to play a normal game, which turned out to be rather hectic.

It is clear that I played in Saint-Louis the best blitz tournament of my life!

Three points ahead of Nakamura with a 3006 Elo performance, and World blitz #2 behind Carlsen… Of course, I’m delighted but honestly, these numbers don’t matter that much…

However, I’m glad to be #2 in the 2018 GCT standings before the classical and last tournament, to begin Saturday, August 18. I have bought myself a slight margin in order to get one of the four qualifying spots for the London finals in December. But the main goal remains the tournament itself, especially as I have a title to defend!

Lastly, I would like to congratulate Hikaru Nakamura for this victory in the Saint-Louis Rapid & Blitz which follows the Paris one, because I know what it means to win two GCT tournaments in a row…

[otw_shortcode_quote border=”bordered” border_style=”bordered” background_pattern=”otw-pattern-1″]Trash talkingDuring the two free days between the Rapid & Blitz and the Classic tournament, the players were invited to play a part in the now customary « Ultimate Moves ». Joined by commentator Peter Svidler and newly arrived Magnus Carlsen, they were split in two teams of six, « Team Rex » (the benefactor Rex Sinquefield) and « Team Randy » (his son). And the players were supposed to alternate 5-move series each, in blitz games. This event, putting the utmost emphasis on trash talking and good laughs, was eventually won 3.5-2.5 by Team Randy (Carlsen, Anand, Nakamura, Grischuk, Dominguez, Aronian). Maxime was in the losers camp, together with Caruana, Svidler, So, Mamedyarov et Karjakin.[/otw_shortcode_quote]