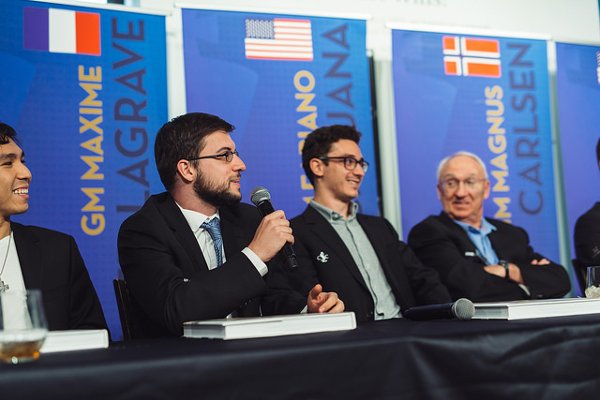 Five draws out of five games for Maxime, in a very fierce tournament where noone has taken a clear lead (five players tied at +1). This is how the Classic Saint-Louis tournament stands halfway, just before Thursday’s rest day, which might well see some players doing battle in another context, ie. a basketball court…

On the whole, Maxime’s games have been rather short, with a lot of theoretical debates, especially in his two black games, where after only a few minutes play, a very specific Najdorf line was reached…

At the end of the previous year, during the FIDE Grand Prix in Mallorca, Maxime played 15…h5 against Giri (in french) (1/2, 31). A few days ago, in the Saint-Louis Rapid, he preferred 15…d5 against Caruana (1/2, 51). But when facing Anand in the second round of the Classic tournament, he once again played cat-and-mouse, deviating with 15…Nxd3+ (1/2, 37)! Finally, round 4, he came back to his first love 15…h5 against Grischuk (1/2, 25).
Four draws with black at this level, from the diagrammed position ; Maxime’s Najdorf is a tough nut to crack! Anyone else for the challenge?

With white, Maxime was also involved in theoretical battles; the first one against So’s Berlin Wall, when he couldn’t take any advantage. And another one against Caruana’s Petroff, whose solidity is impressive since the American first decided to add it to his repertoire, at the end of 2016 (btw, the stem game was against Maxime!).
Both players expressed afterwards the feeling that white had got a slight but insidious pressure, despite the apparent symetry of the position.

Anyway, very serious and precise play from Caruana allowed him to keep the equilibrium all along.

Eventually, the only game which went outside the trodden paths was the one against Carlsen, at the very beginning of the tournament. After five mere moves, both players had succeeded in getting a new position from the Sicilian Defence !

Despite the weakening of his light squares after 5…h6 6.h5 g5 7.Nh2!, followed by Nf1-e3, Carlsen never really seemed in trouble in that game. What would have been said though, if an amateur had played this way with black!
The game finally concluded on a logic draw, Maxime’s Rooks being worth the World Champion’s Queen and pawn.

The players still have four rounds to break the tie, while for the time being, the four players qualified for the 2018 Grand Chess Tour Final in London are Nakamura, Aronian, Maxime and Mamedyarov.

When play resumes for round 6, on Friday August 23 at 1pm (Saint-Louis time), Maxime will be black against Mamedyarov, the top player against whom he has the worst stats…

[otw_shortcode_quote border=”bordered” border_style=”bordered” background_pattern=”otw-pattern-1″]Saint LouisThe Saint-Louis Chess Club is proud to present itself as the anchor’s point of American chess resurgence. And the fact is, that under the leadership of local billionaire Rex Sinquefield, considerable resources have been invested to create a pleasant and appealing place in the heart of Saint-Louis. But also to attract the best players and the best youngsters, without forgetting the scholastic part, throughout the town’s schools.
There’s also a « Hall of Fame » inside the club, that honours the best players in History and which is open to visitors, as well as a variety of exhibitions on chess themes.
Saint-Louis, Missouri, « the Mecca of chess », the Americans say…[/otw_shortcode_quote]