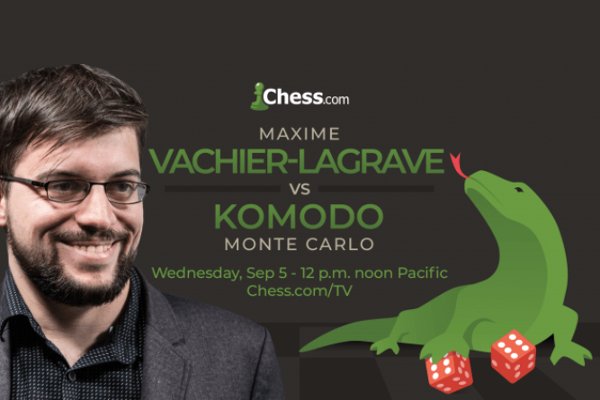 On Wednesday, September 5, I took up a new challenge, against Komodo Monte Carlo, which uses auto-learning methods similar to those of Alpha Zero. To make things more even, chess.com which was running this online event, had cooked the following program; five blitz games with white against levels 16-20 of Komodo, then six rapid odds games, against the premium Monte Carlo version.
The match was broadcast live and all along, I shared my thoughts with viewers…
Of course, I didn’t expect an easy evening! Even against odds, there’s always a margin to make mistakes. This is especially true against a machine, which for sure is going to offer huge resistance.

The five blitz games could easily be considered as warm ups against « classical » versions of Komodo. not running on the most powerful processors, except for level 20. Komodo being programmed to make instant moves at levels 16 to 19, I could take benefit of his unavoidable lack of depth in several games. I won the blitz match 4-1, losing a game in an overwhelming position, but ultimately winning an inferior one after a bug led Komodo to a loss on time!

In odds chess, it was not the same story! Komodo Monte Carlo, as he was programmed, would certainly display a stratospheric level, coupled with some kind of intelligence, for instance leading him to avoid exchanges.
I began the match by losing two games…

First I was too optimistic with white, a tempo up and f7 pawn missing; then I was unsuccessful in salvaging the Rook endgame, but it was really tricky.

In the second game, I knew the task would be arduous, even if my Queen was supposed to be stronger than his R+N; pratical difficulties here are huge.

As moreover, I made one bad decision after another, I logically went down…

I scored my first half-point in Game 3, but it was a disapointment anyway, as I thought I would be huge favourite to win, with white missing both his g2 and f2 pawns!

Komodo showed his very special resilience in this game, and never ceased to pose problems, until he reached the following ending;

After 39…g4? 40.Rc1!, Komodo won c7 and got enough counterplay to draw the game. I should have preferred 39…Bd7 to keep winning chances.

The fourth game is in my opinion the most impressive one, with Komodo missing the Ng1 for a mere f7 pawn.

Despite the material disadvantage, Komodo always found counterplay, often surprising as if it was coming out of nowhere, by the way ! I wanted to avoid repetitions to demonstrate the power of material, but I ended up making too many second-rate moves, which cost me dearly.

With only one draw and three losses in odds chess, I needed to recover in the last two games.

Being the exchange and a pawn up, I could force events very early.

White’s last move 4.g3? is not very accurate. After the good sequence 4…Bg4 5.Bg2 Qe6+! 6.Kf1 Bh3, the exchange of the white-squared Bishops helped me a lot. Despite a few scares that are unavoidable against the comp, I could continue my process of exchanging pieces, and converted without too much trouble.

And last but not least, the « Knightmare », with 7 Knights against Q+2R+2B, an insane position to play! I decided to fianchetto both my Bishops as quickly as possible, in order to limit the Knights access to the central squares.

Finally, I did rather well against the Knight’s infernal saraband, with an ultimate draw that is impossible to analyse!


The barrier erected by White’s Knights is impressive!
A nice picture to round off this funny match, that Komodo won 4-2…

[otw_shortcode_quote border=”bordered” border_style=”bordered” background_pattern=”otw-pattern-1″]The LizardIn the first version of the Mvl-Komodo match, organizers had planned much more blitz games, and only three odds games, as was done a few weeks earlier, when Komodo faced Nakamura for its first real challenge. But the usefulness of having a Top player fight against lower versions of Komodo was not obvious. Moreover, it would have been a pity to spoil the viewers of three further odds games, and especially of the devilish « Knightmare »![/otw_shortcode_quote]