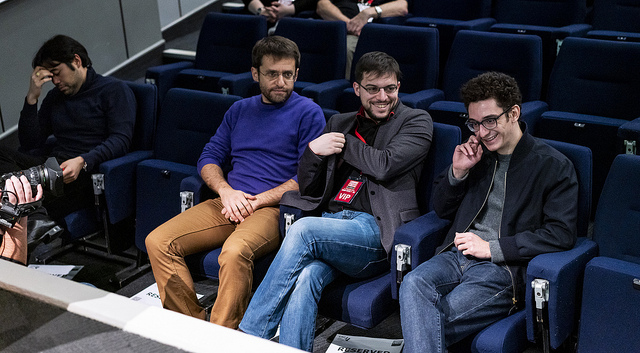 The 2018 Grand Chess Tour (GCT) Finals brought together the Top 4 finishers of the regular season, Nakamura, Aronian, Caruana and myself.

I arrived in London 48 hours before the beginning of the tournament, scheduled on December 11. Indeed, the traditional Pro Biz Challenge was taking place the day before, in Google headquarters. Each player was partnered with a businessman, both alternating moves. As usual, I teamed up with Gilles Betthaeuser and for the anecdote, we had a very reasonable result of one win, one draw and one loss, as we were paired with pretty good duos…

MVL-ARONIAN 18-10
I suffered in both Classical games. With white, I went for an erroneous plan right after the opening, 13.Nb3 followed by 14.d4. It was just a bad idea. Then, I was forced to play moves which didn’t look very natural, as 18.Ra2 in the following position:

I know this move had Kasparov screaming, as he was commentating the game live! But unfortunately, I already didn’t have much choice… I ultimately ended up in a naughty endgame, and during the game, in the following position, I was relieved to see 24…Rac8.

In the end, I could even play on an ending with Bishop and two connected pawns against Rook, but with minimum accuracy, black drew without much difficulty.

In the second game, I once again was inaccurate in the opening, in a well known variation of the English, for which Aronian had prepared the very rare 9.d4!?.

After 9…cxd4 10.Bxe6 Bxe6 11.Nxd4, I went into a deep think and took a radical decision, 11…Nc6. Of course, I was aware of the fact that 11…Bc4+, or even 11…Bd7, were probably better moves, but from a practical point of view, I felt that 11…Nc6 would be more cautious, and would allow me to keep things under control. Unfortunately, I couldn’t manage to put my Bishop on c5, in order to exchange black-coloured Bishops, and I had to do it via the manoeuver …Bb4-a5-b6, which is pretty slow. Therefore, Levon got enough time to direct his Knight towards c5.

In the first Rapid game, I suffered again, but for once without realizing it, until I understood, in the following position…

With all heavy pieces on the board, I had to tolerate a protected passed pawn on d6, in a higly difficult position to play. And we arrive at the computer’s winning line, utterly surreal, judge for yourselves!

I won the second Rapid game against the famous Berlin Wall, this Queenless middlegame full of nuances, in which the frontier between getting something and getting nothing at all, is very narrow.

With the 4-point lead given by this game, I could face the blitz portion with serenity, and I won it 3-1.

This qualification for the 2018 GCT Final against Nakamura (who had beaten Caruana) guaranteed my entry ticket for edition 2019, as well as the pleasure of leading the World Blitz rankings, ahead of Magnus Carlsen!

After a day off, the tournament was moved to the Olympia Theater. The final’s scenario was the reverse of the semi-final for me, as I was clearly dominant in the two Classical games.

In the first one, I was really surprised by his choice of variation against the Grunfeld. I knew that this position, not only didn’t give anything to white, but furthermore, could easily go wrong after an inaccuracy.

Here, I have been criticised for my choice of 33…f6 instead of 33…Rd1+ 34.Kf2 Rd2+ 35.Kg1 Ra2 36.Rxe5 a5. But during the game, I had the feeling white would get good drawing chances after 37.f4! a4 38.f5. However, carrying out this manoeuver without giving e5 was possible a few moves later, and I believe it’s probably there that my best chances laid.

In the second game, I again managed to get the advantage out of the Berlin endgame:

But Hikaru really defended well, particularly in this position with 31…g6! 32.hxg6 Rg8. Maybe I could have set more problems in this ending, but I don’t believe it would have been enough to change the final result (draw).

In the first Rapid game, still in a Berlin, I put the wrong Rook on d1.

I knew 14.Rad1, but I played the imprecise 14.Rfd1?!. There are so many nuances to remember in the openings! Therefore, I got absolutely nothing (draw, 33 moves).

In the second Rapid game, I had already analyzed this line of the English opening. I knew it was ok for black, including after his pawn sacrifice:

Even though the position remains highly unpleasant, I think I defended rather well. Realizing he was finding no decisive way through, and with the clock ticking, Hikaru started to make his usual funny faces, twice hesitating to repeat moves. He rightly ended up playing on, and while I remained in an awkward position, I spent all my time advantage to try to destabilize him with 47…a3!?.

The first three blitz games happened to be fairly balanced on the whole (three draws), with only one single moment when we both went wrong, in the first game:

Ultimately, after seven straigth draws at all rates of play, everything was decided in the very last blitz. Unfortunately, one can safely say that I went crazy in that game…

We coninued our theoretical debate on this specific English line, and Naka found the idea 13.Tc1. I knew the normal move was 13…e6, but I was unsure of myself, and I preferred 13…Qa5 14.Qb3 Nd7. Unfortunately, after 15.Bb4, I’m already slightly worse in case of 15…Qa4 16.Qxa4 Bxa4 17.Rc7. But my idea was 15…Qf5?, completely forgetting that after 16.Bd3 Qh5, white has 17.e4!, and my Queen is dangerously surrounded. Then, in practice, it was almost impossible to defend the position…

Beyond my disappointment of this missed game at the very end of the final, I’d rather remember my second place in the 2018 professionnal circuit, for the second time in a row, as well as my qualification for the next edition of Grand Chess Tour.

Next year will be a busy one, and perhaps even busier, depending on what FIDE prepares for its 2019 Grand-Prix. Meanwhile, the Grand Chess Tour spokesman has announced three new tournaments for next year, a Classical one in Croatia, as well as two Rapid ones in India and Ivory Coast. The idea of expanding the number of players in order to see new faces is a good one in my opinion; among Top players, there’s a kind of weariness from playing against each other throughout the year.

2018 is now over for me, as the announcement of the Rapid/Blitz World Championships in Saint-Petersbourg arrived much too late, when I had already planned a short week’s vacation between Christmas and New Year.

Merry Christmas to all, and I will be back in 2019 for new adventures across the board!

A few days before to leave for London, Maxime played in the monthly online Open tournament « Titled Tuesday » on www.chess.com. A far from easy blitz warm-up, as among the 353 players, you could find the likes of Nakamura, Wesley So, and lots of other Grandmasters. In the end, Maxime won the tournament alone with 9/10, finishing with two draws after a resounding 8/8 start, including a win against Nakamura! The tournament crosstable:
https://www.chess.com/tournament/live/-titled-tuesday-blitz-1016282