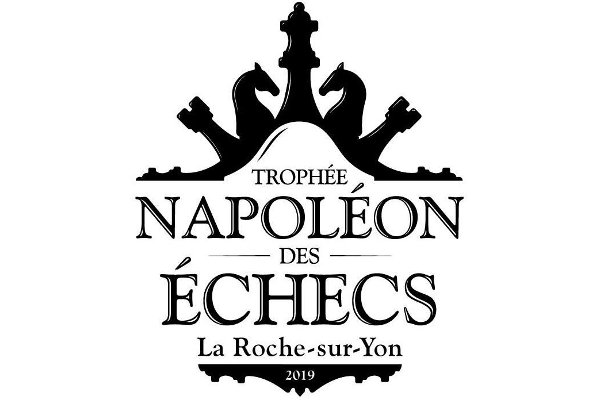 This famous Napoléon Bonaparte quote illustrates fairly well the chess event that took place February 16 in La Roche sur Yon. But what is the connection between Napoléon and the Vendée prefecture, you will probably ask?

It turns out that, by decree of 1804, May 25, the one who would become Emperor a few months later, ordered the foundation of a new administrative and military town, in the center of Vendée. La Roche sur Yon is hence a « Napoleonian town », which regularly honours its founder.

This year, to celebrate the 250th anniversary of Napoléon’s birth, the city decided to create a chess event, as the Emperor was a player himself. So, off for a blitz match between the promising Dutch youngster Jorden Van Foreest and myself! And as « imagination rules the world », the organizers had invented a fairly original format; seven games, of which two were Classical, two were Chess 960, two were thematic, and a further blindfold game to top it off!

A well thought out organization put the event on high level standards, for the players as well as for the audience A 300-seat auditorium almost filled up for a chess show, in an average town like La Roche sur Yon, means a clear success and is always a pleasure for the players.

As for the match itself, Jorden proved he was a worthwhile opponent. I was in danger as early as game 1, which I lost with white.

Fortunately, I was able to move up a gear in the second classical game, then in the two 960 games, hence recording three wins in a row.

Here is a nice tactical shot in the latest one:

Returning to the diagrammed position, the only move after 23…Qb3! was 24.Bf3! and everything holds!

The thematic games could offer nothing else than a « Napoléon Opening »!

Unimpressed by the imperial second white move, we both won fairly easily with black!

Then came the time for the blindfold game, with a little more time (15/10). We’re not used anymore to this type of play! Unfortunate though, as in spite of its ultra intense side – or perhaps thanks to it – blindfold chess is really interesting, as it requires an higher and unusual level of concentration. I know some players consider it is too demanding…

At the beginning of the game, we played the opening too quickly for the broadcast. But the IM duo Mullon/Mensch repaired the damage at lightning speed, discovering on the way that I had discarded my beloved Najdorf for the benefit of the Dragon. A choice which turned out to be no great success, although I was able to earn the half-point at the end, allowing me to win the match by a two-point margin, 4.5-2.5.

The afternoon concluded with the giant 100-board simultaneous display. We were four to face the players, Jorden and myself being joined by the commentators, IM Jean-Baptiste Mullon and FM Yannick Berthelot.

In other words, each of us was back to a certain game four moves later, which means we usually had to think from scratch!

Of course, there were a few hiccups, Jorden and I being a bit quicker than our comrades . Therefore, it happened sometimes that we overtook one of them, creating traffic jams around a few boards in the process. With the result that some players had very little time to think, while others had way too much of it…

Thus, in the general good mood around, a few pieces were left en prise, and a few games were lost by us!

The Trophée Napoléon in La Roche sur Yon has been a real success, and it might happen again next year. The organization team has set really high standards for a first, well supported by motivated city officials, and it definitely deserves to have another shot.

I take this opportunity to remind the readers that on my channel www.twitch.tv/mvlchess, I’m regularly streaming live events in which I’m playing on www.chess.com, like the Pro Chess League, Titled Tuesday, or other stuff… Sometimes, I content myself with the live streaming of casual games against strong (even super strong ) players, or with the solving of tactical exercises in limited time! Often in english, sometimes in french, I share my views and insights while playing, and I also answer lots of questions live…

Mi and l’Au is the name of a french-finnish band whose members are Laurent Leclère and Mira Romantchouk. The band is recognized among folk and ethereal music fans and has already released a few albums. The chess loving couple lives in Finland, and they wrote to us in order to share some of their melodies. Very special feature of these songs, they have been written by a lake near their house, while watching a lot of Maxime’s games! Gosh, for sure you don’t see that everyday!
Here is a piece of this music, so remarkable in its making.