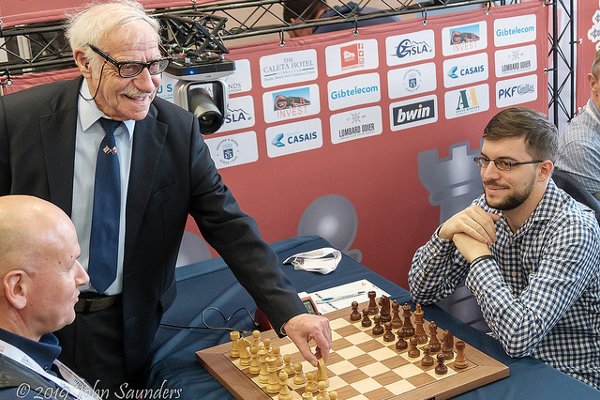 First tournament of the year, Gibraltar is now the routine destination for me. I love the atmosphere there, with all the other french players, more than 10 of them this year. The numerous friendly evenings are also part of the fun: team blitz, tarot, mini table tennis, « Battle of the sexes » on a giant board, etc.

Despite the loss of my passport, I arrived on the Rock 48 hours before the beginning of the tournament, determined to enjoy my stay, but also to begin the sporting year on a positive note, in the always difficult context of a strong Open.

I started against an experienced Estonian IM with black. I got an edge quite early on, but I made my life complicated before the time control. The position was no doubt still winning, but it it’s a real technical task ahead. As I was not really up to it, 17 moves later, we reached the following, critical position:

Had Kiik just done nothing, I would probably have had to go through the …g5-g4 break, which would inevitably generate counterplay for white.

Here, I intended to play the natural 19.Be3 Qd3 20.Qa2! (but not 20.Qe1? Nxb3! 21.Rxb3 Qxc4), and the threat 21.Bf1 seems to be giving the advantage, as Black’s Queen is trapped. But I realized that black could then sacrifice the Queen with 20…Fxc3 21.Rd1 Qxe3!, and although he has merely Bishop and Knight to compensate it, the lack of access to black’s position would have prevented me to progress in any way. Therefore, I chose the slightly superior endgame after 19.Nd5 Bxd5 20.exd5 Qd3 21.Bf1 Qxe2 22.Bxe2. Then I won a pawn, but at the cost of a transposition into a Rook + opposite-coloured Bishops ending almost impossible to win.

A not so simple game – far from it ! – against an unknown Nigerian player who, all the same, had beaten two GMs in the first two rounds ! Moreover, he played very correctly in the opening, and I was literally stunned when I saw him unleash 16…Nc2 a tempo in the following position!jouant 16…Cc2 a tempo !

Against my Najdorf, the Italian GM chose a rare line in the 6.Bc4 variation, which I didn’t really understand; 6…e6 7.Bb3 Nbd7 8.0-0 Nc5 9.Qe1!?. After the game, he explained the idea, but it remains a bit over-ornate to my eyes. I got a pleasant middlegame position to play, but I made an inaccuracy on move 16:

Here, I castled a bit too mechanically, allowing the manoeuver Nd1-e3.

Undoubtedly, I felt off balance at the beginning of the tournament, my brain just wasn’t working efficiently.

A key moment in the tournament, against the reigning Women’s World Champion…

… I didn’t know this sub-variation 5…dxc4. Therefore, after 6.Bxc4 c5, I took the decision to be upfront and straightforward with 7.g4!?, after a rather rare – by my standards – 23-minute think. I also took into consideration the fact that a normal plan with d4, or even a d3/Cbd2, would leave her in her comfort zone. So I was going to take her out of it by force! Both of us got a bit lost in the complicated tactical lines arising after 7…0-0 8.g5 Nd5 9.Nc3 a6.

A relatively quiet draw against the eventual tournament’s winner. The funny thing is that Artemiev was shocked to see me across the board. Leading the field with Navara, he assumed the pairing was obvious and didn’t check it. He just forgot that in Gibraltar, you are offered the option of taking byes, which Navara did for this round!

We discussed a Symetrical English variation that I had prepared the previous day with black for Artemiev, and before round 2 with white for Puranik, though it didn’t occur in any of these games! This line leads to types of positions that probably don’t give white an edge, but are quite difficult to play

I was expecting the normal move 13…Be6 (13…Bh3 is also possible), but the 2017 World Junior Champion played 13…h6?!, underestimating the dangers looming after 14.Nd5 Nxd5 15.cxd5 Ne7 16.Nf2!. His position quickly turned into some sort of terrible Benoni, without any normal counterplay on the Queenside, until the decisive central breakthrough:

The Vietnamese chose an old line against the Grünfeld, which I often played with both colours.

A typical game where the opening prep works perfectly!

My trainer Etienne Bacrot had discovered the new idea 19.dxc6 Nxc6 20.c4 during the prep of a game against Aronian. Our analyses were covering the line chosen by Alekseenko up to 25.Qg4.

Here, my opponent, who had already spent almost 1 hour just to counter my novelty, didn’t find the critical 25…Nc2!. I knew that 25.Nxf7 Nxe1 (25…Kxf7? 26.Qe6+) 26.Qe6 was leading to a draw if black could find the only move 26…Qb8!, and white has nothing better than the perpetual. In this case, I would have chosen 25.Rc1!?, and even if there’s no objective advantage for white after 25…Qb2, I would still have had good reasons to keep the game going with 26.Qf5, or even 26.Nxf7, especially against an opponent whose ticking clock showed only 15 minutes remaining!

Obviously, I will not hide the fact that my tournament fizzled out badly, with a last-round loss against a much lower rated opponent. Yet this decisive game for the fate of the tournament had begun with the best possible prospects…

Having countered the 6.Be3 variation against the Najdorf with 6…Ng4 and not 6…e5, I was surprised to see the young Indian taking a lot of time for the following moves, although I already played numerous games with both of those replies! After the game, he made it clear that he had only prepared 6…e5. So, he was clearly struggling in the opening, went into a rare and objectively doubtful line (12.Nf3?!), and I quickly got an edge with black, after a series of normal developing moves.

The simple 16…Bxc3 would have kept a clear edge. But I had already planned to play 16…Rg8?, which I did very quickly, before realizing that I was just allowing white to solve all his problems with 17.Nd5! Qxd2 18.Rxd2.

In order not to just have hopes of a draw, I avoided the « normal »

18…Bxd5 19.exd5, and decided to complicate matters with 18…Bh6 19.Rdd1 f6, but it turned against me. And when you take such a bad decision as 16…Tg8?, you enter a downward spiral, a mistake usually calling for other mistakes to be made. Afterwards, I tried hard to set up nice tactical traps, but my opponent very cleverly navigated through them, and didn’t let me any realistic chance of salvation whatsoever.

A game to be forgotten, but also a few lessons to be drawn from it for the future…

Talking about the future, I now know that I won’t play any official tournament before late April or early May, after which the schedule will be fully packed throughout the remaining months of 2019.

So I have three months ahead of me to work on the adjustment of all the settings!

A few days after Gibraltar, Maxime played in the monthly blitz tournament on www.chess.com, the « Titled Tuesday », which always gathers an impressive number of strong GMs. While streaming his games live on the channel www.twitch.tv/mvlchess, he finished at a reasonable 8/10. Not enough though to challenge Grischuk, who was on fire; the Russian won 9 straight games, before to settle for a quick last-round draw!