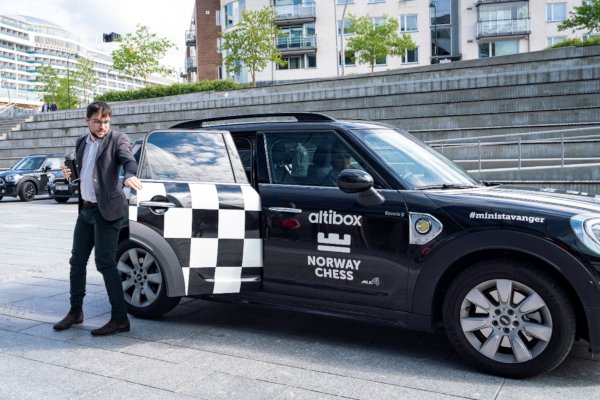 I always loved the Norway Chess atmosphere. So I was delighted to be once again invited to spend two weeks in Stavanger. As usual, the tournament itself was preceded by a blitz showdown, aimed at determining the number of whites and blacks.

This year, the challenge was double for me, as I knew that ending up ahead of Carlsen would mean I’d rob him of the World #1 spot in the Blitz rankings! Though not an end in itself, it remains a pleasant feeling, doesn’t it? 🙂

And at the end of the day, I played rather well and won the Blitz tournament, 1.5 point ahead of the duo Aronian / Carlsen!

Here are two nice positions from this Blitz tournament:

Thanks to this very good performance, I actually took the leadership in the Blitz rankings, whose Top 10 nows looks like this…

This year, I was also very curious about the new format cooked by the organizers. First of all, a rather quick classical rhythm, 2 hours for the whole game, with only 10 seconds a move increment after move 40. And then, the main novelty in case of a draw, an Armageddon tiebreaker; 10 minutes for white, 7 for black, white must win. This format was chosen by Norwegian TV, as they wanted to control better the duration of play. This is the reason why the games began later. It’s true that a start at 5pm is no big deal in itself, but the issue is that you don’t have much time left to relax in the evening. Certainly, you have time in the morning, but it is not the ideal moment for decompression. 🙂

About the Armageddon itself, which has been commented a lot, it is true that we all had trouble adapting ourselves; for instance, I completely mismanaged my first Armageddon game against Yu Yangyi… But on the whole, I believe the format is quite balanced, and I don’t think it is favourable to one colour or the other. However, the scoring system needs to be reassessed, because it gives too much weight to the Armageddon. Ding Liren ending up 6th with +2 in the classical games, this is not fair! I would advise a 4 – 2 – 1 – 0 instead of 2 – 1.5 – 0.5 – 0.

Before to deal with the games, let me briefly present my second important victory, after the one in the Blitz tournament… The organizers had planned a cooking challenge during the first rest day. Teamed up with Anand, I was relieved – the other pairs probably also were! – to be helped by a Chef, and quite happy to win the contest in the end! This was a nice experience, which enabled us to see from inside the making of a gastronomic meal… For the anecdote, we cooked a « salmon filet with buttered fennel and its vegetables ».

In the Classical tournament, I had 8 draws and 1 loss, and above all, I’m not satisfied with the overall level of my play. I must confess that having to wait for Round 7 Armageddon before to actually win a game on the board, irked me a bit. 🙂

I’ll have a word on all 9 games of mine, beginning with the white ones (5 draws). One indisputable fact is that I didn’t get much with white, except on round 1 with Yu Yangyi, where I was clearly better.

Against Anand, I chose a sub-variation to counter the Möller Defense, and the ex-World Champion reacted incorrectly with 12…Nxe4? in the following position (instead of 12…0-0):

Facing Carlsen’s Svechnikov, once again I couldn’t recall all my analyses even though this time, I had looked at the whole variation that very morning! At the critical moment, I remembered a pattern which reminded me of one of the lines I had gone through; and it was « almost » it, but not quite « exactly » it! It must be said that in a variation like this one, there are really lots of stuff to analyze! Then you come back to your room in the evening, you go through your files, and when you see the good moves that are just there, you say to yourself: « Damn it, how come I didn’t recall that detail? ».

Against Grischuk, it was still worse, as I happened to be grossly misled in the move order of the Rossolimo! With 5.h3 instead of 5.d3, I was just playing a harmless variation. Though unimpressive, I ended up slightly better after black suffered a blackout in the following position:

After 16…b4?!, Grischuk had just forgotten that 17.Bxb4 was possible! Off form, the Russian will do worse later on, putting a Bishop directly en prise in the opening against Caruana…

That being said, he defended very precisely after his mistake, and I proved unable to increase the advantage.

I also misplayed the opening against Ding Liren, this time because it was a line I hadn’t seen for a while, and I couldn’t remember all relevant details.

About the one against Caruana, I suggest you watch the detailed analysis, which was recorded during a recent stream on my Twitch channel www.twitch.tv/mvlchess.

Against Aronian, I do have a few regrets, as I managed to get an advantageous position with black, after a very original English opening from both sides.

Here is the critical position:

I offered the exchange of Queens by 23…Qg5?, and it was not a good idea. With his pawn center and pieces able to come together towards my King, I felt unsure and got a bit scared. I thought that without Queens on the board, I might be able to attack his then vulnerable center pawns. And that’s what happened indeed, but only because Levon helped! Unfortunately, I missed the target again a few moves later, because of a miscalculation…

Mamedyarov tried absolutely nothing against me; he didn’t look in his best shape that day… Against So in the last round, I got a very nice position from the English Opening once again. But I was unable to increase the edge, mostly because of a flawless defense by the American.

I won four and lost four of the eight Armageddon new look I had to play; here are two interesting positions from theses games.

I still have to congratulate World Champion Magnus Carlsen for his seventh win in a row among the Elite circuit! There are numbers that speak for themselves…

Most of all will meet very soon in Zagreb (Croatia), for the second leg of the Grand Chess Tour, June 26-July 8. From there, I will fly directly to Riga (Latvia), where the FIDE Grand Prix will begin for me, from July 12 onwards.

Ok, it’s only blitz! But winning three games in a row against World Champion Magnus Carlsen, while he dominates the World Elite like never before… It for sure is a very impressive accomplishment from Maxime, which deserved a replay.
Here is the footage of the third win in Norway, with the kind permission from Norway Chess organizers, not at all resentful of their champion’s defeat! 🙂