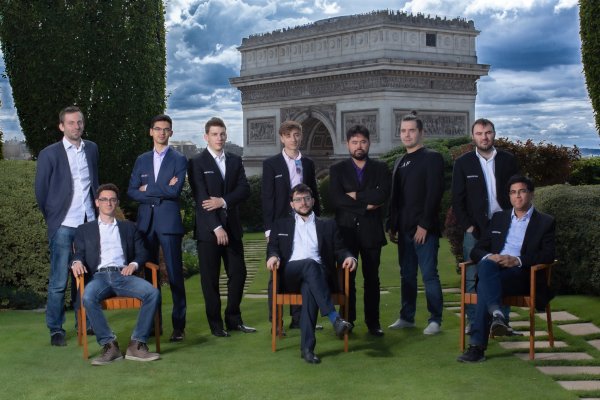 I just finished a few days ago a 6-week marathon. Indeed, I left home on June 24 and flew to Zagreb, Croatia, in order to play the first Classical tournament of the Grand Chess Tour (GCT). On July 9, I flew directly from Zagreb to Riga, Latvia, where I began my Grand Prix FIDE campaign. Then I came back to Paris for the second GCT Rapid & Blitz, and only went back home on August 2!

I’m tired, that’s for sure… Though I knew this year’s calendar would set a breathtaking pace. But I couldn’t get the level of physical preparation required beforehand, which would maybe have allowed me to stay fit during the whole period.

Fortunately, I arrived in Zagreb in quite good shape, but paradoxically, my chess was bad throughout in Croatia. Certainly, the playing conditions didn’t help. The air conditioning – a past-time one – was in full swing on the scene, causing annoying noise. Frankly speaking, it was a real issue for me, especially as other organization details were also suboptimal. It(s a pity though, as Zagreb is an enjoyable town and I very much liked its ambiance, restaurants… the town, the organization…

Then, around half-tournament, I more or less gave up, and decided to save energy. I benefited from these few days, as well as those from the transit to Riga, to forget this unfortunate chess moment in Croatia, and recover energy.

In Latvia, I must admit everything went really smoothly. I was pretty surprised to avoid all tie-breaks before the final, and also that for once, I could benefit from such favourable circumstances!

In the ¼ finals against Topalov, the first game was indeed double-edged, but it worked out very well in the end. However, it was still far from perfect as, like I did against Navara, I happened to miscalculate a critical variation…

Strangely enough, I played my best game during the ½ final return match against Grischuk, even though I had a minor health concern, and felt really without energy. I quickly offered a draw, but he declined, and I was able to gather my last resources in order to ultimately win that game. Being qualified for the Riga final without tie-break meant that I would have two free full days ahead of me, which I fully used to rest and relax.

So I could approach the match against Mamedyarov in better shape, but it was so full of twists that I’m not yet able to analyze it clearly.

Of course, it’s a pity I ended up losing the match because of a final Armageddon game, but I’d rather remember that Riga was a prolific tournament in terms of result, as I gathered 8 points, thanks to the 3 bonus points I earned from winning my first three matches without tie-breaks.

Admittedly, a win would have given me 11 points instead of 8. Even if I wouldn’t have booked my ticket for the Candidates yet, I think in this case my qualification chances would have raised to 95%. With 8 points, I rate my chances in the Grand Prix around 50-60%. Of course, I will have to arrive fresh in Hamburg and Tel-Aviv, as I’m well aware of the fact that nobody’s immune against a first round elimination and a big zero! (Giri and Aronian have both scored 0 in the first two tournaments…).

But in my mind, if I reach one final or two semi-finals, I will be qualified; and maybe even less, with one or two bonus points gleaned here or there…

Then, we must also take into account the possibility to qualify from the World Cup, which raises probabilities. 🙂

Thus, I only came back from Riga on July 25, and as soon as the next day, Paris GCT Rapid & Blitz was beginning, with an afternoon devoted to press and technical meetings. The chain of events was beginning to weigh heavily…

The first day of Rapid games, I played badly and was very lucky, mainly against Dubov in the first round. The second day was by far the most accomplished one, with a very nice win against Caruana in particular.

Being in pole-position, I played the third day smooth sailing; two quick draws with white against Nakamura and Anand, having on the way mixed up my prep in the Indian’s pet Open Spanish. As Duda also gave me an easy win with black, I ended up the Rapid part with 6.5/9, an almost perfect result. I thought I would be able to finish off the job quite early in the Blitz. I didn’t see what could happen and then… there was this game against Grischuk!

I found myself in a completely winning position, moreover with 3 minutes on the clock vs my opponent’s 10 seconds! I wanted to apply myself not to spoil the win. I began beating around the bush, lost time, and in the following position…

A few moves later, not only my advantage had already melt like snow in the sun, but also I overlooked the threat Bg8+! again with the move 41…Bf4??.
This time, Sacha didn’t miss the chance… (1-0, 49 moves). Paradoxically, I’m sure I would have won this game, had I got 20 seconds on my clock instead of 3 minutes!
Very hard to swallow, and even if I bounced back immediately against Caruana, I followed up with a couple of erratic games. Not the one against Nakamura, fairly won by him, but both my losses against Giri and Duda that day come to my mind.

In short, after a shaky first Blitz day with 4.5/9, I was somehow still leading, and I thought I would be able to turn the situation around on the last day.
How wrong I was, as it went from bad to worse! I crossed that day like a zombie, I couldn’t calculate a single variation properly. I found it out during my third round game against Caruana…

Here, I wanted to play the normal 31…Qa8, and the game goes on. But on second thoughts, I wondered; what is the issue with 31…Fc7? Fabiano replied 32.Qc2! and I understood I had a real problem, but too late!

Another example of my shape at the end of Paris tournament; in this equal position, Duda blundered with 24.Nfe5??. And I didn’t play the refutation 24…b5! because after 25.Bxb7, I completely overlooked 25…bxc4 and white loses a piece! No comment… (1-0, 56 moves).

I don’t think I ever played so badly in a Blitz tournament, and with this 8/18 result, it is a miracle I could retain my lead in the combined rankings and win the tournament. Results on the other boards all turned out in my favour in the last rounds!

Talking about figures, it was a very good result though, and I guess I’m well on my way to finish on one of the four qualifying spots for the Finals, scheduled in London early December.

Next step for me, Grand Chess Tour again, with the Saint-Louis Rapid & Blitz (USA), which begins on August 10, immediately followed by the Sinquefield Cup.

Maxime took the decision a few weeks ago to skip the brand new “Grand Swiss” tournament cooked up by FIDE, which will take place on the Isle of Man in October. Although offering a Candidates spot to the winner, Maxime regarded such a tournament as too difficult and too random to devote two weeks to it – without counting preparation.
Assessing his chances of him winnning the tournament at a mere 5%, he decided to skip it and to devote his October time to the preparation of the decisive FIDE Grand Prix tournaments in Hamburg (November) and Tel-Aviv (December).
Sometimes, decisions have to be taken!