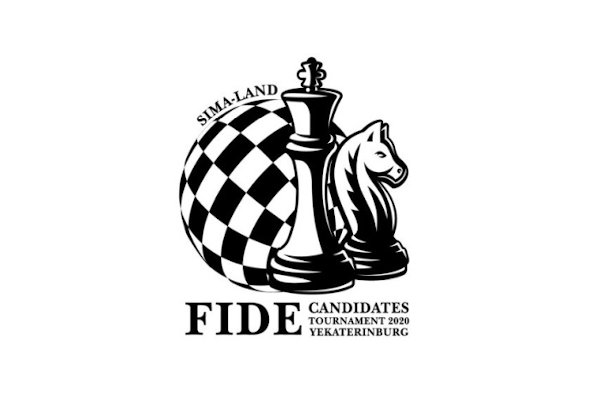 After more than a year of interruption, the Candidates’ Tournament finally resumed on 19 April, right where it was interrupted, in Yekaterinburg (Russia). You can read my report of the first half.
Here is a quick review of the critical moments in each of my 7 games:

Later in the game, when I had almost equalised, I started to make inaccuracies. In fact, I think I took six bad decisions in the first four games, which is really too costly at this level.

The second key position of the game is of course this endgame where I have the wrong fortress.

The one with the Knight on h6, which I chose, would have held with the white’s pawn on g3 instead of g2; but the fact that there is an additional possibility of Rg3+, breaking the harmony of the fortress, changes everything: a nuance really not easy to detect! The real fortress was therefore to position the knight on g7, controlling access to the white squares. At the end, a defeat difficult to accept considering the course of the game…

I think I got a very reasonable position against his anti-Grünfeld with 3.h4, but I made a serious mistake on the way out of the opening, which allowed him to make an excellent piece sacrifice. I had anticipated it though, but unfortunately underestimated its strength.

In my opinion, the critical moment of this game was when I decided to take a pawn by 21.Qxb5? after which I thought I had a clear advantage. In reality, I had lost a good part of this advantage by playing that move, and in retrospect, I understand that I should have opted for 21.Fc2!. The problem is that during the game I thought that 21…b4 would stabilise his good knight on c5, forgetting the 22.f3! manœuvre, followed by Ff2, and I think black will suffer as the position still is quite poisonous. Again, I should have seen this and made the right choice…

Although excessively complex, the position started to go wrong for me after 19.g5.

After a nice tactical shot which saved me, we landed in the following position:

Objectively, trying to play for the win with 33…Qd5 was perhaps an error of judgement, but for me the situation in the tournament demanded that I take that risk. Unfortunately after 36.Bxe5, I immediately blundered with the terrible 36…Rxg5? (36…b5! was probably enough to keep the balance) 37.Qxb7, forgetting that the Bishop is immune because of the double check on g2 and h2 winning the Rook. Obviously, the loss of the b7-pawn changes everything and I collapsed afterwards…

In this game, the young Russian handled the opening badly, and I soon got a very large advantage. On the other hand, he defended himself really well afterwards, even though I was probably not technically clinical since he still had good chances of a draw in the following critical position:

Instead, Alekseenko chose to wait with 30…Rd7? but after 31.Rd1 Rxd1 (31…Rb7 is no longer possible because of 32.Rd5 b3 33.a3 Rc7 and Black doesn’t get counterplay on f4 anymore) 32.Rxd1, I had calculated the Bishops’ endgame down to the final position. Obviously, there are quite a few subtleties to take into consideration, but I told myself that I had to believe in my calculations and… too bad for me if I was wrong 🙂 . I needed that confidence for the end of the tournament!

It was obviously an atypical game, since I had to win with black, and thus create a position full of tension, even if I knew that it might turn against me. But given the tournament’s situation, given his blatant state of nervousness, and the evidence that he was playing to avoid any risks, I had to try everything. It’s typical of the ambiguity of playing for a draw with White: of course, it takes away a lot of possibilities for the opponent to get a normal fighting game, but on the other hand, you don’t play at 100% of your capacities anymore, and it could have played tricks on him.

After going through a very critical phase, I got the following playable position:

Black is down a pawn, but has reasonable compensations with control of the black squares and of access along the b-file. Unfortunately, during the game I couldn’t figure out how to improve my pieces position at all, so I resolved to swap all the heavy pieces with 28…Rab8? 29.Rxb8 Rxb8 30.Rxb8 Qxb8 31.Qb2 Qxb2 32.Nxb2 with an even ending. If I had seen this move, I would obviously have played 28…Cf7! with the idea of regrouping with …d6 and …Bc8. Not that this continuation would have given Black an advantage, but I could have just continued a complex struggle with many pieces on the board, and God knows what might have happened then?

Obviously, this is a small regret, even though I definitely can say that this is not the game where I lost the Candidates.

A final game to play for second place in the Candidates was no mean feat, even if the major prospect of a world championship match had vanished.

Here I knew that Black’s best chance was to transpose into the four-rook endgame by 20…Nxd6 21.exd6 Kd7 22.Rf3 Rhf8 23.Re1 f6!. Wang Hao preferred 20…Rhd8? but after 21.Re1! white has consolidated his knight on d6 supported by the pawn on e5, and has the advantage. For what will turn out to be his last professional game, the Chinese put up little resistance and quickly gave up.

Congratulations to Ian Nepomniachtchi on his final victory, and good luck to him in the World Championship match against Carlsen, which starts on 26 November in Dubai, United Arab Emirates.

As for me, I obviously can’t be fully satisfied with this second place, when only the first one matters. I have already started to debrief in detail with my team on what went well and what didn’t; it is too early to draw conclusions…

It is now time to get back into the swing of things, with the tournaments starting up again, especially those of the Grand Chess Tour, and the highlight of the World Cup in Sochi (Russia) in July, a qualifier for the next Candidates Tournament, which could well be held in the spring of 2022, if FIDE is to be believed.

In the meantime, and as a warm up, I will play the next Champions Chess Tour online tournament, which will start on Sunday 23 May.

Unlike the first half of the tournament, Maxime did not go alone to Yekaterinburg: International Grandmaster (and World Tennis-Chess Champion 🙂 ) Sébastien Mazé accompanied him.
Besides chess, Sébastien also played the role of sports coach! You can see them below, during a session in the hotel’s gym…