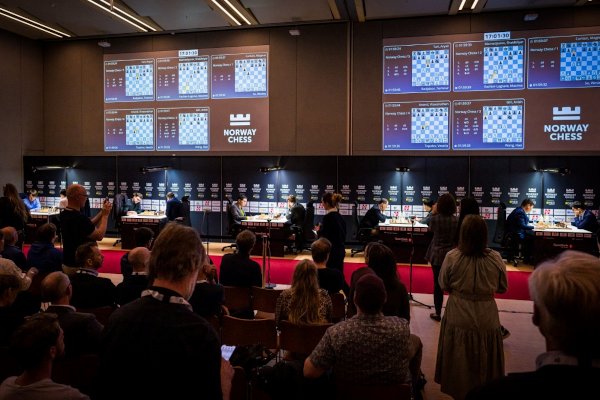 Here I am again after a sequence of Norway Chess, the French Team Championships in Chartres, a 48h trip to Madrid for the public launch of the Immortal Game platform of which I am the ambassador, and finally the semi-finals and final of the French Cup in Paris!

Considering my busy schedule these days, I will come back rather quickly on these competitions… I arrived in Norway on May 29th, in the city of Stavanger that I am starting to know well. It’s a familiar place where I have my little habits and to tell the truth, it’s rather an advantage; especially in a healthy environment, where you can walk around and breathe the fresh air! Compared to other cities, it’s a huge plus. After that, there is not so much to do in Stavanger, but the whole context is quite relaxing. In addition to the walks and the chess preparation itself, I must admit that I always had an eye on the Roland Garros tournament! I was able to follow a lot of the big matches, but not the semis or the final, which were taking place at the same time as my games.

As for the format, Norway Chess has taken up the one that had been experimented for the first time in 2019, with games of 2 hours without increment, and an Armaggedon in case of a draw.

The day before the first round, a blitz tournament was organized, with the objective of giving the first 5 players the privilege of having 5 whites.

I did something that had never happened to me in my life and that is a bit disturbing for a reigning world champion… losing my first 5 blitz in a row!

Fortunately, there was a short 10-minute break that allowed me to recover my spirits and thus finish in a blaze of glory, but the 4 wins were not enough to compensate for the 5 losses!

On to the main tournament:

Here, influenced by the fact that the other options seemed a bit passive, I decided to be ambitious with the pawn sacrifice 17…b5?. Unfortunately, this choice turned out to be a bad decision, made at the wrong time! I just forgot that after 18.cxb5 Nxd4 19.Bxd4 Bxd4+ 20.Rxd4 axb5, white did not play 21.Qxb5 Ne5! which leaves a lot of counterplay, but the very strong 21.Qd2!, and black is clearly worse. I must also say that Vishy played a flawless game and converted very convincingly.

An uneventful draw followed by a chaotic win in the Armaggedon…

Another Sicilian with 3.Bb5+, in which he placed a rather successful prep. But at the end of the opening I managed to turn things around, especially from the following position:

He did not anticipate 13…Nc7! and did not even really think about accepting the sacrifice and taking on d6: 14.Nxd6 Ne6 would indeed have complicated the position 🙂 . He preferred to play the energy-saving 14.g4 Ne6 15.g5 Be7, which was not uninteresting, but on condition to continue with 16.Nxe7+ Qxe7 17.f5, because I would certainly not have played 17…Nxg5 18.Qg3 which seemed too risky for my King, but rather 18…Nd4 with a complicated position. In the game, he opted for the inferior continuation 16.fxe5?! Qxe5 17.Nxe7+ Qxe7 18.Qg3. And bad luck for him, this position is not only a bit unpleasant for white, as one might think at first glance, but almost lost after the excellent 18…f6!.I think I converted clinically after 19.gxf6 Rxf6 20.Rxf6 Qxf6 21.Ne2 Rf8 22.Bd2 Nf4 23.Nxf4 exf4 and the forward march of the f-pawn, combined with the vulnerability of white’s King, is decisive.

After having held a long theoretical line of the Grünfeld, which is not very dangerous if Black is accurate, I crumbled in the Armaggedon, for lack of having all the adequate reflexes in the Queen’s Gambit Accepted that I integrated into my repertoire some time ago.

Not a great success with white as I clearly got tangled up in the opening. Fortunately, I solved my problems quite well and managed to hold the position. And in the Armaggedon, Veselin was kind enough to forget a little combination losing a pawn at the end of the opening!

A quick and easy draw with black, followed by an Armaggedon where I clearly dominated.

In a normal position, Wesley played 18…Ne4? here, a move that loses two tempi after 19.f3 Nd6 (19…b5 20.fxe4 bxa4 21.Qc4 is really not nice either) 20.Nc5 Qc8 21.Bf4, and that’s more than Black’s position can tolerate in practical terms. I didn’t understand his choice at all, especially since this is precisely the kind of thing that never happens to him!

Clearly the highlight and key moment of the tournament for me. The world champion came with a specific idea against my Grunfeld. Probably one of those that had been prepared for his world championship match; well, it was probably one idea among others that he decided to use against me that day. But I think he misjudged the position at the end of the opening phase. I found myself immediately slightly better, and on top of that, he spent quite a bit of time in a somewhat bizarre way. I was surprised by his poor time management because usually that’s one of his great strengths: to be able to stop at important moments and play quickly when there’s not much to decide.

As a result, especially without an increment, he found himself with very little time and a really difficult position to defend. Hence this error that should have been decisive on the 40th move, based on a miscalculation.

A few moves later, we reached the following position:

Here, Black wins, but it requires millimetric precision. Before playing 47…g5, I had anticipated his counterattack on f5, but via h7, preventing the option of …Kg6. So when he played 48.Be6, for me 48…Kg6? was the natural reaction, since I had already calculated that 48…gxh4 49.Bxf5 h3+ 50.Bxh3 Rg3+ 51.Kh2 was not enough because no discovery worked, the Rd7 being protected; if I had spent a little more time here – and this is my great regret – I would have found the study-like move 51…Bb8!, and White is in total zugzwang; any Rook move would leave the piece en prise through a discovered check, and the same for any Bishop move. Not so difficult actually!

So the position was a draw, but Magnus misplayed it again later. Unfortunately, I missed my chance again, but frankly this second missed win was much harder than the first one!

I still think it was a good game on my part, but with a little taste of unfinished business…

Armageddon was a little crazy. During the 20-minute break, I decided to play the exact same line if he repeated, which I thought was unlikely but he did it anyway! It’s impossible to describe all the ups and downs of this tumultuous game, but let’s just say that I managed to find the right moves and have a better position. But obviously, it cost me time on some decisions. And just when I thought I had done the hardest, I found myself with a trapped Knight. With only one second of increment generously allotted after the 40th move, it was panic on board and I cracked!

I still had a theoretical chance to compete for the first place before this last round, but it would have required a rather improbable alignment of the planets. Anyway, Giri quickly took away all hope with his very surprising idea on the 5th move of the Rossolimo!

About ten moves are already known here, but not 5…h6!?. Incomprehensible at first sight, this move is in fact not so ridiculous and I will spare you the complicated attempts of explanation 🙂 .

I then won the last Armaggedon to finish at an honorable 4th place.

When I came back from Norway, I barely had time to unpack my bags before I left for Chartres, to join my Asnières team which was playing in the Top 16 (French team championship).

I was happy to be back with my teammates and to play for the Championship win in the last 6 rounds. Unfortunately, it didn’t go as planned… Even though the suspense remained until the end because we had to beat Bischwiller in the last round to take the title from them, and had to finally settle for a draw on the wire 4-4.

With 3 draws and 1 win, I’m not particularly proud of my own performance, but I still remember the nice combination I had the opportunity to play against Tiviakov in the Asnières-Chartres game:

Organized in the premises of the Boston Consulting Group in Paris, the last two stages of the French Cup were very close: first a 2-2 draw against Châlons, but with a predominant victory on the second board of Alekseenko. I drew with black against Grandelius (2645).

In the final, on the other hand, for what was the same poster as the last edition played in 2019, we disposed of Tremblay-en-France 3-1, despite my draw with white against Malakhov (2652).

So Asnières keeps the Cup one more year!

Maxime’s games at the French cup:

At the initiative of Apollo Magazine, Maxime went to meet Mathieu Bodmer, 20 years of professional soccer career behind him. The Normandy native has travelled the stadiums of France and Europe, playing for SM Caen, Lille, PSG and Olympique Lyonnais, before hanging up his boots during the pandemic.

Apollo hosts a column Vice Versa, which aims to allow two personalities, fan of the field of activity of the other, to meet but especially to exchange. We know Maxime’s interest for sports in general and soccer in particular, while Bodmer, appointed Sports Director of Le Havre a few days after the publication of the video, is fond of mathematics and chess.