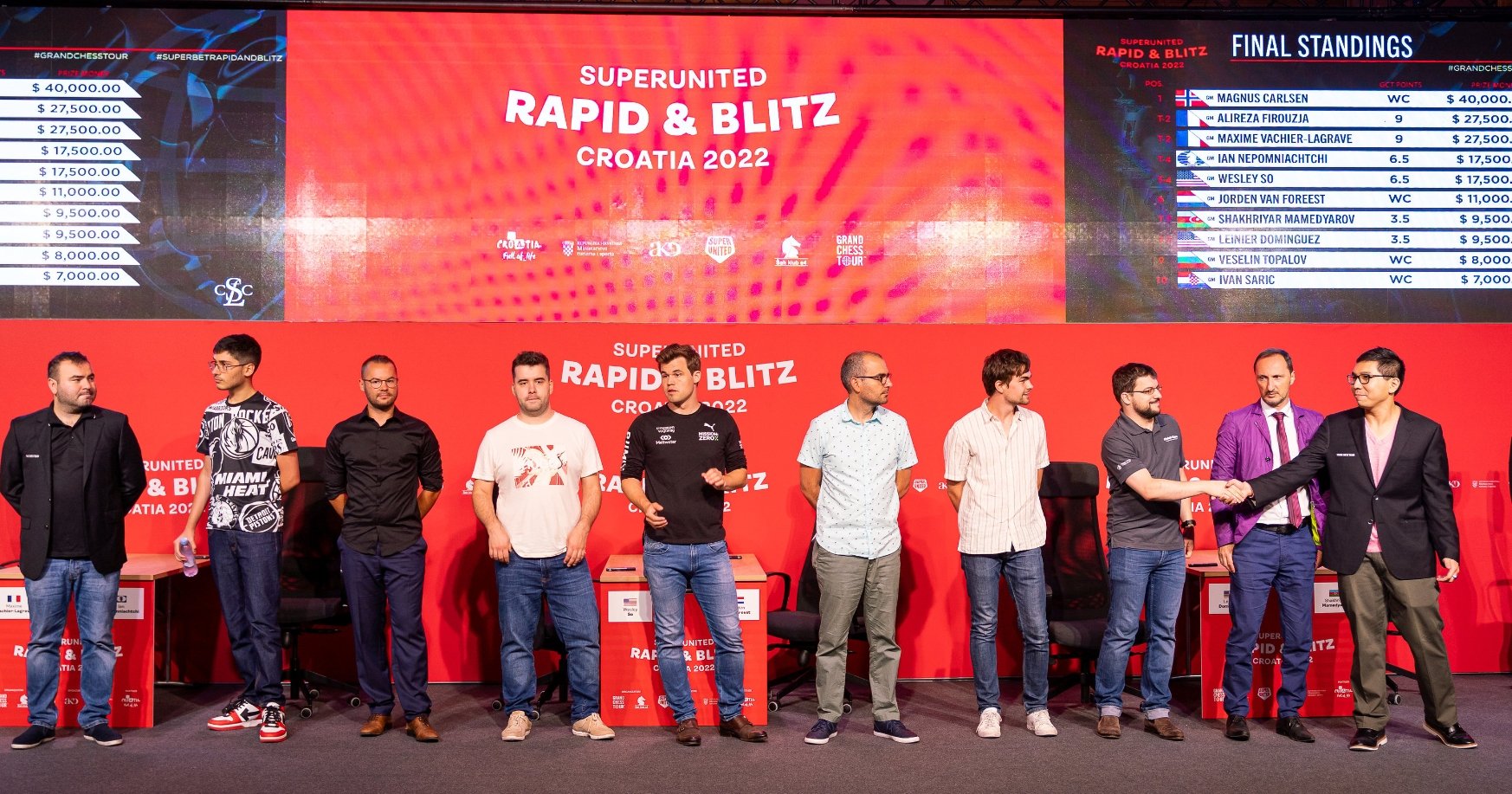 On the weekend of July 9-10, I made an express visit to Bremen for the end of the Bundesliga. Although I was unwell at the time, I was able to bring two draws with black, and participate in the new German championship title of Baden-Baden.

A few days later, I left for Zagreb, along with my fellow countryman Alireza Firouzja, to play in the Grand Chess Tour 2022 Rapid & Blitz tournament.

A good start in the tournament despite a not very controlled opening.

My previous …Na6-c7 maneuver was not precise so I tried to complicate things by preparing …f5. I think Veselin was afraid of this move and he made the bizarre decision 12.dxe6? which turns out to be a strategic mistake because …f5 would have been at least as risky for me as for him! After 12.dxe6? Nxe6 followed by …Bb7, I was able to put pressure on e4 and quickly take an advantage.

A very funny game to end the first day of play…

An extremely complex game in which I almost cracked under pressure and ended up in an inferior endgame, which I managed to hold.

Despite 50 torture moves, the draw was signed at move 104!

I got a good position against a marginal opening line, with a very quick h3-g4-Bg2 against the Sicilian. But as often, it was in the transition from opening to middle game that I had to lose a bit of momentum. Of course, this is a phase which is one of the main difficulties in chess, but there is certainly room for improving my game here.

In short, I found myself worse after 20 moves…

Despite a good series of defensive moves, I would have continued to suffer after a normal move like 21.Be4 or 21.h4, or even the more brutal 21.f4. But Alireza wanted to win a pawn he shouldn’t have taken! After 21.cxb4? Nxb4 22.Nxe5, I could activate my pieces by 22…Rd8 23.Be4 g6 24.h4 Nd5 25.Bd2 Rb8. After that, I played a very good game I think, with quite a few tactical points. That said, it became a hell of a game to calculate, and there were certainly mistakes on both sides; in a position like this one, it’s pretty normal.

But what’s not so great is that I missed the conversion when I had ended up with a winning endgame, plus a lead on the clock.

As I had already had two very long games, I refused to play against Saric’s Najdorf and chose 3.Bb5+, but I got absolutely nothing throughout an insipid game.

After once again being inaccurate at the end of the opening to counter white’s pawn sacrifice, I made the drastic decision to flee forward; give the pawn back and immediately sacrifice another one right after, in an attempt to free up my position!

Rather than passively defending myself, I therefore preferred 19…Ne7 20.Bxb7 Rxc1 21.Qxc1 d5!? even if after 22.Bxd5 Rc8 23.Qe3, white’s advantage has certainly changed in nature, but it remains unquestionable; it is no longer « pawn down with big compensations », but « pawn up and not enough compensation for black »!

But his reluctance to weaken the white squares by playing e3 allowed me to get back into the game, creating a miraculous counterplay just in time.

Then I amplified my counterplay with …h5-h4-h3, arriving at the decisive moment of the game.

Obviously, my first instinctive reflex was to play 34…Ne5 35.Qd5 Nc4, but I saw that there was 36.Qg5+ and perpetual. And if I play 34…Qf6 immediately, he simply replies 35.Bb3, and 35…Qh4 is always countered by 36.Qc3+ and 37.Qe1. So I fell back to the slower maneuver starting with 34…Nf8! aiming for e6, but not fully appreciating its impact. I didn’t know I was winning; I thought he still had a defense, with 35.Qd5 Ne6 36.g5, but it certainly wasn’t enough in reality. Anyway, I understood that I was not running any risk by choosing this maneuver. Because my Ne6 prevents all checks; it really controls everything and is finally better placed than on g6. As for my Da1, it is still strong and I have the idea with …Df6-h4 in reserve.

But after 38…Qd6?, white had the possibility to free himself by 39.Bb3, since after 39…Qxh2, there would have been 40.Bxf7+! with a more than improbable perpetual! Whether black takes the Bishop or not, and despite the presence of the defending Nf8, black’s King won’t find any shelter…

It’s a pity, and I made a non-game afterwards, putting up very little resistance.

Always well prepared, the American obtained a stable and advantageous position in the 7.Be3 e5 variation against the Najdorf, but I maneuvered rather well in defense, especially with my Knights, to completely annihilate his initiative.

So here are the key or spectacular moments in my blitz tournament games:

28.Bxh5? ; an intuitive sacrifice, which would have been possible if 28.fxg6 fxg6 29.Bxh5!? had been intercalated, since 29…gxh5? would now be impossible because of 30.Qxh5, taking advantage of the f5-square for the Knight and the h5-e8 diagonal for the Queen. However, after 28.Fxh5? immediately, Saric could have safely taken because after 28…gxh5 29.Nxh5 Bh6, white’s attacking potential is clearly insufficient. But he trusted me and after 28…Qe3? 29.fxg6 Qxc3 30.gxf7+ Kf8 31.Qg4! my attack became irresistible.

A very good game on both sides, which was decided in the very last seconds.

Necessary was 59.Kc5!, but who can be sure to defend such an endgame perfectly with only two seconds per move?

After a game full of twists and turns, Alireza and I were victims of hallucinations in the final rush:

I suppose black’s position must be winning in the long run, but not after 45…Nf3?,completely forgetting 46.Rd1 and I lose a piece. This was followed by 46…Nxh2 47.Rxg1 Ng4 and the position is a draw, nobody being able to do anything, except after 48.Kh4? Rc7! and 0-1, mate being unstoppable!

In this position, I played 31.Bd3 Bg6 32.Bxg6 fxg6 33.Qe4 with a very slight advantage in the Queen endgame, transformed into a win after many adventures. But instead of this,, the position contained a rather elementary win, but I missed it completely: 31.c5! dxc5 32.d5 and the pawn goes!

The overall result is rather positive: 5/9 in the Rapid (with 5 blacks), and a mediocre first day of blitz (4/9), compensated by a huge comeback the next day (8/9). Strangely enough, my friend Alireza had an almost similar performance to mine, and it is therefore logical that we share the second place in the final ranking, half a point behind Carlsen, untouchable in Croatia.

I have already spoken several times about my non-participation in the Olympiads in India, and I take this opportunity to wish good luck to the French teams. The next step for me will be a month-long trip to the United States starting August 12. After a few days of rest, I’ll go to Connecticut, where I will be present during the Bridgeport Open (August 19-21). On the 23rd, the mythical Marshall Chess Club in New-York has invited me to give a lecture and a simultaneous display. I’ll then fly to Missouri the next day, where the Grand Chess Tour starts again in St-Louis, with the Rapid & Blitz from August 26th to 30th, then the Sinquefield Cup from September 2nd to 12th.

The day before his departure to Zagreb, Maxime went to Saint-Denis, in the suburbs of Paris, to learn the new trendy racket game, padel. Accompanied by a few friends, including GMs Laurent Fressinet and Sébastien Mazé, he was able to discover this intense sport, as shown in this photo taken by Laurent Fressinet… moments before the drama!

Indeed, a few minutes later, an unfortunate smash earned Maxime a return of the racket on the face, with however more fear than harm. But the glasses didn’t resist… Too late to change them before the plane the next morning, but fortunately for him, an old spare pair was lying around in a drawer. This saved him from having to play in Croatia « almost blind »!