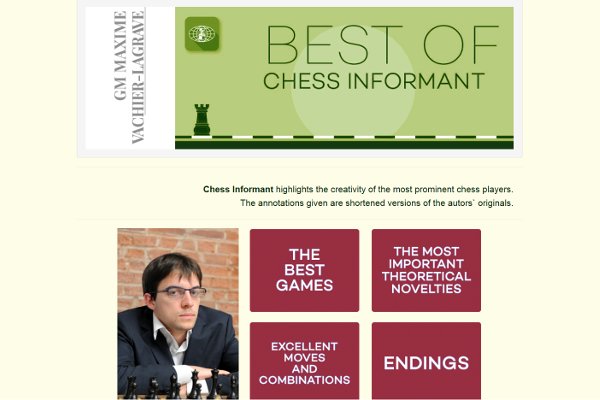 Chess Informant is a real institution for chess players. The older ones will remember that during the pre-computer era, the Informant was awaited like the Messiah. This compilation of the semester best games was indeed the main source of informations on the latest developments of opening theory.

Born in 1966, the Informant has based its reputation on a double system, today internationally recognized : the sorting of openings according to a 500-entry code (from A00 to E99), and the wordless annotation of games with specific chess symbols. Thanks to this ingenious system, the language barrier was no longer an obstacle, and the Chess Informant company products, of which the Informant is a front rank one, were in a position to be sold worldwide.
It is true that nowadays, you can access all informations live in a mouse click. But the Informant managed to survive this evolution. Switching from a 2 per year to a 4 per year rythm, going digital – but still keeping the paper – the famous Serbian publication diversified its contents and easily crossed the decades. New columns have been added, including a « Best of », launched in 2017, which offers a complete focus on an elite player.

In issue #135 that just came out, it’s on Maxime that the Informant has chosen to cast light, through a selection of his best games, his excellent combinations, his most important theoretical novelties, and his remarkable endgames…
Here are positions from each of these four sections, with the kind permission of Chess Informant editorial board :

Maxime considers this game to be one of his best in 2017 ; it was played in January during the Gibraltar festival : (link to the article in french, https://www.mvlchess.com/2017/02/12/gibraltar-un-roc-pour-les-echecs ).

This combination is perhaps not the most attractive of all those submitted, but it conceals a tactical finesse in a key variation that was missed by the world champion. A detail which changed dramatically the outcome of the game, and of the 2017 Sinquefield Cup… (link to the article in french, https://www.mvlchess.com/2017/08/14/saint-louis-comment-jai-rafle-la-mise ).

The Informant has selected twelve games from Maxime in its Novelties section, including ten where he is black. You find a lot of Najdorfs (what a surprise !), but let’s rather have a look at an anti-Grünfeld with an original seventh move…

During the 2015 World Cup in Baku, Maxime knocked Wesley So out in the round of sixteen, thanks to a splendid endgame in which his knight demonstrated tremendous skills against threatening white pawns.

[otw_shortcode_quote border=”bordered” border_style=”bordered” background_pattern=”otw-pattern-1″]Terres de parolesMaxime was under the spotlight during the literary festival « Terres de parole », which was spread for a month throughout Normandy. On April 22 in Belleville-sur-mer, the former football international Vikash Dhorasoo came to present his fresh autobiography, « Like his feet », and a crossed lecture of his book and of Maxime’s one « Chess player », was completed. « The self-portrait of a chess grandmaster and of a Le Havre child who became an international football player ; champions stories at a man’s height », writes the festival website. It’s also a wink from Maxime, who became passionate about the Olympique Lyonnais in 2000, on the year when Vikash was transfered there, to take on the playmaker position ![/otw_shortcode_quote]