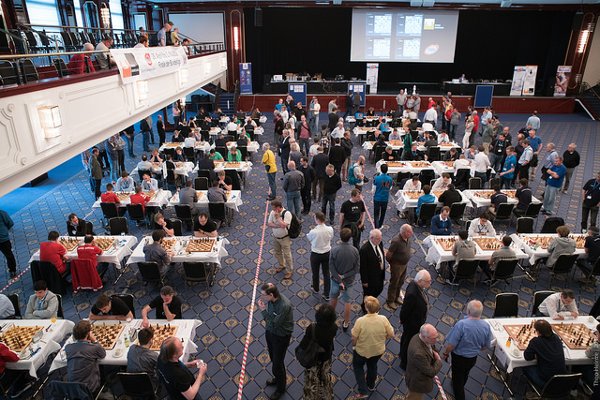 It’s the second time the Bundesliga gathers in the main room of the Berlin Maritim Hotel, very close to the center town. With sixteen teams around playing the last three rounds of the year’s championship, it can be said that this long weekend was the culmination of the year, a kind of huge chess party. In sporting terms, we (Baden-Baden) began the final weekend head to head with Solingen, with the hope of winning this long_distance affair in one of the three rounds.

This time, Levon Aronian was there, and I played second board. I knew I would begin with white against our most difficult opponent, Hockenheim.

Facing England #2 David Howell (2699), I repeated the same variation against the Berlin than the one I chose against Jakovenko at the Sharjah leg of the Grand Prix FIDE (article in french). It’s barely anything, but I somehow had the feeling that I kept the initiative, notably when he had to push 19…h4, letting the pawn as a potential weakness in the long run. I then got a rook and opposite-coloured bishops endgame a pawn up.

The next day, against the Hungarian GM Adam Horvath (2486), I got what I wanted in the 6.Be2 Najdorf, including a c5 Knight against a white-squared bishop, alongside a queenside pressure.

From memory, I regretted playing 35…Rd8 instead of 35…Rc7, which would have prevented him from regrouping with Re2-e3, as after 35…Rc7 36.Re2? Nxb3! 37.Rb1 (37.Rb2 Ra7!) 37…Ra7 38.Qb2 Nd4!. Nevertheless, I still managed to win a pawn after the time control : but with all the pawns on the same wing, the technical task to convert is often huge, the more so as I couldn’t – or wasn’t able to – keep all six heavy pieces on the board, and had to quickly exchange a pair of rooks. Then I could have chosen to enter the Queen endgame, but I already had the opportunity to defend it, and at the time, it didn’t look so terrible to me. So I took my chances in the rook ending, and luckily, he missed the opportunity to liquidate into a trivial draw by 63.f4! Rxg3 (63…exf4 64.Kxf4) 64.fxe5 fxe5 65.Kxe5.

Then we had this rook endgame with e and f pawns against f, which is not so easy to handle in practice, with thirty seconds per move. White must pay attention to a lot of things ; to my king which turns around the board, to my pawn duo on e5-f4 which creates new opportunities… If I were him, I would have stopped the king’s entrance by 79.Rd3 (instead of 79.Ra6+), but the fact is that there’s always a gap beetween the knowledge of a drawn ending, and the practical ability to prove it, move by move, under the clock’s pressure !

So my king was allowed a long journey through the board, up to h2, and I thought I was winning after 88…Rg2+. This is actually the case after 89.Kf5? Kg3! but, final twist of this endgame, 89.Kh4! was still holding the draw for him !
This meant a second win in a row from an objectively drawn, but practically difficult, endgame.

The last game, as usual in Bundesliga a morning game, didn’t give the expected result. German GM Ginsburg (2428) took quite a lot of time, but was rather precise throughout the game. In the opening, I decided to replicate the King’s Indian scheme chosen by Carlsen against Caruana in their latest encounter at the Grenke tournament, when white puts his pawn on e3. Fress’ wry smile during the game made me understand that the provocative manoeuver …Nc6-b4 must have been an impro from Magnus, which is what I already suspected… But following Magnus on those grounds was also a bit of an improvisation on my part !

In the final position after 26…Bb3, I understood that white was going to play 27.Qc3, then Rac1 and Bc4 with full equality. Therefore I didn’t insist and I offered a draw.

[otw_shortcode_quote border=”bordered” border_style=”bordered” background_pattern=”otw-pattern-1″]Back to BerlinBaden-Baden and Solingen both won their three matches, and are tying for first at the end of the league. But both teams left Berlin without knowing who is champion !
What strange rules are used in Bundesliga… In case of a tie on match points, boards points are the tie-breakers, except for the title ! Indeed, a tie for first implies to replay a match, and not even on the same day at rapid chess, an option which would have had the merit of simplicity. But the regulations stipulate that the tied teams should rather play again at classical chess, with the one who has the higher number of board points receiving (Baden-Baden), and within fifteen days !
With part of the world elite involved in this playoff, there’s no doubt its organization is bound to be a real headache ![/otw_shortcode_quote]