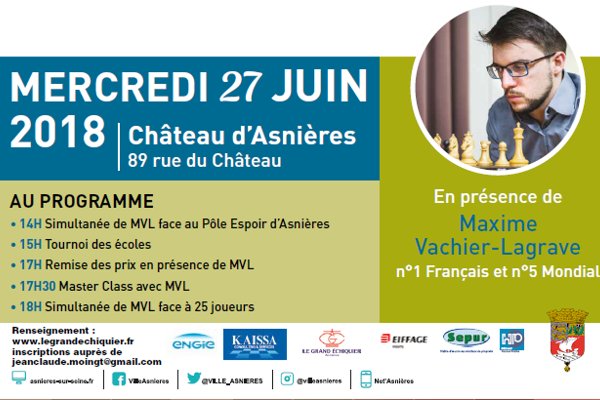 The Asnières chess club, in partnership with the city, organized on June 27 a « Trophée MVL », held in the heart of Asnières’ castle. This event was meant to close the chess season, and all afternoon long, pupils who learnt chess in school, members of the club, and various personalities, gathered inside the historic walls.

Simultaneous displays against children, and then against adults, prize-giving of the scholarship tournament, photo sessions, small private masterclasses, a busy program was awaiting Maxime, who was the patron of this sunny day in honor of chess.

Maxime all over the place !

Maxime will have done a bit of everything during this afternoon. And you could even find him where least expected, that is helping to record the results of the schools tournament, and operate as a deputy arbiter !
You need a proof ? Here it is !

In this kind of festive event, the result itself is generally irrelevant, but it still has to be noted that Maxime won all of his games. The ones of the simultaneous display against the children, but also the 26 against the adults, where you could find a few players rated around 2000 Elo.

A few personalities had decided to join the show and to play against Maxime, among them Jean-Daniel Belfond, boss of the Editions de l’Archipel, Laurent Baumel, former Parliament deputy, Faycal Douhane, Bobigny sub-prefect, as well as representatives of HP-BTP and Sepur, the club’s partner companies.

Asnières will play the Top 12 with Maxime

Asnières mayor, Manuel Aeschlimann, was also expected to play, the more so as he used to play competitive chess; but he finally declined, choosing to remain on the delicious memories of a fighting draw he earned in simultaneous against Karpov, back in his prime !

By the way, here is a nice tactic picked up from one of these 26 games…

But this festive day was also a good opportunity to officially announce the arrival of Maxime in Asnières’ club, for whom he will play next season 2018-2019. Indeed, Asnières just won its N1 group a few weeks ago, and will thus access the Top 12 next year.


With GMs Jules Moussard and Matthieu Cornette, whose arrival in Asnières was also announced, these are three prominent squad additions for an Asnières team which, no doubt about it, will aim for the national title as soon as it appears in the Top 12 Elite division, scheduled in May 2019.

Maxime is currently enjoying some well deserved holidays.
We will be back on this website at the beginning of the Biel tournament, on July 22.

[otw_shortcode_quote border=”bordered” border_style=”bordered” background_pattern=”otw-pattern-1″]Asnières
Famous video about Asnières (in french) https://www.ina.fr/video/I06268515/
In the days prior to the « Trophée MVL », Asnières’ castle saw all the Grand Chess Tour players coming. Some of them, Maxime included, honored with their presence the « Rencontre des 400 », organized for the school audience by the Ligue d’Ile-de-France des Echecs. And all of them were there for the Paris Grand Chess Tour prize-giving ceremony.
For its part, the French Chess Federation, besides its own installation in the castle attic, organized at the same time two national finals, a few hundred meters from there, in Asnières’ Petit Théâtre.
Asnières, the new place to be of french chess ![/otw_shortcode_quote]