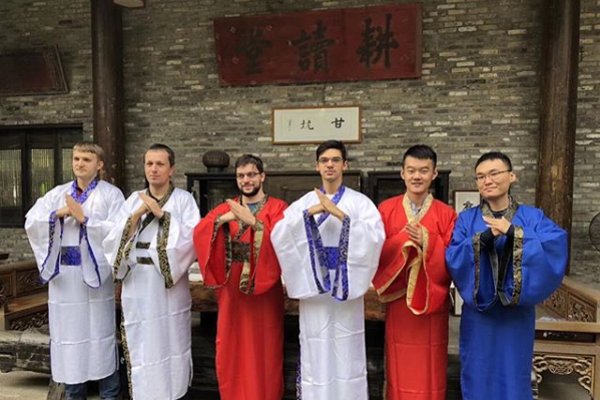 I knew that in order to play this tournament in China, I would have to come to terms with a very long journey… After a 12-hour flight to Hong Kong on November 1, a car sent by the organizers picked me up for what I guessed would be a 2-hour drive towards the Chinese town of Shenzhen.

But I didn’t anticipate the customs controls when entering the town, nor did I take into account the trafic jam!
The tournament itself was a double round robin with 6 players, the Top Chinese (Ding Liren and Yu Yangyi), two Top 10 members (Giri and myself), and two other foreigners invited (Wojtaszek and Vitiugov). It took place in the magnificent Shenzhen Castle Hotel.

Round 1: Vitiugov (2709)-Mvl 1/2
I prepared my round 1 game against Vitiugov by looking at Dreev’s games, as the latter was in Shenzhen as his second, which I had noticed! And Dreev played exactly the same variation that appeared in our game a mere three weeks ago… The surprise effect didn’t really work out!

Round 2: Ding Liren (2816)-Mvl 1/2
A draw which looks easy in a classical Rook endgame with 3 vs 4 on the same wing, but Ding could have avoided it and cause a few problems, had he declined to exchange Queens as he did, and played 19.Qg5! instead in the following position:

Round 3: Mvl-Wojtaszek (2749) 1/2
In the 6.g3 Najdorf, which I often faced with black, the Polish tried a new idea which allowed me to enter an ending one pawn up, but it was no picnic to convert.


The Bishop pair stops the King’s path. White would be winning if it could get through the Queenside. Despite twenty more moves of trying, I didn’t succeed.

Round 4: Mvl-Yu Yangyi (2764) 1/2
Not a lot to say. The advantage of playing against black’s doubled f pawns in this specific variation of the Russian defense was less significant than I thought.

Round 6: Mvl-Vitiugov (2709) 1/2
A well-played game I believe, my only mistake being to agree to the draw by perpetual check.

Indeed in the diagrammed position, instead of 31.Na7+, I had the option of 31.f5 Bh7 (31…Bh5 would take away the square from the Knight) 32.Bg4!, and I can continue pressing. Because either black plays 32…h5 33.Bh3 and I don’t have to bother anymore with his …Nh5 counterplay, or he opts for an ultra passive setup. I don’t mean I would have won, but had I seen the idea with 32.Bg4!, I could have played on without risk.

Round 7: Mvl-Ding Liren (2816) 1-0
A game on which I’m going to dwell more specifically, as it is my only victory, and the reason why I ultimately won the tournament!
This game will also remain for posterity as the one which will have broken Ding’s unbeaten streak, exactly at 100!
In the fashionable Italian variation with 7…a5…


I chose the rare line 8.Bg5 h6 9.Bh4 g5 10.Bg3, that I know is dangerous for black. Incidentally, this is what I was supposed to play in my Speed Chess match against Nakamura in october,
But I had completely forgotten about it during the whole evening of online blitz, systematically opting for my « old » 8.Nbd2 variation!
Anyway, in China I remembered it, and after 10…Ba7 11.Na3, he uncorked the novelty 11…Nh7 (idea 12…h5), interesting though risky. I believe his main mistake came later, in the following position:

Round 8: Wojtaszek (2749)-Mvl 1/2
Again an easy draw with black, the Polish player – who was struggling in the tournament – having chosen one of the most solid systems in the g3 Grunfeld.

Round 9: Mv-Giri (2780) 1/2
I quickly found myself slightly worse with white, showing off in the London system different move orders, of which I am no specialist. As against Ding, I nevertheless was able to defend rather easily a Rook ending 3 vs 4 on the same wing.

Round 10 : Yu Yangyi (2764)-Mvl 1/2
I’m going to elaborate on this last game as I quickly was aware, after the Ding-Wojtaszek draw, that if I managed to earn a half point from it, it would guarantee the win of the tournament.
I thought my position was just fine after the opening, until I panicked when I saw his 21.f4, for no reason whatsoever:

Here, the « normal » move 46…Kh6? would have been answered by 47.h4! with an almost certain win for white, as I would have been facing an unenviable choice between losing h5, or allowing white’s King to overflank on the Queenside via c2-b3-b4. In fact, white’s threat 47.h4 is too strong, and I played the only move 46…h4! 47.gxh4 Kg7, after which white has no more means to transfer the King on the Queenside without conceding a lot of counterplay against both his doubled h pawns!

Finally, I won the Shenzen tournament with only one victory (+1, =9, -0), maybe an unique occurrence in chess history! The rules stipulated that the Sonneborn would be used as a tie-breaker, which allowed me to precede Ding Liren and Giri, both in the 5.5/10 group, together with me.

Before to leave for the 2018 Grand Chess Tour finals in London on December 9, I will offer an analysis of the Carlsen-Caruana World Championship match, currently still in progress.

[otw_shortcode_quote border=”bordered” border_style=”bordered” background_pattern=”otw-pattern-1″]The new fashion in Elite chess tournaments seems to be the filling of rest days with unusual challenges for the players, eg. activities they’re not supposed to be comfortable with. Norway Chess launched the trend with its « farmer’s challenge » in 2017, and its culinary contest in 2018.
In Shenzhen, the organizers offered the four european players to test their skills in local activities; chinese writing and making of chopsticks! History didn’t record the results. [/otw_shortcode_quote]