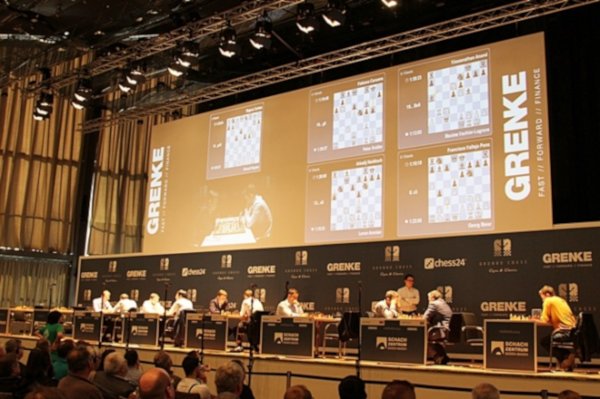 Three months after I played in my last tournament (Gibraltar), the Elite season really took off on April 20, when the traditional Grenke Chess Classic organized by my German team Baden-Baden began.

As usual, the first rounds took place in Karlsrühe, alongside the gigantic Grenke Open, which gathered more than 2.000 players this year! Among them, a lot of french friends, with my trainer Etienne Bacrot and my Asnières teammate Jules Moussard as leaders. Although both unbeaten, they could never play a key role in the tournament, because of the too many draws they conceded.

The Grenke Classic offered this year a very strong line-up, leaded by Magnus Carlsen, in a state of grace those last months. With vice-world champion Caruana, as well as Anand, Aronian and myself, it is half the World Top 10 which was gathered in Germany. Three members of the Baden-Baden team also made the trip (Svidler, Naiditsch and Vallejo), and the field was completed with German players Meier and Keymer. The latter, only 14 years old, was making a noteworthy entrance in a tournament of this caliber, thanks to his victory in last year’s Open.

Quite a difficult introduction, as I didn’t expect Vishy to enter this heavy tactical line of the Advance Caro-Kann. So I found myself falling between two chairs – so to speak – hesitating between taking a draw already known by theory, or trying to remember all the subtleties of a line I had previously analyzed. When I fully understood that I would never remember all details, I chose the path of wisdom!

I was expecting with delight a Najdorf debate, but Fabiano shied away from it, and had me wrong-footed with 2.Nc3 followed by 4.Qxd4! I had the feeling I equalized though, but the reality is that a few good moves gave him the edge, in particular 19.Kd1! in the following position.

It is known that I remain one of the few Elite players to keep on fighting the Berlin Wall! The fact is that the opening went well, and I got an edge. My problem was that I had a lot of options, and I probably didn’t choose the best one, at least from a practical point of view.

I equalized easily against the try 5.h3 in the Grunfeld. After a few midllegame inaccuracies from both of us, in particular when Meier was heavily low on time, we landed after move 40 in an endgame which is probably a draw, but remains unpleasant to defend for white.

However, he did it rather well, and got a clearly drawn position afew moves later. By inertia, I kept on trying, with the vague hope of testing him in the R+N vs R endame if I had an opportunity. That’s precisely when he began to make some rather strange decisions, until the culminating point in the following position:

Levon uncorked a new idea of closing the center in an Anti-Marschall position we had already discussed a number of times. Maybe I shouldn’t have agreed to a draw so quickly, but all the possible plans to play for the advantage involved a Kingside expansion, which on the board, looked quite risky to me.

I fairly easily equalized against the English, and Peter took a risk when he declined to exchange Queens on move 12. So I tried to play against his offside Queen on h3.

Unfortunately, here I made the wrong decision of exchanging black squared Bishops by 18…Bh6?!, as I didn’t see any follow-up for the attack. I was not sure to be quicker in case of mutual attacks on opposite sides, a4-a5 being very fast for him, while his Queen might reenter the game if the position opens up. But the computer refutes me , and argues that the simple 18…Be7, as well as the sharp 18…f5!? 19.exf5 Nd5, would both have given me a clear edge! In the game, after 19.Bxh6 Rxh6 20.Qe3 Rh7 21.Rfd1 Rhd7 22.Nf1 and the exchange of all four Rooks, the position quickly simplified towards a draw.

A long game full of manoeuvers, typical of the Advance French. The problem with this kind of position is that you always feel fine, with a space advantage, but it’s in fact never that simple. I tried to organize my pieces so as to be able to sac a piece on the Kingside, but I never found a way to do so in a convincing manner.

The young German is a Sicilian Najdorf fan, but I chose to transpose the fight right into the middlegame with 2.c3. In a rather simple and equal position, he opted for the radical 17…b5?!, whose idea is to get control of d5, even though at the cost of time. He had no obligation to do so though.

After 18.cxb5 Nb4 19.Ne5 Qxb5 20.Rh3, I was able to play my Rook all along the third rank, alternating threats on both wings. I ultimately forced the weakening …f5. Maybe the position was still within equalizing margin for him, but it’s really tough to defend in a practical game! He had a last chance in the following position, however with very few time left for his remaining 4 moves.

A very difficult game against an amazing Carlsen, who was almost assured of the tournament victory before the last round. On the board, I decided not to play my usual systems against the English, opting for the flexible variation with …d6 and …Ff5, while avoiding his prep on the way.

Nevertheless, I was a bit surprised by his move 9.Be3, with the clear intention of playing d4 in good circumstances.

But there was no reason to overreact with …a6-…b5 as I did. I had various other « normal » options at this moment; for example 9…a6 10.Qd2 Rb8, with the idea …b5, but without sacrificing the pawn! But having said A, I went on with my idea and said B, pushing 10…b5? immediately. I thought I had compensation after 11.cxb5 axb5 12.Nxb5 Qa5, but I quickly realized the truth, ie. that it was not to be! Nevertheless, I could ask Magnus tactical questions, and he had to find a transposition in a Queen’s endgame with a pawn up.

Thanks to this final win, Carlsen won the tournament with the staggering score of 7.5/9. There’s nothing to add; just applaud…

As for me, I felt I was not really in great shape in this tournament, and I didn’t play any particularly inspiring game. The result is more or less ok, not the quality of the games.

From now on, the calendar is speeding up, as I will fly on Monday, May 6 to Abidjan (Ivory Cost), where the first tournament of the Grand Chess Tour 2019 will take place, May 8-12.

It is not so frequent that Maxime is approached in Paris streets, in particular in the Jardin du Luxembourg near his flat, where you can often see him walking or jogging. Well, this is not so frequent :), but it gives chess amateurs who recognize him the opportunity to exchange a few words, and to encourage him for his forthcoming competitions.