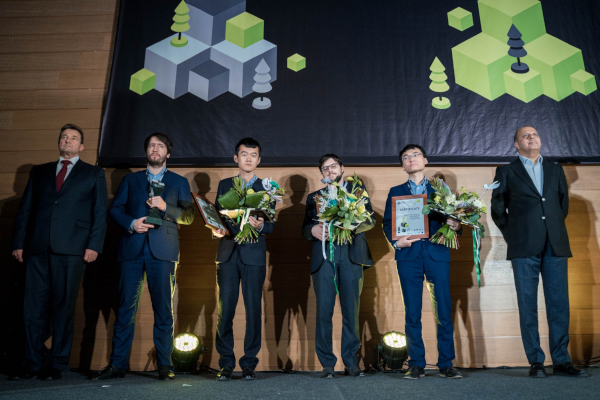 In the first game with black, I knew what I was getting into when I entered this line of the 5.Bg5 Grünfeld. A position slightly difficult to defend where I will have to find one or two precise moves to equalize completely; which was the case after 25…f5! (draw, 44 moves).

In the second game, I improved the variation of the Italian I played a few days earlier against Jakovenko, with 15.Ne4 instead of 15.Qe4.

In the first Rapid game, I got a good opening position with black.

At one point, while trying to put pressure on the clock, I got a little carried away with 15…Bc6, forgetting 16.Ne4!. I should have played 15…Nc6. I know that Magnus, who was commenting live, rather criticized the next move 16…Bxe4, but at the board, I had the feeling that I had already spoiled the advantage. So Magnus and I come to the same conclusion but with a one-move delay!

After that, in my mind, I was still playing for the initiative. Besides, I’m puzzled that this position is not so good for Black, because when you look at it, it doesn’t seem bad at all! Still, I was a little surprised that he offered me a draw, because I saw a complex endgame coming up, where everything was still up for grabs (draw, 31 moves).

In the second tie-break, I had a good position but I really got tangled up with it.

Here, I realized that black’s Knight was going to land on c5 and that I would have nothing left to play for. So I decided to go 22.Qc1 Nd7 23.Qa3 Nc5 24.f4. Obviously, I was very wrong because of 24…exf4 25.Nf5 Qf8 26.gxf4 Rf6 followed by the exchange sacrifice 27…Rxf5!, exploiting the absence of white’s Queen around the King. But you had to see the sac from the beginning of the variation, and I missed it throughout the line. Without this sacrifice, what I did would not have been so criticized! So it came as a cold shower to me, because at no point did I realize that there was this 27…Rxf5! looming. A few moves later, Levon missed a direct win, which I hadn’t seen either 🙂 ; but in Rapid games and tactically rich positions, these are inevitable things, you can’t see everything as the machine does.

After that, I felt that he no longer had much of an edge; and instead of taking the draw by perpetual check, he screwed it up horribly by giving a piece. Obviously, he understood right away what he had done and his face kind of crumbled (1-0, 53 moves).

It has to be said though that the World Cup format is very violent; we had the same day the dramatic Armaggedon game between Yu Yangyi and Vitiugov, a true breathtaking highlight of its kind….

In the first game, I played the first move of the tournament I was proud of; it was 11.Re1.

Besides, it’s not the move I had in my file 🙂 but at the board, 11.Re1, with the idea to play Be3, I really liked it. I was thinking it was a bit of a Grischuk move! You think about this position for 15 minutes, everybody wonders why as it seems to be useless; then you play this little move that looks harmless!

In fact, I rejected it because I didn’t like the position after 20…d5 21.Ra7 Rb8, and 21.exd5 cxd5 22.b4 d4 also seemed very messy to me; I thought it could easily go wrong… But the truth is that it’s just a clear advantage for me, even though the position gets much more tense, and without any guarantees! As I played, I just gave up the advantage straight away (draw, 31 moves).

In the second game, as usual, I failed in the opening. I know I shouldn’t have played so fast…

Later, the commentators felt that I would have had a small chance by exchanging Queens, which I could have done twice. But for me, the resulting endings were technically lost, so it wasn’t really an option either (1-0, 45 moves).

As a result, I came out of the World Cup through the back door, missing my direct qualification for the Candidates at the last hurdle once again. That night, I was disgusted and I would have flown back to Paris right away, but no way it could be! There was still a week left to play the match for third place against Yu Yangyi!

So I tried to think of something else, I did a little bit of everything for the two days off before this last match. I had already been in « power saving mode » for some time, and it was even more so against Yu.

In the first game, he played a new move in the main line of the 5.Qb3 Grünfeld.

In the second game, I didn’t expect him to play a Russian line he had tried a few weeks earlier against Wei Yi, but which seemed a little artificial to me. But the fact is, I didn’t get anything… (draw, 30 moves).

In the third game, I was in trouble in a very rare line of the Exchange Grünfeld, with an early 9.d5 push.

I decided to react in a very concrete way by amplifying the central tension with 12…f5, which was clearly not necessary. He responded very effectively!

In the last classical game, Yu made a surprising new choice in the Russian Defense. I thought I was a little better in a position that reminded me of the Topalov-Giri game, Wijk aan zee 2012, won by white.

It seemed to me that in the long run, as in Topalov’s game, white’s King was safer than his counterpart. It’s true I had forgotten the doubled c pawns of Giri, which were an aggravating factor for black.

In our game, I may have overestimated my position because in fact, I can’t play g3 and f4 to fix the structure, in which case I could have pounded the e6 pawn and claimed the advantage. Unfortunately, if instead of 19.Td2 in the diagrammed position, I had played 19.f4 – which was indeed my first idea – black completely equalizes with 19…Qf7! 20.g3 e5 and a drawn endgame is coming up. As a result, I couldn’t find any realistic way to play for the win (draw, 30 moves).

In the first tie-break game, Yu gave up defending a third Russian Defense! Overall, I played a good game, even if I missed a quick mate that would have ended his suffering earlier!

In the second Rapid game, he had to win but he completely screwed up in the opening and I won easily.

Even if a bronze medal at the World Cup remains an excellent result, I still have mixed feelings about the month of September I spent in Russia 🙂 . However, before the World Cup, I was counting much more on the FIDE Grand Prix series. The World Cup was a ” bonus attempt ” to qualify for the Candidates; I considered that I had a 15-20% chance to succeed.

Of course, it’s frustrating to lose in the semi-finals and to end up being the first unqualified player once again. But on the other hand, there were a lot of very shaky moments, and I could really have been ousted of the tournament earlier! Overall, I didn’t play as well at this World Cup as I did in 2017, when I think I really deserved more.

Now, I have the last two FIDE Grand Prix tournaments in Hamburg and Tel-Aviv left; I think I have a good chance of qualifying, over 50%. As for the speculations on the wild card that the Russian organisers will give, I prefer to leave them to the commentators.

That’s not my subject right now… Mine is to be at the top on November 5th in Hamburg!

The French team is currently competing in the European Team Championship in Batumi (Georgia). As he had the opportunity to explain several times, Maxime had decided at the beginning of 2019 that this year’s international calendar would not allow him to participate. It is clear that this problem of flagrant imbalance between the two semesters of the year, one very airy, and the other very congested, will have to be resolved as a priority for the 2020 season.
Let’s take advantage of the European Championship underway to watch a nice video animation that traces many figures on the French chess Elite since the beginning of the century… (thanks to Natacha for the realization) 🙂 .
An opportunity to learn that Maxime has just celebrated another birthday than his 29th one, since with 106 months spent as France’s top player, he has beaten the old record held until now by Joël Lautier (105 months between 1990 and 2004)!