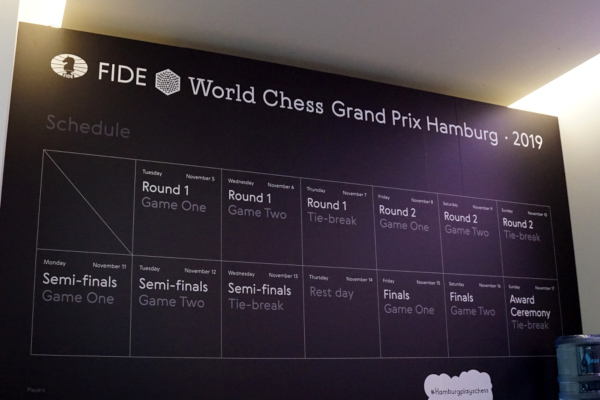 There are still two places to be distributed on sporting criteria for the Candidates’ Tournament, via the 2019 FIDE Grand Prix which is coming to an end. The Hamburg tournament has just ended, and the final stage is scheduled from December 11 in the heart of the historic district of Jerusalem.

In Hamburg, it was therefore a question of getting ahead before the sprint… For the occasion, the large port city of northern Germany had made a theatre available for the event. Some have been disturbed by the level of the organization. For my part, I have few complaints about the playing hall. Just that it was a little difficult to reach the toilet level; there was a big staircase to climb, not a very convenient access during a game. But it is true that it was linked to the configuration of the premises, in the heart of an old theatre. For the rest, I didn’t have noise problems to deal with, I found the room quiet, quite spacious too, even when there were 16 of us. Maybe a little dark, but hey… It was no luxury, but there was really nothing to complain about, unlike what we saw in Zagreb this summer! (Editor’s note, stage of a Grand Chess Tour event).

In the first game, I was able to place a nice prep against the Najdorf, which had been cooked by Matthieu Cornette during the Top 12 in May. He sent me a file by email during the Norway Chess in June. I liked the idea of playing 6.g3 without putting the Bishop in g2, and I decided to try it at the next opportunity! So it worked well and I took and advantage out of the opening.

Najdorf again, but with reversed colours, for the second leg. In the 6.Nb3 variation, it was Peter Svidler who explained to me after my match against him in the World Cupthat the easiest way was 6…e6. I was obedient and actually got a good position pretty quickly, before even taking over.

I know there are people who didn’t understand why I often accepted draws in favourable positions during these mini KO matches. First of all, because the Elo race from the Candidates’ perspective has been over for me for some time . Secondly, because in this context, ensuring the bonus point remains the most important. And finally, I have no reason to spend two more hours playing, because the energy saved for the next round is also a factor. (1/2, 27 moves).

In the first game, I played a kind of delayed Benoni with black. I managed to keep delaying taking on d5 for a long time, and I regretted finally doing it on the 14th move.

The critical moment afterwards was when he decided to give the exchange with 28.Re3!?.

I controlled the secong game with white pretty well, playing the Exchange variation against the French, recently used a few times by Etienne Bacrot.

I locked everything up, but the important thing in these cases is to play with a plan, however basic it may be, and not to wait stupidly; in this case, a4 then b4-b5.

With white, I was surprised by his choice of the Arkhangelsk Spanish. As a result, I hesitated between 13.Bc2 and the resulting ton of theory, and 13.Be3, which is less risky. I chose the latter and got a very small plus, but I started making small miscalculations…

Maybe if I had focused a little more on the position, I would have chosen 23.Ba2 with the idea Qd2-Rad1, and a microplus for white.

Nevertheless, after 19.Bf4 Qb7 20.Qe2, white remained better. But I thought to myself that, since the opening was not successful, I was bound to have a bad time, but maybe not so catastrophic.

In the game, after 26…h6 27.g3 Rf8 28.Rxa7 Nc6 29.Rd7 Ne5 30.Rd8, I saw this endgame Q+N vs Q+B with the passed a pawn coming, and thought I should find some resources. The truth is that it’s really hard to be precise in this position, a very difficult one to play. I chose the endgame transition 30…Qc7 31.Rxf8+ Kxf8 32.a4 Ke7;in fact, I wanted to have the King in the center, and not cornered after 30…Rxd8 31.Qxd8+ Kh7. I thought it was more important than keeping my Queen active; but again, these are really extremely difficult decisions to make.

Then, he offered me a little respite with 37.Qd7?! ; I had seen that in case of 37.Qa8!, threatening to take my King for a walk, I would have been in dire straits!

After move 40, I realized that if I kept Queens, I wasn’t going to hold the position. It is counter-intuitive, because normally you tell yourself that the Queen will allow you to generate counterplay and leave the white’s King at a distance. But in reality, as my Knight is out of the game, it is actually the Q+B couple that does too much damage, especially after forcing me to weaken the white squares by touching my f7 pawn!

After that, the resulting minor pieces ending is too hard to evaluate, I still don’t know if it is a win or not.

What is certain is that I should have played 47…Ke6! (instead of the defensive withdrawal 47…Kf6? 48.Kh5 Kg7 which gives white a clear plan to win: attack the d5 pawn on the long diagonal, force it to move to d4, then come back with the King towards e4 to surround it) 48.Kh5 d4 49.Kxh6 Kd5 and if it exists, which is well possible, it would take Sesse to show us the win ! It’s too hard, there’s too much to calculate 🙂 .

Anyway, Sacha played very well in this game. Sometimes you just have to accept that you haven’t played a good game and that your opponent has. (1-0, 53 moves).

All in all, even if it ends on a bad note, the tournament is not a bad one either. I am currently in second place, a qualifying one for the Candidates. I am a little ahead of my pursuers, and my fate in my hands before the last tournament in Jerusalem.

But what’s rather funny is that as far as the qualification for the Candidates is concerned, it doesn’t really change much whether I’m eliminated in the first round in Jerusalem, or whether I make the semi-finals! If Mamedyarov or Nepo go far, I better go far too. Otherwise, I can still score 0 and qualify. The difference in percentage of chances of qualifying between losing in the first round and going to the semi-finals may climb from 40 to 80%, whereas we have the impression that it should be from 20 to 100%! Finally, it should not be forgotten either that all players who have between 1 and 5 points in the overall ranking still have a theoretical chance to qualify, certainly infinitesimal for the former!

What is certain, however, is that clearly, the drawing of lots will be decisive…

I will also say a word about the announcement made by the Russian Federation concerning the famous wild card for the Candidates….

In principle, giving this privilege to a Russian is not a big concern in itself. Not only was it quite expected , but I’m not that fond of qualifying through this method; I think the wild card should definitely be deleted…

And then, why make us play a match for third place at the World Cup? I played that match, I won it, and it’s no use at all.

I will end on a positive note by congratulating Sacha Grischuk on his success in Hamburg, and for what looks like a quasi-qualification for the Candidates!

The Ile-de-France Chess League and the Beaux-Arts de Paris organized, within the framework of the autumn festival and Anna Boghiguian’s exhibition « The square, the line and the ruler », several chess activities. Especially on October 31, for Halloween, there was a « Meeting of Spells » in the form of an Escape game « Arts, chess and mathematics », in which Maxime participated, a few days before his departure for Hamburg.

Played in the Chapelle des Beaux-Arts – staged for the occasion – this Escape Game consisted in solving mathematical, logical and artistic puzzles using the game of Chess, and this in limited time.