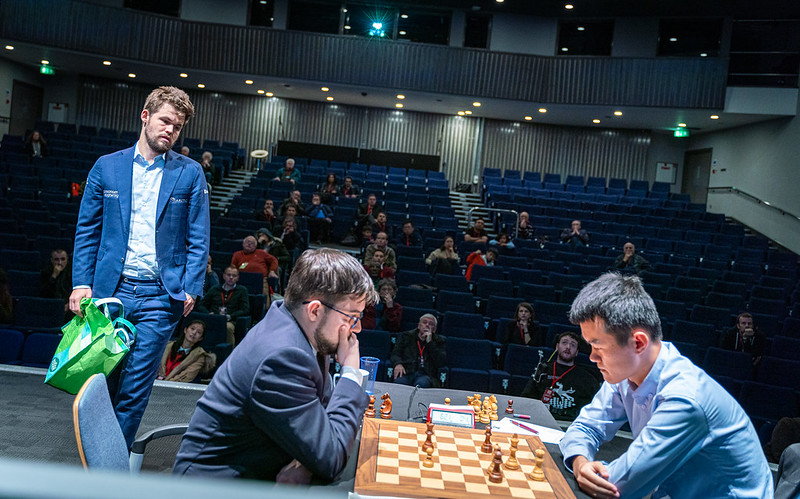 I arrived in London on December 1st, in a familiar environment and in a city I like, to compete in the Grand Chess Tour final, with the same 4-player format than the previous year.

I learned of my qualification at the last minute, as it depended on the results of the other players, especially Anand. It wasn’t the most likely, but I qualified instead. It obviously overloaded my December calendar, at a time when the qualification for the Candidates was about to be decided. But I was pretty happy to be qualified anyway. The challenge was highly interesting; first playing against Magnus of course, and then the second match as well, against Aronian or Ding Liren. So I was motivated, in a format that generally suits me well. The match against Magnus was very, very tense. In the first game, for example, it was really extremely complex and anything could have happened. It ended up being a perpetual after we missed a lot of stuff. After several other draws, I was the first to win in the Blitz, from a position where I had nothing at all, by the way. However, he struck back immediately, in a game where, on the contrary, I had a very good position, but made further bad decisions. Generally speaking, the level of our match was still quite high. Maybe the key moment was when I defended the last Blitz with little time on the clock and a definitely unpleasant endgame.

Then of course, there was the first game of the tie-break with black, which was completely crazy; the advantage changed sides all the time, it was so tactical, but I ended up winning. After that, all that was left to do was to draw the second game; which I did .
Of course, I was very happy to win a 10-game match against the world champion, especially with a mix of cadences. Psychologically, it was a boost, because who else can claim such a result? Unfortunately, we had to go on to the final, and Ding Liren made me come down from my cloud right away, by putting me under enormous pressure in the first classical game. After that, he wasn’t precise enough in an ending that was completely lost for me. Well, I hung in there as best I could, and he freaked out a few times. I finally held the draw in a crazy four-queen position!

In the second game, I found myself in trouble from the start in an English opening. I misjudged the position, and with the advantage, it was clinical from him. It’s mostly a game where there hasn’t been much to do. I wasn’t alert enough, and he was impeccable….. Then in the Rapids, I tried to come back but it quickly went wrong! I still saved the honor by winning the Blitz match by a wide margin.

Overall, the balance of the Grand Chess Tour 2019 is not so bad, as I ended up second for the third year in a row.

Then, the switch to the FIDE Grand Prix was complicated because I couldn’t arrive in Jerusalem until late Tuesday afternoon after a long journey, while the tournament already started the next day. The good news, though, is that the draw looked rather good. Unfortunately, I could see right away that I wasn’t playing at my best. Already in the first game against Topalov I was in great danger; I managed to hang on and I remained unscathed by a little bit of a miracle, but I was really close to disaster. So I decided not to take any undue risks in the classical games. Especially since I quickly understood that the bonus points would serve absolutely no purpose, which was indeed the case. The important thing was to be qualified after each round…

So I focused on the Rapids. First against Topalov, and then against Andreikin, after my opening in the first classical game petered out into a draw, due to a memory error!
On the other hand, in the Rapids, it went well; against Andreikin, the first game was ultra hot. But in the end, I saw more stuff than he did, so it’s only natural that I won 🙂 .

Then there was the decisive match against Nepo, and I have to admit I didn’t make the right decisions, that’s for sure. First, I was surprised by the rare 8.Be3.

So I wasted a lot of time looking at 8…Ng4 9.Bg5!?, which could have been his idea. On 9.e5, which he played, I had several possibilities, not only that of taking e3. But I said to myself: “We’ll go for the simplest”; unfortunately, the simplest in question was not the best… So he took a large advantage, but then he allowed me counterplay. The critical moment was obviously after 19.Qa3…

With my back to the wall, I managed to introduce a good opening idea in the second game. And I got a very good position; unfortunately spoiled by bad decisions… First of all, 15.Nf4 was less accurate than 15.Bd2!.

But above all, 19.b4? turned out to be really catastrophic, instead of the normal 19.Nfe2 which kept the edge. In fact I completely forgot while playing 19.b4 – too fast! – that the black’s Queen was going to land on c4 via a6.

And finally, there is the last big mistake 25.Ng3? instead of 25.Nd3. In fact, after 25…f5, I wanted to go 26.e5 f4 27.Bxf4 gxf4 28.Nh5, but I quickly realized that Black is winning after 28…Bxe5! 29.dxe5 0-0-0!. As a result, I accepted to be worse after 26.exf5, and I quickly offered a draw. Anyway, there was really nothing to do here, except to lose! And I’ve lost enough games stupidly in must win situations, remember Jakovenko two years ago in identical circumstances…

Eliminated, I caught an early plane the next morning and found myself having to wait at home for the Nepo-Wei Yi final match. My destiny was no longer in my hands, but a victory for the Chinese would still have sent me directly to the Candidates! Unfortunately, the coin fell on the wrong side again, but I still made the decision not to give up the Rapid & Blitz World Championships in Moscow. I knew I was completely cooked physically, but in terms of effort it was less complicated anyway, and still quite fun. I also know that I have an ability to bounce back, so I went to Moscow full of innocent enthusiasm 🙂 . But let’s be honest, I’ve done a bit of a mess there… I’ve had three disastrous days, the first and third Rapid, and the first Blitz; that’s only two ok days… In the end, finishing 14th in the Rapid and 4-5th in the Blitz in these conditions, There’s not much to strut about, but given my state of form, I’ll take it! And given the level of my games, I have to take it even more 🙂 .

Now let’s look ahead to 2020, which is going to be a much lighter season. It will be an opportunity for me to get back to basics, both technically and physically. In terms of events, I will play in Gibraltar at the end of the month, Norway Chess at the beginning of June, and I will participate in the Grand Chess Tour 2020 for which I am qualified.
These are the only certainties at the moment!

If you want to know more about everything concerning the world championship cycle, the qualification for the Candidates, Laurent Vérat’s open letter on wild-card, the controversy that followed, but also the relationships between French players of the elite, the possible French naturalization of Firouzja, and many other subjects, read without delay the long interview given by Maxime a few days ago to www.chess.com .