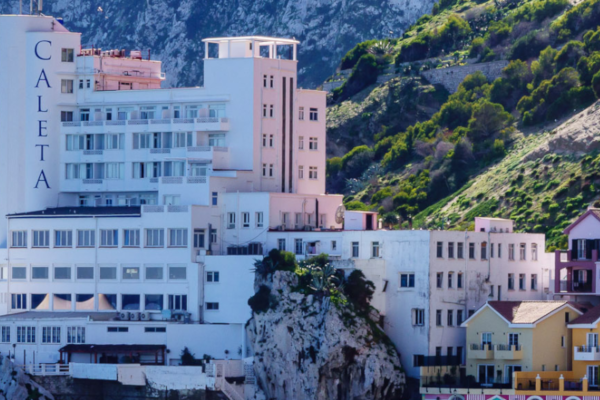 This is indeed the 9th time I’ve been here for the Grand Open at the beginning of the year in Gibraltar’s Caleta Hotel, a tournament that I particularly enjoy. After the tension of the last months of 2019 with the Grand Chess Tour and the qualifying tournaments for the Candidates, it was nice for me to play an Open, most of the time with opponents I had never played against before.

This game against an Indonesian IM was a good warm-up to get into the tournament. There were many lines to calculate, after 14…Qb6 already, a move that forced me to sacrifice a pawn. Generally speaking, there were quite concrete things to evaluate, including a few nice lines 🙂 . For example, after 22.b4 :

The French IM played a line from the Grunfeld Exchange that I knew, of course.

Indeed, the final position is the famous Vancura draw in the Rook endgame, known for a century. So if there is any refutation, it would already have been found 🙂 .

A power outage was the highlight of the round 🙂 . It affected the whole neighbourhood! Luckily, the Caleta Hotel had quite a few small desk lamps that worked without electricity, which were to be used for the closing ceremony. Some brave players had chosen to continue the game in this kind of subdued atmosphere… Others, including my opponent Tal Baron, kept thinking in half-light, clock stopped; which turned out to be counterproductive in his case, since he made a fatal miscalculation as soon as play resumed!

After a near-theoretical draw against Vaibhav, I had white against the Turkish GM Sanal; the only one of my 6 white games that I didn’t win 🙂 .

So I played 13.h3 0-0 14.c4, with the idea of surrounding the b3 pawn. But it’s a slow plan and I think he didn’t react very well because he let me regain the advantage. Except that I myself mishandled the position back, and I even had to be careful in the endgame in order to draw.

All in all, the first half of the tournament was quite uneven, with a few games where I calculated rather well, and some quite ugly games, I’m thinking in particular of those against Flom and Sanal.

A rather well-controlled game on the whole, notably because I refuted his conception in the opening :

I didn’t know 10…Na5 immediately, and I found on the board the very interesting move 11.h4!?, while 12 other moves had already been tried in this position!

I don’t know if it’s that strong, but in any case, he fell directly into my trap, because after 11…h5?! 12.Ne3 Nxe3 13.fxe3, I already have a clear advantage. We’ll move on to the final episode of this game, already well documented on specialized websites 🙂 . In a completely winning position, I played a move that let him back in the game, but he had the same hallucination as me, thinking he was being mated, and he resigned!

Karthikeyan is a young Indian who beat me in the last round last year, despite my Najdorf turning out pretty well for me. This time, he played the opening well and managed to get the advantage, but luckily he underestimated his position twice, and allowed me to stabilize the game.

After another draw with Black in a very theoretical Grunfeld against Italian GM Basso – without ever being able to play for the win – I faced the Turkish Can in the penultimate round :

I think he made it easier for me by quickly entering a Queenless middlegame:

A win in this last round game wold give me a small chance to finish in the leading pack, and I had the pleasant surprise of doubling white against the former world junior champion. I played 1.d4, which seemed to me a relevant choice against this specific opponent.

The balance of this tournament is contrasted; 5.5/6 with white is very correct, but drawing all my black games against weaker players on paper cannot satisfy me. Of course, I finish in the leading group at 7.5/10 (with 6 other players). But as a symbol of the year, I ended up 5th in the tie-break (Elo performance), a very small point behind the fourth and last player qualified for the tie-breaks awarding the £ 30.000 first prize 🙂 .

I don’t have any tournaments scheduled before April or May, so it’s a good time to take stock and find ways to improve!