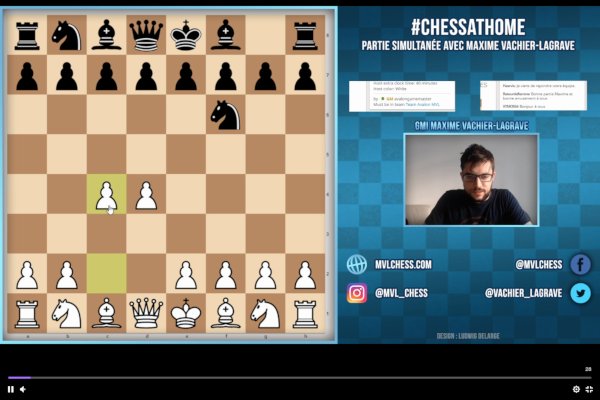 Like much of the world’s population, I found myself contained to my home due to the coronavirus directly after the Candidates’ tournament ended prematurely. The only world-class sports competition to resist the epidemic, the Candidates’ Tournament was the subject of a two-page report in the sports daily L’Equipe (with well-documented content since it was written by my manager, Laurent Vérat 🙂 ).

Like other sports events, the great chess tournaments are one by one cancelled or postponed (Grenke, Grand Chess Tour, Norway Chess, Olympiads…). This upsetting situation forces new practices.

One of the advantages of chess is that you can play it from a distance. In the last century, games were thus played by mail, telephone, fax… and even carrier pigeon! And now, thanks to the internet, you can also play live.

So my beginning of containment was the opportunity for me to participate in several online events, including a simultaneous, fundraising exhibition and the tournament organized by World Champion Magnus Carlsen on chess24.

The schedule of a top-level player leaves little room for meetings with fans. In order to bring a little distraction to everyone, I organized a simultaneous on Lichess on April 10th.

More than 470 people tried to win one of the 20 places available. I would like to thank all the participants, and sorry for those who were not selected. In addition to these 20 players, I had invited 6 people, including Ivan Ljubicic; the Croatian tennis player, after a brilliant career that culminated with a place as No. 3 in the world in 2006, is now the coach of my idol, Roger Federer.

He is also an excellent chess player, who has been playing for a long time, as reported in the article in L’Equipe published on April 19. He demonstrated this in the simultaneous, drawing after pushing me up the ropes. The simultaneous ended in a final result of 22 wins, 3 draws and one defeat. I ended up exhausted, but thrilled by the experience.

Kévin Bordi also took advantage of this period to organize a mini charity tournament on 11-12 April in aid of Médecins sans Frontières. The 1st semi-final saw Etienne Bacrot beat Matthieu Cornette. I played in the other semi-final, against Kévin Bordi in the 1st set, and Fabien Libiszewki in the 2nd. In the final the next day against Etienne, the latter got good positions but the time management was fatal to him; “too weak, too slow” 🙂 .

However, the best achievement of this weekend will remain to have collected the tidy sum of 11.250 €, more than double the initial goal!

You can watch this event again :

At the moment I am participating in the tournament organized by Magnus on chess24.com. With a very strong field (the top 5 players in the world as well as Giri, Nakamura and the rising star Firouzja), and an original format (pools and a play-off), the competition promises to be exciting!

In the wake of the Magnus Invitational, the International Chess Federation and Chess.com will organize the Nations Cup Online, a team competition that will take place from May 5 to 10. Six teams will take part in this tournament, which in a way will replace this summer’s postponed Olympics: Russia, USA, Europe, China, India, and a selection representing the rest of the world. I will be the 1st board of the European team, in a competition which will gather most of the best players in the world.