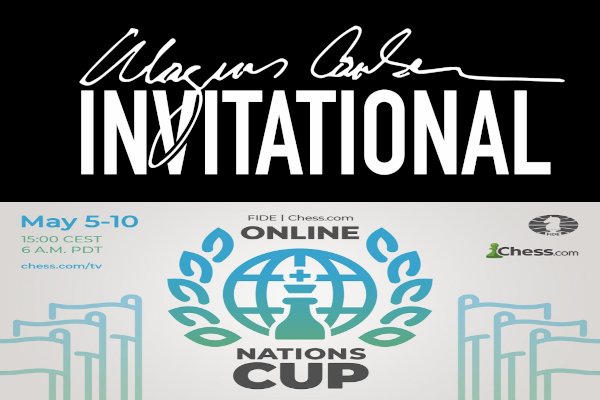 With the pandemic’s installation in the long term, the world of chess has gone online. Tournaments abound and the activity is more and more intense, for top players as well as for amateurs all over the world.
In the last few weeks, I have had the opportunity to play two online
competitions in a row, the Magnus Carlsen Invitational and the Nations Cup.

At the initiative of the world champion and his platform www.chess24.com, eight players met for a group phase qualifying the first four for the knockout rounds.

I think the system can be improved a little bit in the sense that, for example in the last round, there were a lot of games with absolutely zero at stakes. That’s the only downside, with the fact that the tournament was spread over a few too many days (16).

The next tournaments have just been announced, as part of an online « Carlsen Chess Tour », which takes over from the aborted 2020 Grand Chess Tour. The formula will be improved, including a much shorter group phase.

Four games in a row is pretty tough, though it might not seem so, but it’s still a manageable effort for the players. Moreover, the result over four games is obviously more significant when it comes to determining who was the best player of the day. So I have nothing against it.

I’m also sure that the show is rather pleasant for the audience as well, who was able to follow two games at the same time.

In fact, I can understand the idea of broadcasting two games at a time, not four, even if it makes the tournament longer. Four at a time would always be more complicated to manage technically, especially if there are Armageddon games, in which case it could quickly become very problematic.

All in all, it’s pretty nice to see online chess growing, though it’s a new experience. Of course, it’s not so easy to settle, but it’s been a bit of a challenge for (almost 🙂 ) all players. For me, it’s not easy to stay focused online, because the physical contact with the pieces is a bit lacking. And then there’s also the fact that we’re too used to playing on the Internet in one or three minutes. So 15+10 can seem like an eternity! I tried to manage all these parameters as best as I could…

For me, there was also the apprehension of « new openings », 1.d4 with white, the Slav and the Caro-Kann with black, which required a lot of energy. It caused some mistakes at times, because of a lack of experience in these positions.

It’s also true that if we add the third Armageddon game lost against Nakamura, these three defeats weigh heavily; in the end, it’s a last place instead of a mid-table ranking… But Armageddon is a rather special format for which I’ve never done any specific training. As a result, I don’t necessarily have the right calibration in terms of pace, between haste and loss of time. Also, my blitz style isn’t very well suited to Armageddon either; with black, I’m not used to playing for a draw with a minute less, and with white, I really try to put pressure on time, even if sometimes I have to go through some borderline positions.

It’s true that Armageddon doesn’t happen that often, but it’s a bit worrying to have a weakness like this one 🙂 . Yet I don’t think it’s a mental collapse or anything like that, but then again, I might be wrong… It’s hard to get answers on an exercise I’m not used to. But maybe that’s the answer; I’m not used to it!

Now let’s take a look at some of my performances in this tournament:

After a very bad game with white when a draw was enough, I managed somehow to save the day and reach the following position:

In the next two games, I experienced the horrors of the “mouse slip” and “misclick“: these are well-known dangers of online chess!

An instructive Queen endgame, with all the pawns on the same side, which one often tends to declare a draw without looking at the nuances of the position. Here, if we move back the f5-pawn to f7, it would indeed be an easy draw. As it is, I don’t know if the position is objectively winning or drawn, but intuitively I would rather say it is winning.

Indeed, with the pawn on f5, black’s King remains weak. It is very hard to avoid exchanging Queens. And when white will play g4, one will hardly escape from taking twice, after which white’s e-pawn will be passed.

But in practice in this kind of ending, it’s almost impossible to play without mistakes, especially in rapid games. And again, it’s always harder to defend because white can turn the position in any direction – which Fabiano did not hesitate to do! –

Chess is a complicated game 🙂 .

A few days later, I held the first board of Team Europe in this competition, which gathered six teams and which saw the final victory of the Chinese favourites.

My play was definitely better in this Nations Cup, but there were also worse moments. Admittedly, the final result is rather satisfactory (+1, =9). But there were a lot of missed chances, against Radjabov for example:

In short, I rejected the simple continuation, then the effective one, and I finally made the least good choice, 27… Rgd8 🙂 . After this error, the game became extremely messy and ended in a perpetual (draw, 36 moves).

It was also a weak game on the whole, which was especially noticed for the easy win that I missed, 32…h3!. Yes, it is easy, but this oversight is also explained by the fact that for the previous eight moves, I was calculating the consequences of …hxg3 at each move; therefore, …hxg3 was like « anchored » in me, and to some degree prevented me to consider …h3 (draw, 36 moves).

Here’s my only win of the tournament, after a good opening and a good middlegame:

Only the realization of the advantage has not been convincing, but there is still an explanation. In practice, the conversion of this type of winning position is more difficult than defence. Because of the mating net around black’s King stuck on b8, it is very easy to go wrong.

Then, when the position becomes objectively drawn, it is the opposite!

The position is very easy for me to play. Sure I can also make mistakes, but white has to watch out for every fork, every check, every pawn and it’s a real nightmare to defend (0-1, 111 moves).

It was therefore mainly for practical reasons that mistakes were made by both sides.

In fact, here the normal move was 38.g5! fxg5 39.fxg5 and Black continues to suffer. Instead, I played 38.Nh6, which is objectively less good, but with the original idea to trap black’s rook on h6 🙂 . By the way, Vishy also feared this variation since he did not play 38…Rg6 39.f5!? Rxh6 40.h5. During the game, we both considered that this strange position was favourable to white, while the machine seems to prefer black. The reality is probably that this endgame is a draw!

Even if the Rook is useless on h6, white will not be able to use their Rook vs Bischop advantage on the a-e columns if Black actively plays 40…c5, instead of waiting for white to himself open the position with d5! in favorable circumstances; for example 40…c5 41.dxc5 Bxc5 42.Kc4 Kc6 43.Re8 b5+ 44.Kd3 Bd6 and mainly because of the weakness on b2, it is white who must be careful – when black’s Bishop arrives on e5 – not to play Kc2 and allow the passage Kc6-d5-e4-f4-xg4 which would free the Rook from its prison!

In general, in both tournaments I didn’t cause enough problems with white, even if I got several good positions, ruined in only two or three sub-par moves. That’s also the 1.d4 effect!

However, the 25 +10 used at the Nations Cup is just not working. I think it’s much too long for online games. Even on the wooden board, it is already half-baked, either too long or too short. That is to say that it’s too short for you to be able to have really deep ideas, but it’s too long to be able to pose problems and set traps.

Antonio Radic is a Croatian chess player. Amateur away from competition since his youth years, he has the particularity to be the most followed YouTubers in the chess world! With more than 630.000 subscribers, Agadmator (it is his stage name 🙂 ) leads a community twice as important as Magnus Carlsen for example. Prolific author of educational videos, Agadmator has just decided to launch regular podcasts with personalities from the chess world. His first guest was MVL, with whom he spoke for more than two hours! It is to be reviewed here: https://www.youtube.com/watch?v=mZ_EWAwZYmw
Finally, the session ended with a blitz, commented by Agadmator:
https://www.youtube.com/watch?v=88N3UNeNoWM