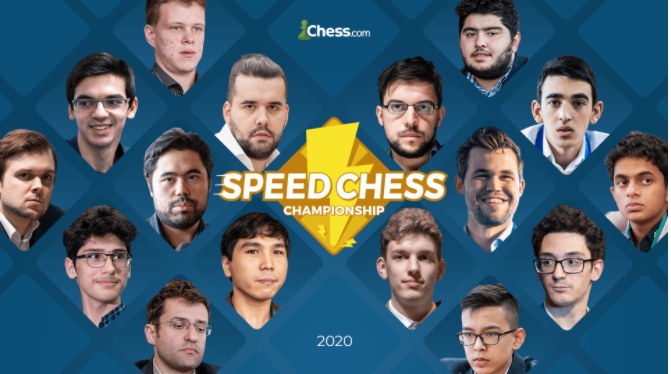 As every year, the www.chess.com platform organised its Speed Chess Championship in November-December, and the big novelty in 2020 was obviously the return of Carlsen, after several years of absence. 16 players, knockout format, each match consisting of a duel of increasingly faster games: 90 minutes of 5′, 60′ of 3′, and 30′ of 1′, with an unique increment of one second for each of the cadences; this is the recipe of Speed Chess…

I really like the idea of having a knockout format. The Speed Chess one is excellent, except for one thing, and that’s the main criticism I would have to make. As we are limited in time, certainly if the match is tight, it will be nice to watch anyway. But if it is really too unbalanced, after an hour and a half it can be virtually over, and we play another hour and a half for nothing. In that case, the players don’t enjoy the end of the match, and neither do the spectators. In this sense, I’ve been lucky this year, with some pretty tight matches that all settled down in the last hour. Of course, it’s also because I didn’t know how to kill some matches 🙂 . But elsewhere, this 2020 edition saw a few heads-up that were not necessarily pleasant to follow.

Another argument is that players have the possibility to slow down games voluntarily. For example, by going round in circles when leading on the scoreboard, in certain positions that allow this. That this little subterfuge is used by the players is normal, but they should not be given the opportunity to do so. So, for these two reasons, I don’t understand why we don’t start with sets rather than predefined time periods; with also a mix of all the cadences, in three winning sets. If the match is tight, it will last 3 hours anyway, and if not, then it will be shorter but the winner – for example 3-0 or 3-1 – will be indisputable.

With this reserve made, such a tournament, with almost all the best, it’s sure fun to play. It gives quality matches on the whole, except for some confrontations in the first rounds that were too lopsided.

Obviously, online Speed Chess cannot be compared to some major tournaments, such as the upcoming Tata Steel or the Candidates. But anyway, there is still a rather important dimension to playing these matches, trying to compete with all the best players in the world on formats that are rather long and therefore quite significant. So for me, a victory like the one against Magnus definitely means something 🙂 .

A tricky match, against the young Indian, always very dangerous.

I gradually took the lead, being four points ahead after 11 games, and that’s when I let him come back into the match, until only two points of gap remained in the Bullet. But after that, I managed to get back into the race and I took two, then three points of advantage, including three victories in a row.

This is the really critical game because, even if I got a very good position at some moments, he had a nice opportunity to come back to only -1.

In general, I think that the openings went well, especially with black, even if I had some difficulties with the closed Sicilian. Afterwards, Carlsen and especially Nakamura, took up these kind of variations against me.

Once again in this match, I couldn’t make any difference. In particular, I was three points up at one moment and I lost my last three black games of the 3′ segment, and quite stupidly so. Even if it is not forbidden to lose games against Aronian, when you are at +3, you are not allowed to finish at 50%!

It was a very tense match! After two difficult first games where the positions didn’t really turn out the way I wanted, I had a little bit of help in the third one, which was also degenerating. Luckily, Magnus threw a large part of his advantage, and even ended up losing on time! That was the strong point that I was able to show in this match, playing fast and posing concrete problems almost every time.

After that, I managed to impose my play, and tried to have him slip on banana peels on just about every game, with a consequent success rate. However, I never managed to create a significant gap. Often, I was at +2, up to +4 in the Bullet. There, it should have been over, but I lost three in a row, even though they were tough battles. Luckily I managed to pull myself together for the very last decisive game, which I was happy to win 🙂 .

On the match’s physiognomy, I think the final result is quite logical, each of us having had our share of success.

I also want to point out that all games lasted very long. 24 games is really not much, it shows that all the games were hard-fought. Because even if I played fast, I often caught up on time at the end, either to conclude well or because the position had deteriorated.

What helped me a lot was that I quickly made a difference in the Bullet. So, even when he came back at high speed towards the end, I was still able to keep a minimal lead. The final 4-4 score in the Bullet segment seems justified to me, and if I had to choose, I would say that the turning point of the whole match was the last game of the 3′ segment.

I was obviously very motivated for this final, with the idea to confirm my performance against Carlsen, even if I had to play again the next day, whereas the other semi-final had taken place 72 hours earlier.

I think the level was very high in this final match. There weren’t many mistakes, even if I started the match by dropping a Rook in one move! In fact, I always managed to come back on the score and I was quite happy with my play throughout. The only problem, but that’s always the danger in a 3-hour match, is to lose some games too easily. There are at least two or three of them, and that’s already a lot at this level. Because the games I win, I have to go and get them – because of his consistency – while he got some easy points. On the other hand, I was ultra resilient in some games, especially the last one in the 5’ segment, which I should have lost 50 times and which I finally won, allowing me to stay afloat.

The duel remained very close until the beginning of the Bullet, where I won the first two; good games though… Then he came back to +1, and I guess the turning point was the 6th Bullet:

After having played Kg2-h2 for a dozen of consecutive moves while Hikaru was moving his heavy pieces without apparent goal, he finally played the tricky waiting move 55…Kg7, and after 56.Kh2?? (arrgh!) 36…Rxh4+.

Instead of equalizing, I found myself at -2, about 10 minutes from the end; too much of a handicap in front of such a specialist.

Now I want to confirm my progress in online chess, which I will soon have the opportunity to do with the second tournament of the Champions Chess Tour, starting just after Christmas (« Airthings Masters », from December 26th).

And I’m also looking forward to getting back to the « physical » chessboards, which will be the case in Wijk aan zee (Netherlands), where the Tata Steel starts on January 16th. Please note that I will be there from the 5th of January for a 10-day period of penance, in full accordance with the Dutch sanitary regulations 🙂 .

Absol is a renowned Youtuber in France, whose particularity is to manage a main channel (Absol Videos, 407k subscribers), but also a secondary channel (Absol Human, 45k subscribers), mainly dedicated to chess games against different guests. A few weeks ago, Maxime went to visit him and played three games against. To spice things up, the French champion was having a certain handicap, as he just played without his Queen! Quite a challenge against a club level player, and not an absolute beginner…

If you want to watch the videos, it’s this way (in French):