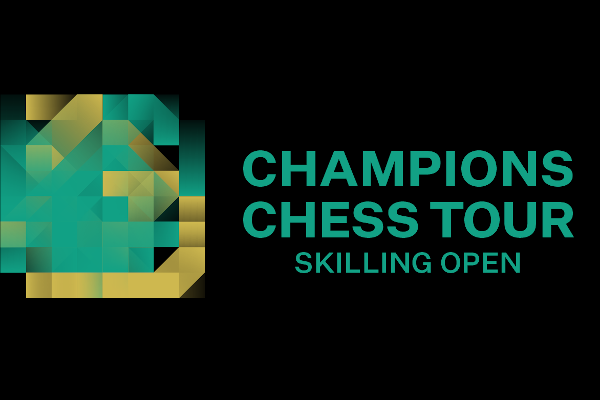 Magnus Carlsen always thinks big. After the Carlsen Tour born out of the pandemic, he and his associates have decided to go for it again with a new online circuit, the Champions Tour. This time it will be spread over almost a year and will consist of 10 tournaments in a unique nine-day format. The first of these, held at the end of November, was the Skilling Open. Overall, I found the competition was very well attended, with quite a few viewers; and quite a lot of support for me as well, which of course helped.

This circuit offers me the chance to show that I can do better than in the previous online Tour, so I decided to approach the competition in a rather serious way, with notably more rigour and preparation 🙂 . Clearly, I was better equipped at all levels for this tournament. I really wanted to see if I could compete with the best this time 🙂 .

On the whole, I am rather satisfied with the level of play I have shown, especially in defence. It also went better in the openings, where I came back quite a bit to my favourite lines, Najdorf and Grünfeld.

It’s true that in this period where there aren’t many physical tournaments, this Tour is very welcome. This being said, the danger of such a dense circuit, composed of 10 tournaments – even if probably nobody will play them all – is fatigue. By the way, these tournaments are very tiring in terms of energy. About five hours of play every day – and that’s not five hours of play in a classical game. It’s five consecutive games, and that’s a lot; that’s five times as many key moments, intense moments, sometimes with turnarounds. It’s obviously very, very complicated to manage.

Even though I finished the first day of the Preliminaries at -1, I was still happy, in the sense that I knew I was there, and that if I kept this level of play, I would qualify. Paradoxically on the second day, I can’t say I was that satisfied even though I won two games, because I felt I was starting to run out of energy at the end of the day.

These were in fact the first signs of what would happen next, especially in the quarter final’s second day. On the third and last day of the Preliminaries, the turning point happened to be my game against Svidler:

Against Ding Liren in the penultimate round, there was an interesting moment in the opposite-coloured Bishop endgame.

In this preliminary phase, I think I was not paid very well for my efforts. It is true that I qualified a bit by a miracle at the end, but it is also clear that considering the games themselves, I could have done it much more comfortably.

Objectively, this match turned out to be really unclear and very tense, and could easily have gone either way. I won the first set a bit of a snatch and then collapsed in the second, but I still had opportunities in the tiebreak that I could have – and should have – converted.

I opened the score in the first game, in one of the most analysed variations of the Berlin Defense.

In the last game of this first set – where a draw was enough for me – I quickly took a decisive advantage with black. But Hikaru has the impressive quality of being able to find practical counter-chances in almost every situation. I even nearly lost this game, from a position three pawns up 🙂 . Fortunately, I defended rather well when the situation threatened to become critical, and I found the right moves when I had to.

We finally got the following position:

In the second set, I wasn’t into it and it showed…

So it all came down to the tie-break. In the first leg, I think we produced a very high quality game for blitz.

The opening of the second blitz, where a draw was enough for me, went like a dream, when I quickly won the exchange. I regret to have taken material right away though, as the « draw blackmail » with 23…Na2! 24.Rc2 Nb4 would have forced him to play 25.Rcd2 Bxd2 26.Rxd2 Nd5 with an easier winning position. After 23…Bxc1 24.Rxc1 Nd5 25.f3, a straightforward liquidation solution existed however, guaranteeing at least a draw in the endgame… Simply 25…Rxc3! 26.bxc3 Qxb1 27.Rxb1 Nxc3 28.Rb2 Nxe2+ 29.Rxe2 exf3 and it would have been curtains on the match! Instead, I played 25…exf3?! 26.Bxf3 Qb5?! and in this position, it’s no more simple at all ; there are already counter-chances for white, based on the position of my king, on my black squares weaknesses, and on his white-squared Bishop, which is quite powerful. It’s not easy to manage such a position in a blitz game and the rest of the game was the proof of it! I quickly got into a lot of trouble whereas normally, after 22…Nb4, the game should have been over (1-0, 54 moves).

After this big miss, I couldn’t do better than a draw with white in the Armageddon. signing my elimination from the tournament.

Congratulations to Wesley So for his final victory in the tie-break against Carlsen himself.

For my part, I am happy to be qualified for the next Tour tournament, which will start just after Christmas. I will try to do even better in terms of quality of play.

In the meantime, I will be competing in the semi-final of the Speed Chess Championship against Carlsen, on the 11th of December, 6pm CET.

The series produced by Netflix is all the rage and everyone is talking about it. As for me, I was on the whole pleasantly surprised by the way in which the world of chess was portrayed, as well as by the game scenes themselves. In addition, the series is full of great images, with a nice soundtrack. On all these aspects, I have almost no complaints, especially since the acting of the lead actress, Anya Taylor-Joy, is excellent. But the flaw in Queen’s Gambit, in my opinion, is the script itself, which seems to me to be too light, as if a little sloppy. This reservation prevented me from really getting into the story and fully appreciating the series.
I had the opportunity to give my opinion to the daily Libération, on the series itself and on the situation in the chess world in general. Read it there: https://www.liberation.fr/sports/2020/12/04/echecs-the-queen-s-gambit-est-le-plus-gros-coup-mediatique-depuis-deep-blue-contre-kasparov_1807526 (paying article in French).