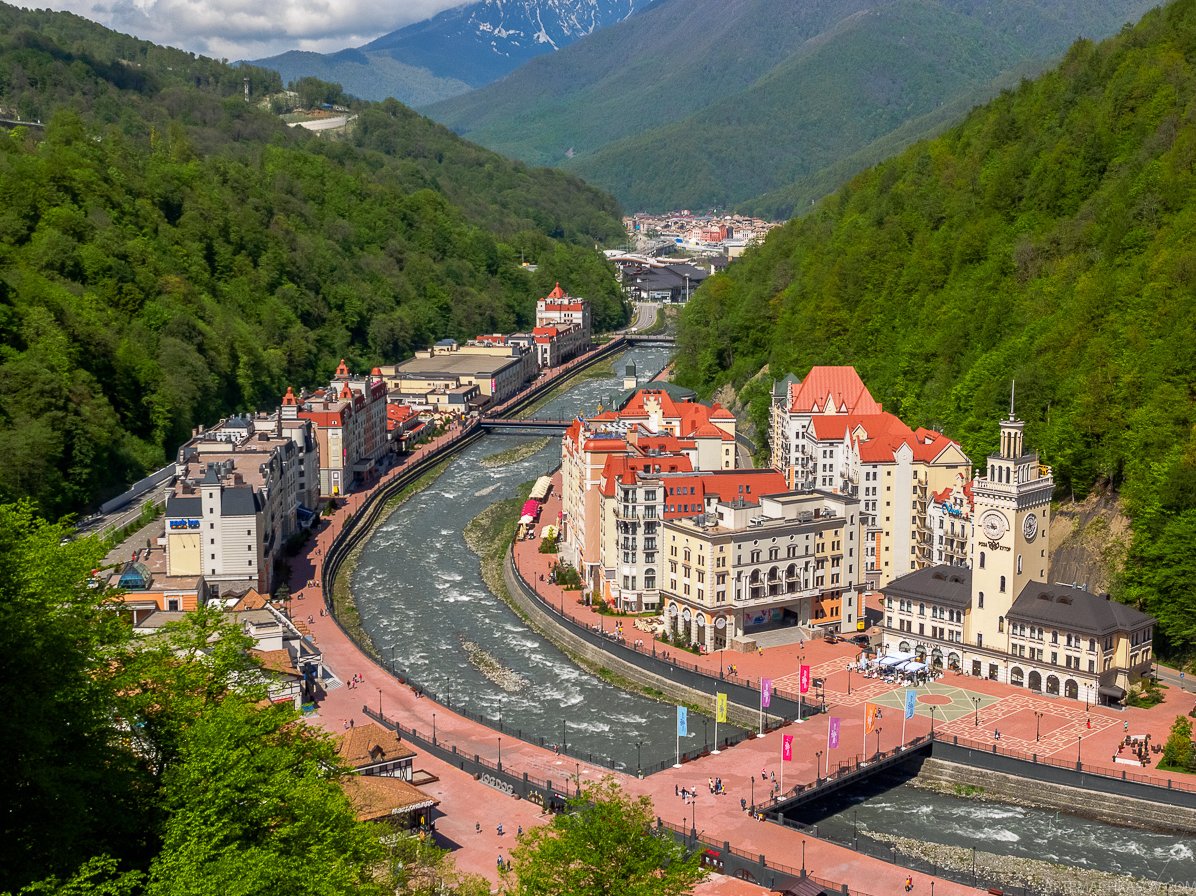 I arrived in Sochi on July 12, directly from the Grand Chess Tour in Zagreb. Etienne Bacrot, who was also qualified for this World Cup, landed in Russia the next day. We had 2-3 days to acclimatize well, and we were even able to visit the center of Sochi, which is quite nice. The tournament itself was not held in Sochi itself but in the surrounding mountains, in the heart of a ski resort.

Of course, in the middle of summer, the ski rentals do not work 🙂 . But everything else is open, like in the French ski resorts, including the sports facilities and most of the restaurants.

After these few days of settling in and resting, I went straight into the competition in the second round against the American Moradiabadi, for the beginning of a rollercoaster chess adventure, as often happens in the World Cup!

I obviously prepared myself for the match against Moradiabadi, who had benefited from one of the few withdrawals in the first preliminary round: but also for a potential third round against the Russian David Paravyan, because I knew that he was always very sharp in the openings and it was therefore important to have at least an idea of what I would eventually play against him.

This match against Moradiabadi was a little strange, in that I had such a dominant position in the first game, everything was going so well, that I have a little trouble explaining the events after the 40th move. My position looked like it was going to be converted at any moment. But because he kept finding the correct defensive moves, it wasn’t so easy really.

Missing this key move, I made it difficult for myself after 45…Qf8? 46.Nxf5 Qxf5 47.Rxd4 exd4 48.Qe4 Qf8?! (48…Qc8!) 49.c5!. Then I simply forgot that he could consolidate his position with the Queen on d3 and the Bishop on d2, and suddenly it went very wrong for me. I only saved the game in the end because under time pressure, he failed to convert and settled for perpetual check.

The second game was very easy on the other hand. Moradiabadi clearly did not play at 100% of his abilities in this game. He said afterwards that he was sick, but the line he chose in the opening is not very recommendable since I already have a clear advantage after 8 moves, although I understand that it may seem counter-intuitive at first.

I knew that the Russian was a clear favorite from his previous round against Onischuk, which he won easily in fact. I had a feeling that this match was not going to be a fun one, because Paravyan always has ideas in stock everywhere 🙂 .

I must say that the first game was not brilliant on my part. In fact, I had seen that there had been a few Maroczy played in the tournament and I was not sure what he had concocted for me. I wanted to choose a secure variation, but I didn’t really get much out of the position.

I was hoping to be able to press a little bit more, but in the end, it didn’t happen at all.

The second game was a bit livelier, with a huge mess on the board that didn’t go too badly for me. In the end, I even underestimated my position because I thought it would be a draw anyway.

However, I probably should have continued with 32…Nb4! instead of 32…Bh6 and offering a draw. In this case, it would have been up to him to show how he maintains the equality.

In the first tie-break series, I have a little regret because I had controlled the first game well against his line of the sharp, but very risky Svechnikov, and had obtained a convincing victory. And it’s true that after having such a dominant position, I thought it should go smoothly for the second game.

Unfortunately, I made the very bad decision to play 12…Nd7?. It’s an unusual move, I know, but let’s just say that from a distance it didn’t look as bad as it really was! After 13.Bxe7 Qxe7 14.Rhe1 Nc5 15.Bf1 Rd8, I think it was 16.b4! that I really underestimated. Besides, if there is no 16.b4, the position is not so bad for black. Despite his lack of time, Paravyan converted perfectly afterwards.

I was a little disappointed to have missed the opportunity to wrap it up, but that didn’t stop me from dominating the rest of the match.

In the first 10′ game, I chose the Berlin 🙂 , to be a little more solid, and I easily drew with black.

Then there was one terrible game in the opening, that Alapin one which went badly for me after the cold shower 10…e5!.

Maybe I had a way to do something better to equalize more easily, because 11.Be3 wasreally not a move I wanted to play!

Fortunately, Paravyan did not navigate the position well afterwards, and I could even have won at the end.

The young Russian has strengths, but even if his ranking at 2620 is clearly underestimated, he must also have some small weaknesses 🙂 .

In the blitz, I thought I’d win the first one with black, after coming back to a Najdorf that went perfectly.

But Paravyan demonstrated again one of his great achievements our match, namely the ability to perfectly defend difficult positions with very little time on the clock; it was an ordeal to try to convert the advantages against him, no matter how much I was ahead on the clock!

The second blitz resulted in an incident that I will explain here.

As a preamble, I must say that I should have seen a few moves earlier an elementary transition to a Bishop endgame two pawns up; it would have simplified my task and avoided the following mess 🙂 .

But the game continued and Paravyan claimed the draw by repetition in the following desperate position:

I knew that there was no repetition, but the arbiter ruled in Paravyan’s favor, because the computer confirmed his diagnosis! So I requested the VAR 🙂 .

I went to the arbiter’s table to show on the computer that there had been only two times the same position, and moreover, not with the same player on the move!

So I won the case, and the game resumed.

The next day, I spoke with the referee and got to the bottom of it 🙂 . He explained to me that it was a bug in the software, which had not refreshed itself from a previous game that had seen a threefold repetition!

That said, I felt surprisingly optimistic about this decisive game once I knew I would have white. Paravyan was always very short on time, so in an Armageddon with 4 minutes against 5, I didn’t see how he could hold on. And I did win that game without too much difficulty.

I started with a good draw as black.

In the second game, however, he did not play very well.

I think he should have played …a5 quickly enough to anticipate my b3-Kb2 plan, and have the break …a4 available. Later on, I sacrificed the Queen. Well, I don’t call it a sacrifice when you have Rook, Bishop and pawn, the Bishop pair, the open files and a central passed pawn 🙂 . I thought that even though it was probably not a forced win, it would be very, very complicated for him… Which it turned out to be.

In the first game, he popped out a huge prep in the Berlin, which forces a draw in a completely linear way. And he decided not to play the second game by taking a forced draw with white.

I was pretty happy with my prep in the first one, after using a sub-variation against the Berlin.

In the game, I was hoping to be a little better after the many exchanges leading up to a Rook endgame, but he defended very well.

After a solid draw in the second rapid, we headed to the blitz. The first one could have turned into a disaster because I thought I was following my prep, but in fact I wasn’t at all 🙂 . So I found myself in big trouble right out of the opening, and had to defend till the following position:

In the last blitz game, which decided the fate of the match, I followed the match plan established beforehand by opting for the London System. I took the advantage at the end of the opening, following a strange decision from him.

This is where I dropped the game by making a calculation mistake. I should have played 26.Rg1, but it was sad and I thought that I might even end up worse if he controls the queenside, puts the Knight on e6 and pushes …g4. So I chose to be active with 26.a4? Rxg2 27.Kf1 f3 28.b5? and I didn’t see at all what was coming up!

I was just worrying that the variation 28…g4 29.bxc6 g3 30.fxg3 e3 might be superior for black, when he unleashed 28…e3!, which I quickly realized was far more deadly for me after 29.fxe3 Na5!.The Knight goes to c4 or b3 with immediate devastating effect.

For me, it was a very close elimination, but in general, Karjakin was very, very strong in this match. Whether in his preparation with black, in his Rapid and Blitz skills, or in his ability to mobilize in the key moments, he was clearly up to the task. For my part, except maybe this last game, I don’t think I played a bad match.

On the whole, I found that my level of play at the World Cup was improving.

Finally, I would like to congratulate Etienne Bacrot for his excellent performance in Sochi. It took nothing less than the world champion Magnus Carlsen to eliminate him from the competition in the ¼ finals!

Congratulations also to the Pole Duda for his final victory. He and his opponent in the final Karjakin take the third and fourth places for the 2022 Candidates (Radjabov and the loser of the World Championship Match Carlsen-Nepo will have the first two).

The next step to qualify for the 2022 Candidates will be the Isle of Man Open at the end of October which, if it can be held, will offer the fifth and sixth places…

Despite the gradual resumption of tournaments, the pandemic continues to complicate the travel of professional players, who must constantly adapt to the requirements of different countries. Maxime experienced this once again at the end of the World Cup in Sochi. He stayed a few days after his elimination to support and help his compatriot and second Etienne Bacrot, who was still in the running (finally eliminated by Carlsen), and had to completely rearrange his schedule. Indeed, he was expected from August 15 in St. Louis (USA) to play the Sinquefield Cup of the Grand Chess Tour. But the American organizers warned him that he would not be able to enter the USA if he passed through a country in the red zone, which includes France – but not Russia 🙂 . So they proposed him to come directly to St Louis. So, Maxime left Sochi on July 31, heading for Missouri, without going through the « home square » in Paris: a journey of more than 35 hours, via Moscow and a night stopover in New York!