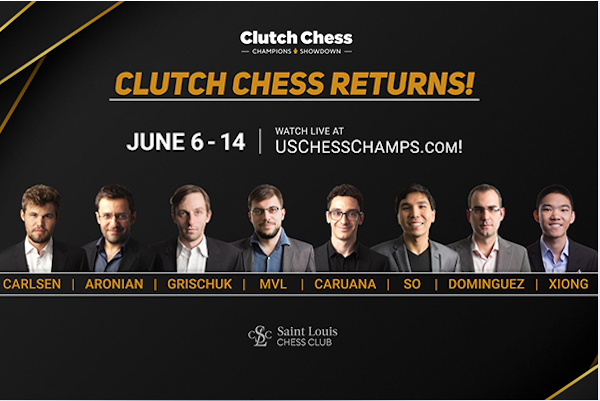 The American organizers were kind enough to invite me for their first « Clutch Chess International », an 8-player knockout format in the form of 12 Rapid games (10/5) played over two days. The novelty of the « clutch » is to give an extra value to the last games of each playing session; games 5 and 6 are therefore worth two points each, games 11 and 12 three points each. This formula has the advantage of keeping the suspense until the end and of giving an extra spice to the clashes, all the more so as each of the clutch games is endowed with a financial bonus for the winner!

As seed #2, behind Magnus, I was paired with Wesley So in the ¼ finals. The American had just won the inaugural edition of the formula, the “Clutch Chess Usa”. Generally speaking, I was dominated in this match, which I lost 5-13, the huge gap being explained by my score of 0.5/4 in the clutch games!

Especially on the first day, I clearly played very badly. You could even say that the result of two defeats and four draws was almost flattering, with quite a few games where I narrowly escaped, especially the first and the last one.

The real turning point of the day was undoubtedly game 4. I felt like I had negotiated the opening well and got a good advantage.

There was this critical moment when I realized that he was going to have …Rd3!, and unfortunately, I couldn’t find the solution, which was to start with 24.Bc4! Ra4, and only now 25.Be2, although it is true that the position remains rather unclear. How would the story have ended after 25…Rd3 26.Nc7?

Immediately afterwards, in the first clutch game, I found myself much worse very quickly. In fact, it’s because I mixed two lines, obviously 🙂 ; 10…a5? doesn’t work at all. After that, I managed to resist thanks to an exchange sacrifice, until I got what seemed to be a positional draw:

The last game of the day was a big mess! Still, I thought I got a pretty good position in the opening. But I didn’t handle the game well as I wanted to get back to the scoreline as quickly as possible. It didn’t turn out so badly because I finally drew that game, but it wasn’t very glorious, that’s for sure.

Then, on the second day, my performance happened to be significantly better. Admittedly, there was an ugly moment in the first game…

Then, in the third game of the day, I scored my only win of the match. In fact, I really wanted to win so that the next game would count for nothing, that I could play it in free style, and that everything would be decided in the mini clutch match at 3 points a game 🙂 . Again, I negotiated the opening badly, but Wesley allowed me to turn the position around, and I think I played very well from then on.

In the fourth game, which was therefore not relevant for the match, I played at full speed with black, and got the following position:

Thus, the decisive moment happened to be the first 3-point clutch game…

I had been back on 1.e4 for this great occasion 🙂 , and the opening went rather well.

After that missed opportunity, I made a few more inaccuracies, and I must say that Wesley showed himself quite convincing in realizing the advantage. Except though for the final episode, where he left a pawn en prise, before realizing that he still had a winning combination on the next move!

And in the very last game of the match, I couldn’t get back into it and I lost in a mere 15 moves without playing…

I would like to take this opportunity to congratulate the winner of the tournament, Magnus Carlsen, who prevailed after a particularly intense and spectacular final against Fabiano Caruana!

All in all, I have to say that I rather like this idea of having specific games that are « worth more », but I think there is a miscalculation that needs to be rectified. In fact, you shouldn’t have clutch victories as a tie-break, because it’s too much in fact; these games already give enough bonus points. Above all, it generates situations where, as in game 4 on the second day, the result doesn’t matter anymore. This leads to a game with absolutely no sporting stakes, which is not normal. So, I recommend that – at the very least – clutch games should not count as the first tiebreaker in the future.

The day after this premature elimination, I reconciled myself a little with online chess by winning the June 9th Speed Chess Championship on chess.com, https://www.chess.com/news/view/vachier-lagrave-wins-speed-chess-championship-grand-prix

Winning the Open section alone at 9/10, I then went on to beat the Uzbek Abdusattorov in ¼, the Vietnamese Tuan Minh Le in ½, and Firouzja in the final.

Next competition is scheduled from June 20th, with the third stage of the « Carlsen Tour », called the « Chessable Masters »…

MY BEST-GAMES BOOK AT THINKERS PUBLISHING!

Thinkers Publishing has been editing high-quality chess books for several years. The company is managed by my French colleague and friend GM Romain Edouard and the Belgian expert Daniël Vanheirzeele. The pandemic that hit at the beginning of 2020 has gradually stopped all tournaments in the world. Although I still had commitments looming on the horizon in online chess events, I felt it was the right moment to do something I had in mind, but never found the time to implement; write a book on the most interesting and important games of my career so far. So, what could be more natural than launching the project with Thinkers Publishing?
Guys, I’m getting started on it right now, and the book should be out in the fall of 2020!