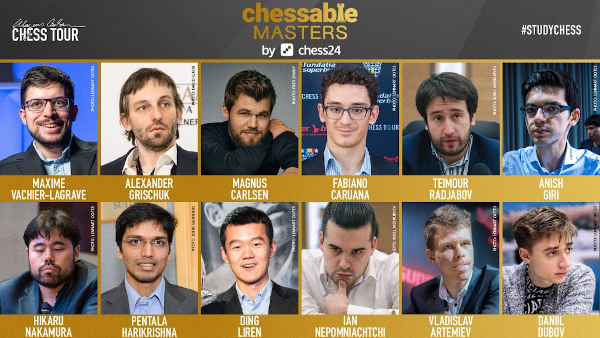 Unfortunately, the Chessable Masters, third tournament of the online « Carlsen Tour », didn’t end any better than the first one in which I had participated. Knocked out in the group phase, I had the confirmation that playing online at the same level as on the board was a real challenge for me 🙂 .

However, it all started rather well on the first day, with an unbeaten 3/5 in my group. But things took a disastrous turn in the second leg the following day, despite a rather quiet first draw…

It is against Radjabov that the trouble started, in a key game that went very badly; in general, one is disappointed by the loss of half a point when one does not convert a clearly superior position; but here I even managed to lose 🙂 .

But I played too quickly 20.Be2, and after 20…Rxd1+, again too quickly the stupid 21.Rxd1? while 21.Nxd1 would have kept the pressure on b7 and the advantage. A new inaccuracy a few moves later didn’t allow me to maintain the balance and I ended up losing a difficult endgame. (0-1, 52 moves).

I was destabilised by that defeat a few minutes before and I played much, much too fast against Caruana. Even so, I still managed to get an almost even endgame with black.

Here, I wasn’t sure what would happen if I stayed passive. Unfortunately, I didn’t give myself the means to know what would have happened either, playing 30…b6?! after only about fifty seconds – almost my longest think in this game 🙂 . This is the kind of nervous move that I can see at rest that it is not based on anything tangible. It’s a responsible decision which seems like nothing but leaves options to White – in particular the c6 square, which will turn out to be very important. I would finally lose a few moves later after a huge blunder, a natural consequence of a game badly approached on the psychological level… (1-0, 43 moves).

After that I was unable to refocus for the last two games and I let go, finishing with four straight defeats, thus equalling my sad record of the 2015 FIDE Grand Prix in Khanty-Mansyisk 🙂 .

The balance sheet of this small quarter of online tournaments is clearly negative. The « responsibility » I gave to the moves played on my computer was clearly far less than in a physical tournament. As a result, I made a lot of bad decisions. Add to this the difficulty of a new opening repertoire, which certainly worked more or less well, but which gave overall positions that I was less comfortable with. It was to be seen in the Slav with black, and a lot more on 1.d4 with white.

Finally, I have to admit a huge tendency to « tilt » as well, in my case clearly enhanced by the fact of playing all alone at home with no surroundings.

Thereupon, I must say that what Magnus did – just leaving home – was not stupid at all. He went to Denmark and approached the competition like a real tournament…

Caruana has also adapted very well to the online competitions, and has clearly been able to raise his level of play. Ding Liren too, which is particularly impressive considering the hours he plays, starting at 10pm local time.

I don’t know if these players had scheduled any specific training sessions. Did they play a lot online? Did they force themselves, in the preceding weeks, to take every game on the Internet as a real training? In any case, their approach proved to be superior…

In spite of this bad pass online, I’m not especially down, though disappointed of course, especially by what I showed in terms of level of play. In my defense anyway, playing on a computer for 4 hours is not necessarily what I like. And normally when I do, it’s with headphones and music. I was a bit confused by that because it wasn’t at all my usual playing conditions and it’s true that it also disturbed me a bit 🙂 .

If online tournaments become more or less the norm in the future, I’ll obviously have to think about how to handle that.

As a result of my bad results, the sports programme for the summer will be very light, and I am obviously still in the starting blocks for the resumption of the Candidates’ Tournament, about which we should have more specific news by the end of July.

So, from there, I’ll step up the pace, try to analyze things carefully and decide on the plan for the second half of the tournament. I’ll also have to bring the opening preps up to date; even if they weren’t so bad in Yekaterinburg, there’s still work to be done…

Because it would sure be a shame to play again at the level I showed during the online tournaments 🙂 .

It’s no longer a mystery that Maxime supports the Olympique Lyonnais fervently. An invitation in a flagship show on OL TV had unfortunately not materialized last year. But a few weeks ago, the website specialized on Lyon football « Le Libero Lyon », which is an independent reference media with a very specific tone, offered him to record a podcast on « My OL – Mvl’s dream 11 ». The result is half an hour of discussion about OL, football in general… and chess! http://www.leliberolyon.fr/podcast-du-libero-lyon-mon-ol-onze-maxime-vachier-lagrave/8381 (in french).