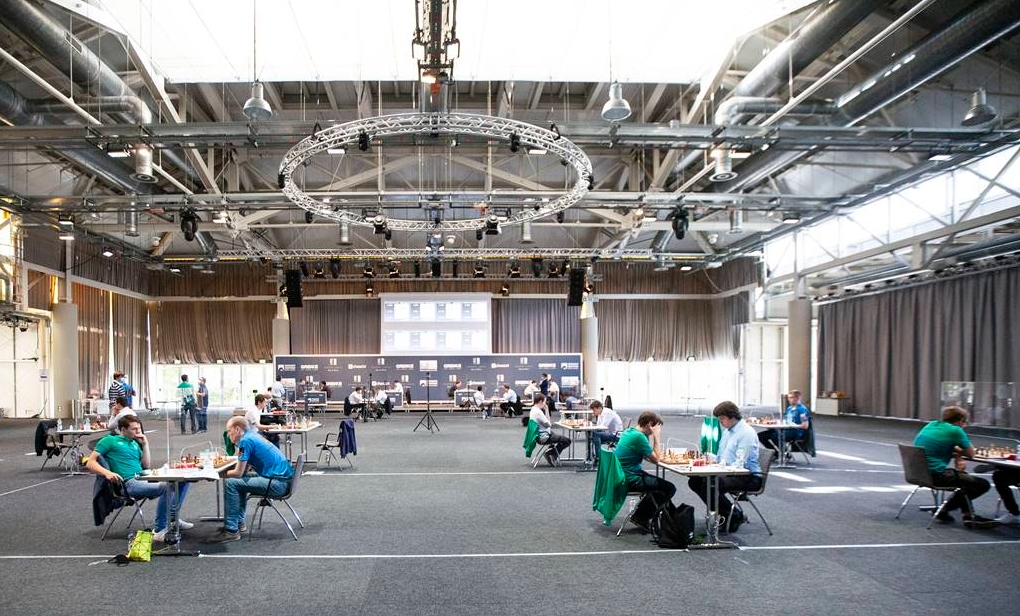 For me, the start of the new school year in September was marked by a succession of three tournaments. The first and the third would not deviate from what has become the new standard for the last six months, and were obviously held online.

The Saint-Louis Showdown, from 11 to 13 September, had the particularity of being played in Chess960, a format that offers the advantage of not requiring any work on the openings. So I prepared very simply, by playing a few practice games against Stockfish, the result of which I will keep secret so as not to damage my self-esteem 🙂 .

10 players, an all-round format over three days, the presence of world champion Magnus Carlsen, 960 world champion Wesley So, the legend Garry Kasparov and rising star Alireza Firouzja – this made the competition very attractive! In spite of that, it took me a barren spell of 5 games before I could settle my play. In particular, I lost the first three, against Carlsen, Caruana and Nakamura. The one against Caruana hurt me most…

Here, a normal move like 28…Rd8 would have left black with a more pleasant position. Unfortunately, I had anticipated the follow-up and I (too) quickly played 28…Qxg2?? which loses directly after 29.b4! because the Bishop is overloaded and cannot prevent Rb6 and Re7 at the same time, with mate on b7 (1-0, 38 moves).

With 0.5/5 and being a deserved laggard in the tournament standings, I got a gift from Svidler who declined a perpetual to self-destruct, then from Dominguez who made a decisive mistake losing a pawn on the third move!

I continued with my only clean game against Aronian, before an ultimate fighting draw against Kasparov.

With a final score of 4/9 and a 6th place in the rankings, I almost saved my bacon, but it is clear that the path to it was rather ugly…

On 23 and 24 September I took part in the final phase of the Banter Blitz organised on Chess24. 16 players in the bracket, knockout matches at the best of 10 games (cadence 3/2).

The idea of this formula is to make the broadcast attractive because the matches are commented live by the players themselves. It’s rather nice to share your emotions a little bit, like what I think about during a game. But it’s never easy to play and talk at the same time, and I have to say that I feel I’ve really played the game – and probably talked too much 🙂 . For sure it’s exhausting, but fortunately it doesn’t last that long.

In terms of results, I’m not unhappy with what I’ve done on the whole, even if, when I play online, I often get slack, like I have blanks that cost a lot. In the 1/8th final against Oparin, my team-mate in Asnières, I was able to control the situation (5.5-1.5), but it didn’t go the same against Wesley So in ¼ finals. I was leading 4-2 – certainly against the run of play because I had been under pressure in most of the games – before collapsing and losing 4-6.

I think the turning point of the match came in the 9th game when the score was 4-4:

In this slightly superior position I was really unlucky as I played 31.d5? immediately realising that it was a blunder because of the « coming from nowhere » tactical resource 31…cxd5,and if 32.cxd5? Ng5! and I lose material. But apparently Wesley hadn’t seen it according to his stream, and maybe I should have bluffed and quickly taken back on d5. In the game, I just ended up a pawn down after 32.Nd2 Ng5 (0-1, 45 moves).

Of course, I am a bit disappointed to have lost this match, especially after having been clearly ahead, but then again, I had a 4-game long downfall, which is not manageable …

In between these two online tournaments, I had the pleasure of spending a week in Germany in order to get back in touch with the classic game of chess, face to face. Indeed, the Bundesliga had decided to organise a 2020 championship with 8 teams, while waiting to resume next spring the 2019/2020 championship which had been interrupted after 8 rounds because of the pandemic.

About sixty players met on September 16th at the Karlsrühe Exhibition Center, only a few kilometers away from the French border. Mention must go to the organisers who, despite the circumstances, were able to create a very pleasant environment and atmosphere in the playing hall. My coach Etienne Bacrot accompanied me in this mini-competition, but as a player since he too is a member of the Baden-Baden club. Germany required us to have a negative Covid test of less than 48 hours to enter its territory without forced quarantine, so we had to show great ingenuity to get it in the Parisian suburbs the day before departure 🙂 .

I started the competition on the second board – behind Caruana – against the German GM Heimann :

I must say that I got used relatively easily to the new constraints of the « physical » chess game; the Plexiglas which cuts the chessboard in two does not really represent a discomfort, and it makes it possible not to wear the mask. The obligation is only activated as soon as you get up from your seat. For my part, I usually wear the mask, but I allow myself a few « breaks »…

Same opponent profile as the day before, 28-year-old German GM with a ranking a little above 2600… I played a Hedgehog-type position that turned out well for me in a match that saw us score one of our three 7-1 in the competition (0-1, 51 moves).

Magnus’ Norwegian runner-up chose a line in the Semi-Tarrasch that I knew was dangerous for black since a painful defeat against Grischuk.

The only game where I suffered, after a good prep from the Englishman reputed to be « the strongest amateur in the world ». (1/2, 45 moves).

The decisive match of the last round, against the co-leaders from Viernheim. I had my second black in a row, against the very solid Russian GM Malakhov, and a small curiosity arose in the opening:

I had already reached this position against Xiong at the 2018 Isle of Man tournament. Except that because of move orders and interversions, my pawn was already on h6 instead of h7! A minimal difference, however, which should not modify the judgement of the position. So, I remembered what I had written here at the time, namely that my move …Kd7?! was not famous and that it was better to go 18…Nd7, with the idea …g6 and …f5.

By narrowly winning this last match, Baden-Baden has added another title to an already long list …

September is just over now, and it’s time to focus on the Candidates 🙂 , with a few days of holidays and the resumption of specific preparation. The first round of the tournament is still scheduled for November1 in Yekaterinburg, although, at the time of writing, I have no further details, and still no news of the health protocol…

Maxime’s game in the Showdown: