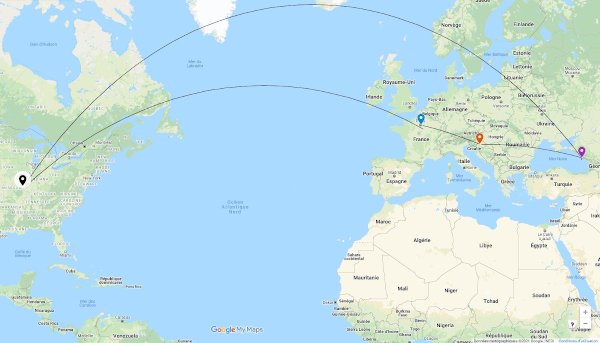 As I already explained, I arrived in the US very early – on August 1st – directly from Russia. From my hotel room in St. Louis, I had all the time I needed to deal with the jet lag, but also to work well in advance on my series of three tournaments, obviously giving priority to the first and most important of them, the Sinquefield Cup, which started on August 17.

Of course, I also kept an eye on the other events that were taking place during that time, including the World Cup semi-finals and finals, as well as the St. Louis Rapid & Blitz, in which I did not play – despite being a five-minute walk from the club 🙂 . Until the last day, there were uncertainties about the presence of some players, and several of them unfortunately could not make the trip, mainly because of the pandemic.

In St. Louis, wearing a mask was compulsory, but I had anticipated this by training for this new way of playing in the Bundesliga last year, even though it wasn’t compulsory! I don’t really have a problem with it. Other players have come to terms with it too, like Caruana, who used to find it very uncomfortable.

I enjoyed the fact that I had a rather favourable pairing, including five whites, and often against the lower ranked players, which is the best configuration to try to score points.

In fact, everything worked beyond my expectations in this tournament, especially the 4.5/5 with white. Because even though I played well in those games with white, and managed to put a lot of pressure on my opponents, there are certainly other circumstances in which the opponents would have found all the best moves until the end, which was not the case here! Svidler cracked. Shankland cracked. In a way, Swiercz also cracked, since after a meticulous preparation, with an hour’s advance on the clock, he went immediately wrong. I would say that I had a certain form of success, but it was provoked 🙂 . Another point of satisfaction is that I made very few miscalculations in the tournament: I made one against Xiong, but without any damage.

Anyway, I was very happy to get back to winning and I hope this is the start of a new cycle. Now that I’m back in the top 10, I hope to get a little closer to the first place in the next few classic events.

Here are some highlights from my tournament:

A very interesting game, with quite a lot of opening preparation on both sides, in the new hype 3.h4 against the King’s Indian / Grunfeld complex. It all came down to a bad retreat move by the Knight, which gave me the opportunity to show a very elegant zugzwang!

After an unspectacular but very complex draw against Rapport, I had to deal with another very targeted opening work from Shankland, who spilled his prep at full speed.

Unfortunately for him, he made a huge mistake further on in the game, by accepting a transposition into a losing pawn endgame!

I then lost to Dominguez, mainly because I forgot the correct Queen retreat on the 23rd move of an ultra sharp Najdorf line, though I had it in my notes 🙂 . Nevertheless, his brilliant refutation of my mistake must be noted, as it earned him the beauty prize of the tournament.

In one of the Italian’s fashionable lines, Swiercz also spouted his home preparation until the novelty 17…Qh4.

I quickly understood that if I played the natural 18.Nc5, he was going to throw out ten more moves of prep, which was confirmed to me thereafter:-) .

So I found an alternative with the Nd2-c4 manoeuvre, which has the double merit of changing the character of the position, and of taking him out of his book, which his very long reflection showed. After 18.Nd2 exd4 19.Nc4, he made the mistake 19…Rad8?, underestimating the strength of 20.Bxc6 bxc6 21.Bd2! ; in his defense, it was not easy to anticipate that black was already worse in this position. Instead of 19…Rad8?, he should have exchanged Queens by 19…dxc3 20.bxc3 Qg3! and the bishop pair will give white some compensation for the pawn, but probably no more.

As in the Candidates, Fabiano and I had a real theoretical fight on one of the big lines of the Najdorf. And after more than thirty moves of preparation 🙂 , we got the following position:

I was then able to score another win against the main line of the Berlin – which always makes me happy 🙂 – even if my young opponent Xiong made it a bit easier for me, not being a specialist of the opening.

In this game of the penultimate round, I wanted to play for the win because it was a good opportunity to put pressure on my opponent and challenge him for the top spot, not in the tournament, but in the Grand Chess Tour itself. But I also didn’t want to burn out my ships because I was also alone in the lead of the tournament. So with my team, we decided to opt for a very specific sub-variation against the Berlin, the one that the Russian Paravyan had played against me in the World Cup a few weeks ago, during one of my rare forays in this opening with black 🙂 .

So, after So’s 12…c6, I unrolled my prepared line 13.Ba3 Nd6 14.Qf3. He replied with the ultra-solid 14…Be6 15.Qf4 Be7, but I think white got a slight edge after 16.Bd3. Unfortunately, I was not able to to make this edge grow, and we quickly exchanged everything towards the draw. The game would have taken a completely different turn if he had chosen the tempting exchange sacrifice 14…Nf5 15.Bxf8 Nxd4: after a Queen move, 16…Qxf8 and the compensation is obvious. But I had cooked the spectacular 16.Qxf6! gxf6 (16…Qxf6? 17.Re8) 17.Be7, and the complications begin!

A quick draw in the last round against Mamedyarov allowed me to win the Sinquefield Cup alone, but also to finish second in the Grand Chess Tour, for the fourth consecutive year! A funny statistic.

Final standings of the Sinquefield Cup :

Beginning the last Champions Chess Tour tournament the day after the Sinquefield Cup was over didn’t feel easy to me. However, the St. Louis club had kindly taken care of the logistical setup, cameras etc… so that I could play in peace from one of their rooms, rather than from my hotel.

Obviously, I didn’t want to sabotage my tournament, but it’s just that I couldn’t really think during the games, and as a consequence, played much, much too quickly. I also couldn’t adapt to the time change, going from a 5pm start to a 10am start overnight, and even 9:30am given the set up needed for online chess..

I could only play correctly in sequences, and my final score of 50% (7.5/15) was not enough to qualify for the ko phase. As a result, the Russian Artemiev took the opportunity to steal the 8th place from me in the Tour rankings, qualifying for the final which will start at the end of September. I’ll probably get one of the two wild-cards anyway 🙂 .

Having been eliminated before the ko phase of the AIM US Rapid, I had a week to recharge my batteries before the Chess 960 tournament that would close my long American tour. So I decided to make a small infidelity to Missouri and spend three days in New-York, before coming back to my room at the Chase Park Hotel in St. Louis!

We were given 15 minutes before the rounds to analyze the new starting position between players. I often looked at variations with Levon (Aronian) and Fabiano (Caruana). To be honest, it’s often a bit of a blind guess, but sometimes you’re surprised to see one or two ideas that work.

In this new position, Fabiano and I had understood through our pre-game analysis the importance of the b4 square (and symmetrically, b5 for black). On b4, my Bishop prevents castling, controls the black squares and above all, is completely unattackable! The funny thing is that after the fourth move, I was already almost winning: 1.d4 d5 2.g3 e6 3.Cb3 Cb6 4.Fb4!.

Here is one of those games where during the brief preparation, I had found a good idea on the second move (yes, it’s 960 🙂 ), allowing me to equalize and even take the advantage with black in the opening.

Another example of successful preparation, but this time without the good result at the end!

Finally, let’s look at a rather spectacular sequence in my game against Nakamura:

Here I saw the forced winning line, namely 18…Bd4 19.Qxb7 Kf8! (frees the e8 square for the Rook) 20.Nc6 Re8 21.Nxd4 Qxd4, but I didn’t understand at all how winning it was for black! It must be said that it’s not obvious at first glance, but when you look closer, you realize that the d3-pawn is en prise, the Nb1 is offside, white’s King doesn’t flee to g2 because of …Re2+, my Bishop can sometimes come into play in d5 after a timely …d4 and finally, my King is in relative safety in spite of appearances!

So I played 18…Qxb4 which is less radical, but still should have been enough after 19.Nxb7 Rc8! keeping the terrible attack rolling. But I missed this last move and opted for 19…Bd4? which allowed a salutary exchange of Queens for white after 20.Qa5 Qxa5 21.Nxa5. The bishop pair still gives me an advantage in this position, but it becomes much more difficult, and I could not convert. As an anecdote about this funny game, Fabiano had taken a brief look at it live, and told me afterwards that he thought I was losing with my king on e8 ! In his defense, the positions of 960 after 8-10 moves are often extremely complicated to decipher!

So my long American tour ended on September 12 when my plane landed in Paris Charles de Gaulle. I had left France on July 3, so I was not unhappy at all to be going home 🙂 .

Maxime’s games at the Sinquefield Cup :

Barely arrived on the French soil, Maxime had just the time to put his bags at home before going directly to Asnières, where the Rapid Trophy of his adopted club took place.
A last minute improvisation which was a nice surprise for the participants, as well as for the elected officials of the city and the partners present. Maxime was also able to meet and encourage his coach Etienne Bacrot, who by the way won the tournament!